I was long hesitating if to put Monte Grappa on SP or not. It is not at all the question if it deserves to be here. My problem was that we did not do any hike on the mountain at all. Now the first draft of the page is here and I am really encouraging someone who knows Monte Grappa better to take admin rights of this page.

The Massif of Monte Grappa

By the standards of European Alps Monte Grappa is not a high mountain at all. But as it rises directly above the Venetian plane, it looks high and also is high, if you try to do the whole altitude difference. Hiking up, or biking. On the other hand, quite good mountain roads are reaching the very summit too, so almost all around the season Monte Grappa sees masses of visitors. The outposted position is a guarantee that in nice weather they can enjoy an endless panorama. The massif of Monte Grappa is positioned in Venetian Prealps, between the rivers of Piave on the east and Brenta on the west. Before reaching the plane, both rivers are cutting deep canyons in the mountaneous world. Also to the north the massif of Monte Grappa descends deeply down to the valley of Valbelluna and secondary valleys, which divide Monte Grappa from the much higher and attractive groups of Dolomiti Bellunese and Vette Feltrine. South of Monte Grappa you will find before the Venetian plane also a belt of gentle hills of Asolo, offering nice scenes wit their castles, vineyards and villas.

The summit of Monte Grappa - from the nearby Monte Pertica

The highest point of 1778 m is only one of many summits, rising out of the massif. The neighbouring ones are not much lower, rising above small plateaus, alpine meadows and forrested slopes. The broad area is cut by many valleys, going in all directions. Their origin is predominantly glacial, later additionally carved by creeks. So geographically the massif of Monte Grappa can be divided into: > Seren del Grappa, > Alano e Schievenin-Mure, > Valle San Liberale, > Valle di Santa Felicita, > Val Cesilla, > Asolane and Ezzelini hills.

The majority of Monte Grappa massif is built of limestone. The platform from the Jurassic period is sometimes mixed with carbonatic dolomite. The platform from Cretacious period is pure limestone. In the highest areas there are also Jurassic marly limestones and marls. On the western slopes of the massif, however, dolomites from the Upper Triassic period can be found. But those are lower areas above Brenta river.

Why To Ascend Monte Grappa?

On the massif you will meet visitors of all kinds: Hikers are using countless paths, nowadays well marked and connected into a most possible dense network. The big majority of paths were made during World War I, when both sides were holding positions on the very top of the massif. Hikers can do hikes of a very broad range - from easy and short walks over the summit plateaus and ridges, to steep and hard hikes up with altitude difference up to 1350 m. From the east also some quite hard ferratas ascend on top. Climbers are having their fun mostly on several crags, most of them can be quickly reached by mountain roads. There are no really high walls with solid rock in the massif. 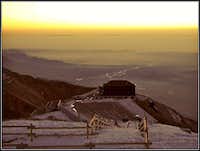 Monte Grappa is very popular with bikers. You can hardly see a mountain, where so many bikers can be seen. If they start their tour below in the vicinity of Bassano del Grappa, they must gain 1500 m of altitude. If they do a round tour, more distance is added to that. Crossing the whole massif towards the north is a great biking tour - very scenic and panoramic, taking a whole day! Many visitors are coming up just by car or motor bike. In addition to enjoying great vistas they learn many historical facts abouth the World War I on Monte Grappa. The great monument on the very summit is one of the most tributed places in Italy. Strong emotions and patriotism are bursting on the place. 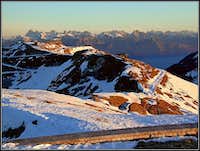 The view on Dolomites

Rising on the southern edge of Alps, Monte Grappa is offering two different kinds of panorama. Towards the south you can see the big North Italian Plane, far towards the lagoons of Venice. It is all urbanized, you will distinguish many well known towns and villages. Towards the north there are high Alps. The most spectacular are of course the sharp summits of Dolomites, but as they are already a bit distant, you should visit Monte Grappa in a day with clear visibility. Interesting are also the views towards east and west, alont the more hilly edge of Alps. There you can distinguish many lower Pre-Alps mountains, similar in nature to Monte Grappa. On the east the closest is Monte Cesen massif, on the west the hills above Asiago Tableland.

World War I On Monte Grappa 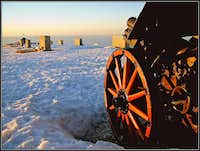 Italian people are considering Monte Grappa as one of their most sacred mountains. The reason for that is of course the bloodshed of World War I, when in 1917 and 1918 Italian army tried to hold positions on Monte Grappa, preventing the collapse of the front and consequently losing the big war. With huge losses they succeeded and that is why some historians are even calling Monte Grappa as the Termopilae of Italy. On the massif there were actually three big battles. After the collapse of Italian army at Kobarid (Caporetto in Italian language), the Austro-Hungarian Army pushed them as far as to Piave river. As Monte Grappa was still holding, Italian army was able to stabilise the front also on Piave river. The second battle was due to Austro-Hungarian offensive in 1918, starting on June 15. The offensive which started on 3 sectors, one of them being Monte Grappa, would perhaps be successful, but Italian army was able to hold positions until the situation on Russian front forced Austro-Hungarians to stop the offensive and move their forces there. And the last battle started on October 27th, 1918. This time it was Italian army which hoped to break the frontline with an offensive. As you might think, it did not happen again. Thousands of soldiers were actually killed in vain, because soon afterwards the war ended anyway. Only a small number of soldiers are today burried in the big "Ossario" on the summit of Monte Grappa. But their number is still 25000, from many nations of both armies. Source: Try these two links (in English): Link 1. Link 2. 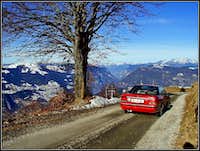 The mountain road over the massif

There are two approach directions to Monte Grappa. The most usual one is the road from near the town of Bassano del Grappa, which ascends the massif from the south (the left one on the map below). More towards the east there are some more roads, going up. They are more narrow and less often used by tourists. From the north, the roads starts up on Monte Grappa massif from near Feltre town - a bit west of it. And finally, for the "real" tours on Monte Grappa, the trailhead is in San Liberale valley. The big parking place at Rif. San Liberale is on 589 m. You reach there from Bassano del Grappa, driving towards the north-east to Crespano del Grappa and then towards the north into the valley. 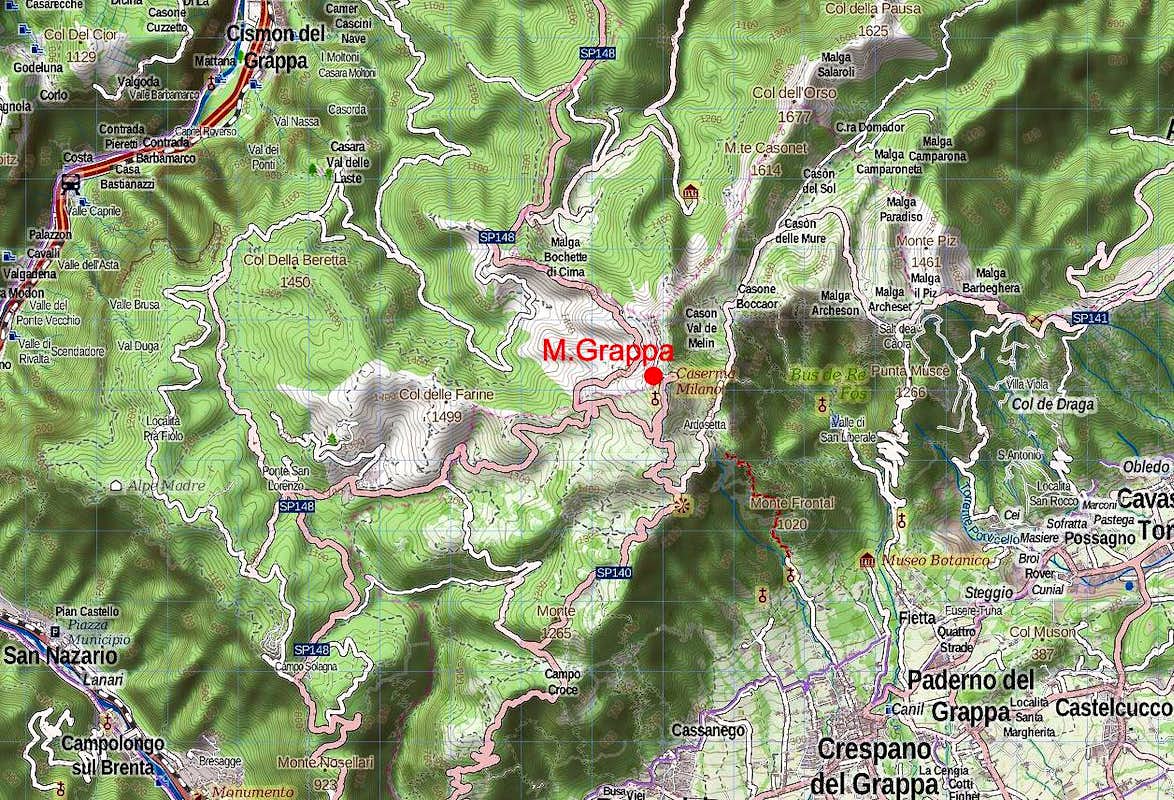 There are so many marked paths and routes on Monte Grappa that I must simply delay the task of even listing them for the future. The invitation can be only done that you consider one of the following two options:

1. Drive high on the mountain and then do one of the very panoramic round tours by the summit ridges and plateaus. It is only a question of your time, will and of having help of a good map. Otherwise all paths are well marked and equipped with inscription plates.

2. The second type of a nice experience would be to ascend Monte Grappa by one of the harder routes from the eastern side. Starting in San Liberale valley, on 589 m only, you can choose between two most known such ferratas:

a. Ferrata Sass Brusai exits on Monte Boccaor, 1532 m. It has steep, difficult passages and even a bridge from one of rock towers.

b. Sentiero Carlo Guzzella is easier (but still a medium hard ferrata) and exits on the slopes just below Rifugio Bassano. So, its natural goal is the very summit of Monte Grappa. In both cases and also, if you would hike up by one of mule trails, intuition tells you how great plan it is to bring first on top of Monte Grappa bikes. The descent to the parking place in San Liberale will be fast and joyful! If not having bikes, you can use normal paths for descent - some of them are also very nice.

I can warmly recommend the following site, even if it is only in Italian language: Magico Veneto - the subpages of Monte Grappa: http://www.magicoveneto.it/grappa/ For each area there is a map of hikes, some descriptions and many pictures.

You can request collaborative rights for this page. Otherwise, the following contributions are mostly needed: