On one hand Monte Pizzoc is a low summit, suitable just for hiking, on the other hand it is quite a broad area, which might offer also other interesting points to visit. I have collected just some information. If you have more, I'd be happy to give you editing rights to improve this page.

On Monte Pizzoc the Southern Limestone Alps reach much towards the south. A few western summits are higher and even a bit more towards the south, but the exposed position just above Vittorio Veneto town assures that Monte Pizzoc offers a nice panorama over the Po river plane - all the way towards Venice. On the other side in a clear day from the summit of Monte Pizzoc other higher mountains of Alps can be seen, in the first place the group of Monte Cavallo.

According to our classification Monte Pizzoc is the southernmost summit of Carnic Alps (and Pre-Alps); under the assumption that Carnic Alps occupy the whole mountain area to the line Vittorio Veneto - Sella di Fadalto - Piave river. According to this classification Prealpi Carniche continue from Monte Cavallo group towards the south and beyond the Cansiglio forrest finish with the rocks of Monte Pizzoc and a few lower hills below its summit.

The second opinion is set out on Fausto Carlevaris page of Prealpi Venete e Trentine. According to him, this broad group does not end on the east on the line Vittorio Veneto - Sella di Fadalto - Piave river, but continues further on Monte Pizzoc and Cansiglio forrest.

Monte Pizzoc is first of all a hikers mountain. As its summit can be reached by a mountain road, it is also a very desirable goal for bikers, but also paragliders and other outdoor sportists. In winter the summit can also be a nice ski tour goal, by the road even with cross-country skis, even if there are no special tracks. 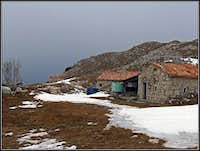 As said, towards the south Monte Pizzoc sends a steep, partly rocky slope all the way down to the Po river plane. The altitude difference from Vittorio Veneto (140 m) is considerable 1425 meters. On the southern terraces of Pizzoc massif some nice villages are situated, the whole are is rich with vineyards, orchards, old villas and cute villages. From Vittorio Veneto, or, to be more precise, from Serravalle, a sharp ridge ascends towards the summit of Monte Pizzoc. That is likely to be the most beautiful (but also long) ascent route on the summit. Towards the east and the north-east broad forrests stretch from the summit of Monte Pizzoc. La Crosetta saddle, on the east, would divide the massif of Monte Pizzoc from the rest of Prealpi Carniche. Towards the north, the edge of this broad plateau goes from Monte Pizzoc on a bit higher Monte Millifret, 1581 m, and then lowers down towards Lago di Santa Croce, 386 m. And finally the western slopes of Monte Pizzoc are steep again, falling down into the valley, running from Serravalle to Sella di Fadalto, 488 m.

The summit of Monte Pizzoc can be reached by a mountain road, opened for public traffic. La Crosetta saddle, east of the summit, can be reached either from Vittorio Veneto or from Sacile on the SE. Over this saddle a good road goes towards the north on Piano di Cansiglio and further on to Alpago. Just below La Crosetta, on the NW side, a mountain road deters up towards Monte Pizzoc. It is not in the best condition (2008), but still very much used, because of many alpine pastures and weekend huts around Monte Pizzoc. It reaches the summit and continues also a but further towards the NW, to Rifugio Città Vittorio Veneto, and a bit further more. Regarding hikes, the summit can be reached from many different sides, depending on how steep, long and enduring tour you wish to choose. You just need a map of the area to choose. many paths are also marked. Maps: Tabacco No. 12. 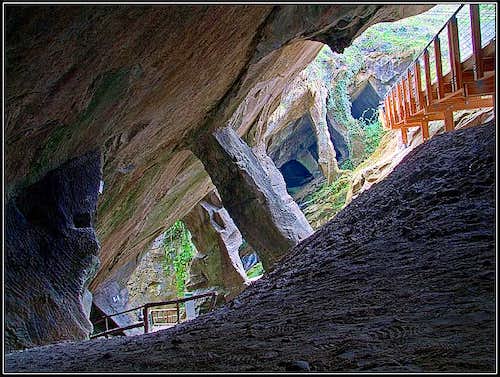 South of the summit of Monte Pizzoc, near Fregona (in Breda village), a small creek, flowing down the slopes of Monte Pizzoc, made some interesting caves. They are called the Calieron Caves. In the past, building materials were excavated there. Nowadays through the caves a quite interesting path is arranged, lasting some 30 minutes. Above, you first descend in the gorge, walk through the caves, exit them by an old, picturesque mill and then ascend over a natural bridge by the gorge to the starting point. 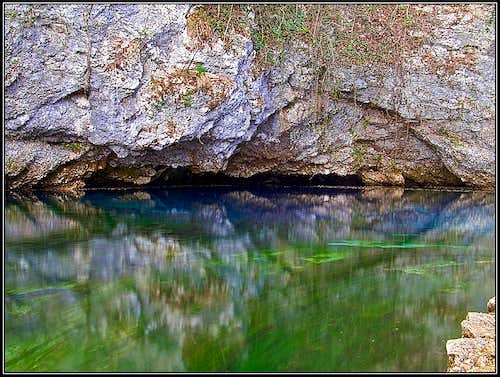 From the Southern Limestone Alps many rivers and creeks are flowing down towards Adriatic sea. Livenza is a special one. From its sources till the Adriatic sea it was once floatable for small ships. And, interesting enough, its sources are on the altitude less than 50 meters, below the eastern slopes of Monte Pizzoc massif. Then the river meandres slowly across the plane and because of its history, towns by the river, ex ports, are especially picturesque (Polcenigo, Sacile, Brugnera, Portobuffole and others, all the way down to Caorle). The river sources are three:

The northernmost is in the village Gorgazza. It's a small karstic lake, actually a syphon (or, the source of Vaucluse type), which is not fully discovered yet. A strong source comes from below a picturesque rocky wall (a cave, which collapsed).

The second source is the Santissima, named by a nearby old church. The nearby place is rich with archeological findings from prehistoric times. Between Polcenigo and Caneva ancient people were building houses on the water.

Molinetto, the third source of Livenza is a mile or two further towards the SW.

It is estimated that waters of all three Livenza sources, pouring through Late Cretacious limestones, are being gathered underground in territorry as big as 900 km2!

The old mill near Refrontolo

SW of Vittorio Veneto there is a hilly stretch famous by their vineyards. It's worth doing a panoramic drive through the country (by car or bike) or doing even a few short hikes by marked trails. One of such trails goes around the famous old mill near Refrontolo. 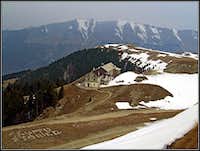 Monte Pizzoc can be ascended any time of the year.