Cima Carega is the highest mountain in Monte Lessini, a beautiful group above the famous Italian towns Verona and Vicenza.

Cima Carega chain from the NE, from below Passo Campogrosso 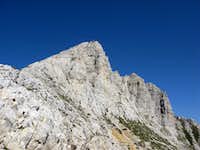 Monte Lessini belong to Prealpi Venete, the German classification refers these mountains also as the Vicenza Alps. Other neighbouring groups are:

- Sette Comuni (mountains above the Asiago Plateau - between the Astico and Brenta valley),

Claude Mauguier: Literature & civilization: This typical "borders" area hosts of not only strange and misknown mountains, but also an original cultural context. The former border between the old Germanic-Roman Empire, of which the former Prince-Archbishop of Trento was Elector, used to cross the territory, from the time of Karolus Magnus, until 1918. On both sides, various dialects were coexisting, sometimes a mixture of celtic with old-saxon and latin. As an illustration, the work of father Pietro Mercante : "Getze un sai taucias gareida = Giazza ed il suo dialetto" (Arnaldo Forni ed. 1978). On the Trento Province territory, the Val dei Mocheni is another good example of this. The most famous contemporary writer born within these mountains (Asiago) is Mario Rigoni-Stern, whose sensibility with nature, history and mankind gave us such works as : - Storia di Tönle, - L'anno della vittoria, - Sentieri sotto la neve,...and many others ! (English or German translations should be available). 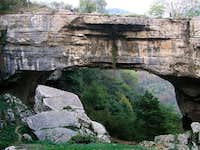 The group of Monti Lessini rises north of Verona and the river Po plane like a giant shell. From the altitude of around 2000 meters many valleys and ridges are descending down towards the plane. This world is covered with woods, vineyards and orchards, there are many nice creeks with old mills, waterfalls, and on higher regions also some stone formations can be found. In Valpolicella, for example, a huge stone bridge is a wide known landmark of Lessinia. Higher regions are bare, grassy, forming many broad plateaus and shoulders, up to some summits of these soft hills mountain roads are ascending. This is a great area for mountain biking and in winter for cross country skiing! The northern part of Monte Lessini is the highest one, there are some beautiful 'real' mountains, among them Cima Carega, the most valuable mountaineering goal in the group. It is worth to mention that also Cima Carega is not a single mountain, but a broad massif. Especially from the north one can beautifully see the wide rock faces of this chain, and also towards the south, towards the hilly lower part of Lessinia, some mountain crests go.

The summit cone of Cima Carega is put atop the wild crest of limestone walls, falling steeply towards the NE and N, on the place, where also the main side ridge deters towards the south. So, the most beautiful side of the Carega massif is the NE and N side, rising above Passo Campogrosso, 1456 m and the valley of river Leno. Limestone towers, walls, steep ravines, filled till mid summer with snow, all this rising above beautiful, green alpine meadows. That's why these and some neighbouring mountains are called also Piccole Dolomiti (The Small Dolomites). 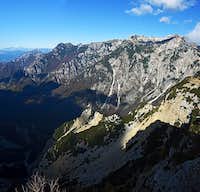 Carega group from the S

From the summit of Cima Carega a strong crest goes towards the SE. Some peaks in this crest are: Cima Mosca, 2141 m, Monte Obante, 2020 m and the wild group of Guglie dei Fumante with Cima Lovaraste, 1942 m. On Monte Obante the ridge turns towards the south. From the highest point towards the NW the second strong branch stretches. Two peaks in this crest are: Cima del Calieron, 2210 m and Cima Levante, 2020 m. On the W side the massif of Cima Carega is falling down into the deep valley of the Ala creek. From the highest point towards the south a ridge with many summits over 2000 m goes, connecting Cima Carega with the rest of Monti Lessini. The valley of Rivolto (Progno d'Illast creek) continues through Lessinia down to the Po river plane.

Claude Mauguier: A litthe ethymology: "Carega", means "chair" in many local dialects (Trento side), but might be a wrong transcription of an older "kar-eg", which structure shows a typical and well spread mixup of terms in Europe, associating "kar" (probably pre-celtic, with the meaning of "high point", "summit") and the celtic suffix "-eg" (written elsewhere "ac", then latinized into "-acus"), which means "...the place where is...."

Cima Carega is very popular for mountaineering. Because of so many approaches from the south, people are coming from different destinations. Also big cities of Verona, Vicenza and others guarantee that on nice days the slopes of Cima Carega are full of hikers - they are approaching it from the S. Also from the E and N some not so hard passages go over crests. From there the summit can be reached in some 3 hours. From the W, the road finishes in Ronchi, 687 m, so the ascent is considerably longer (more than 5 h). In good conditions (we were there end of May) the steep northern ravines and couloirs are a very nice goal for experienced mountaineers. From Passo Campogrosso over Cima Carega also the European long-distance hiking route (E5) goes. I have no information about hard climbing routes on Cima Carega (members, please add info!). Cima Carega also looks great for tour skiing: The easiest tour goes from Rif. Boschetto over the southern slopes. In good conditions also the northern ravines and couloirs should offer great ski tours of all difficulties. Southern approach by old military roads till Rif. Scalorbi, 1767 m is also a great biking tour.

Towards the north the view from Carega Summit flies to Monte Pasubio, summits above the Asiago plateau, and Cima d'Asta and Lagorai group. On the west the rest of Monte Lessini can be seen and beyond the Adige valley Monte Baldo. On the south Monte Lessini are lowering to the Po river plane. On the East one can see the forehills of Monte Lessini, the plane of Po and Prealpi Venete.

World War I on Carega

Claude Mauguier: This territory was close to the WW1 battlefieds. A lot of war remainings are found here and there (forts, trenches, barbed wires, etc...). A special path was labelled and settled a few years ago, with various highlight points. Just one title (there are many): Claudio Fabbro : "Sentiero della Pace", Euroedit.1997. This work shows a bibliography, but one may find a lot of written material about this period and these places in every serious bookshop. 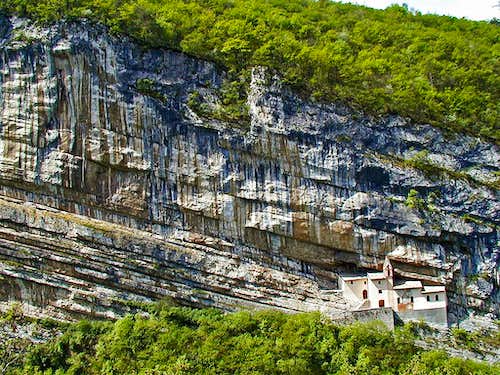 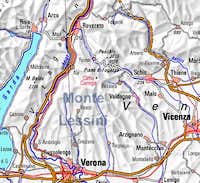 From the north, from Central Europe the valley of Adige valley can be reached by the Brenner motorway.

South of Monti Lessini the highway Venezia-Milano runs past Verona. From this highway, you can deter and drive north by the highway till Schio/Thiene, where you turn westwards towards Passo Pian delle Fugazze. Cima Carega can be reached from all sides.

From the south you can drive from Verona and its neighbourhood towards the north to Bosco, just past Giazza, 773 m.

From the east approaches go from Recoaro Terme. From this town you can drive up either towards W to Rif. C. Battisti, 1265 m, or by a good road towards the NW to Passo Campogrosso, 1456 m, where the NE approaches start.

From the N you must first reach Passo Pian delle Fugazze (between the towns of Schio and Roveretto in Adige valley). From there you drive 6 km towards the S on Passo Campogrosso.

From the west you start in Ala, Adige valley and drive towards the SE till Ronchi, 687 m, where the trailhead starts. 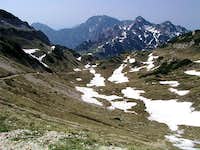 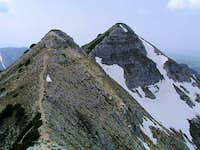 Cima Carega can be climbed any time of the year. Of course different routes have different best seasons. 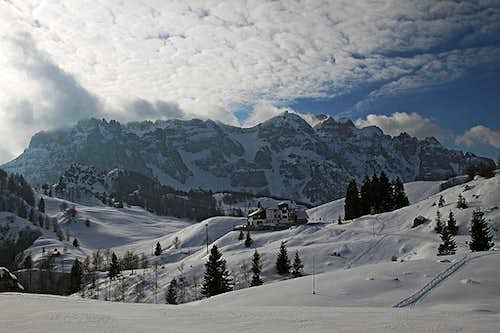 the road from Pian delle Fugazze to Campogrosso is open only between 5 and 8 in the morning ...
so the best way to get there is starting from Vicenza (or, better, from Montecchio exit of motorway ) follow to Valdagno, Recoaro and on till the pass.