Its western boundary is the SS 421 (Molveno and Tenno lakes) and the eastern one is the Val Lomasone, so :
from W to N : Giudicarie Esteriori, Cadria, Gavardina, Carè Alto, Presanella and Brenta Groups
from E to S : Paganella, Bondone, Garda lake

At its feet, steep and wooded , the built up area of Favrio, the Ballino Pass, the Torbiera (turbary) of Fiavè, the Tenno lake and the old small town Borgo Canale.

Its eastern side is little accessible and has overhanging rock walls.
Along its slopes run the forestal roads of Misone (starting from the turbary) the one of Misonèt (starting near Favrio) and 3 main paths (412-432-433) winding into a thick vegetation of conifer and beechwood: they become very panoramic once out of the woods giving fine views on the meadows of the mountain pastures.

The mountain is made of grey limestones: sedimentary rocks of Triassic & Jurassic eras (190 millions of years ago).
These rocks are part of the many faults parallel to the Giudicarie line (Monte Cogorna ,in front of Misone, Monte Casale, Monte Brento, the Colodri, the Placche Zebrate) that, for the compression, have been overlapped each other producing very high and steep walls that are now training ground for climbers coming from the whole wide world. 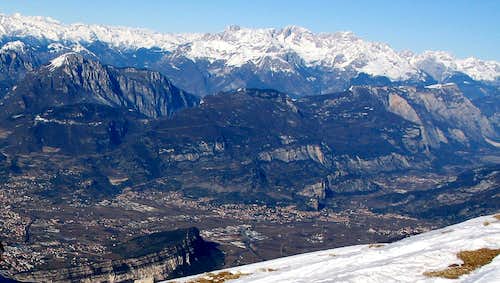 From Garda lake folllow toward Lago di Tenno.
Once in Ville del Monte follow for Canale and to rifugio S. Pietro (end of the road - car parking)
Herefrom, on foot along the path 412.
Along the steep slopes through a wide and harsch scree, along the slopes of Castiòl to the sella di Castiòl (1350m).
Now the path turns on the western side of Monte Misone and goes toward North crossing a thick wood of beeches, ariving, less steeply, to the pastures of Malga Tenno (1573m).
Following the signs in half an hour to the summit.
At quota 1803 a wide all round panorama.
On the summit pastures and overhanging rocks and, in spring and summer, wonderful flowerings.