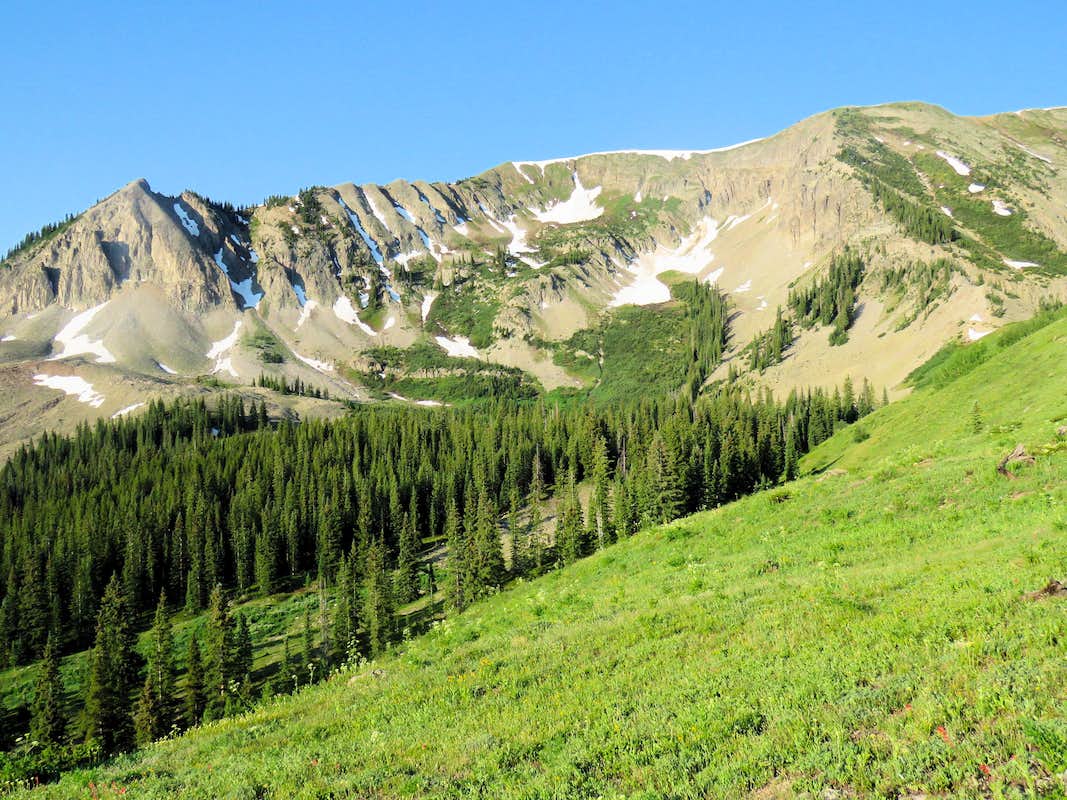 Northeast face of Mount Axtell from where I left the trail to Green Lake
Mount Axtell rises in the Elk Mountains of Colorado near the town of Crested Butte. While less than 2 miles away from Crested Butte on a straight line, Mt. Axtell is not visible from town. Its southwestern slopes are gentle and seem to be covered by a pine forest. I am not aware of any trail that goes up those slopes. The northeastern slopes are steep and rocky going down to the 10600 ft high Green Lake. A trail starts in Crested Butte and goes to Green Lake. The lake can also be reached via a shorter trail that starts on Kebler Pass Road. Before reaching the lake, I left trail and found my own way up a northeastern ridgeline on Mount Axtell. The lower parts of the ridgeline were steep and scree covered requiring much care. Farther up, trees brought some stability to the slopes. I found the summit register directly on top of the ridgeline that I climbed although the USGS Map marks a spot to the southeast as the true summit. Reaching the true summit seemed to involve an easy hike on gentle grassy slopes. Note about the trail from Crested Butte to Green Lake: Maps show a trail that starts in the town of Crested Butte and goes up a short distance to Journeys End Road, where you hike the road a little and then enter the forest on the trail only to find yourself soon on Wildcat Road where you again have to walk the road before finally getting onto the trail to Green Lake. When I was in the area I found that Wildcat was a private gated road and the sign on Journeys End Road said if you park here, you will be towed. You must therefore park in Crested Butte (no shortcuts). For this reason I decided to take the shorter trail from Kebler Pass Road to Green Lake. This trail required stream crossing.

Directions to trail to Green Lake from Kebler Pass Road: From the intersection of Route 135 and Whiterock Ave in Crested Butte, turn west to Whiterock Ave and drive a few blocks to the end of town where the avenue becomes Kebler Pass Road (Route 12). Drive this road about 1.5 miles until you see Wildcat Road on the left (south side). Right after that you will find a parking area and what looks like a trailhead but this is deceiving. No trails that I know of start at that spot. Continue say half a mile beyond that spot. You will not see any signs from the road or any parking areas. Keep looking at the embankment on the left (south) side of kebler Pass Road where you will find a trail going down to the river. There is enough room for a couple of cars to park on the left side of the road just to the west of the trail.

The summit of Mt. Axtell is visible from Kebler Pass Road. Mount Axtell
Follow the trail, which starts as an abandoned four wheel drive road, a short distance down to reach Coal Creek. You will have to cross the creek here. When I was in the area, the creek was one foot deep. The trail goes into a pine forest and begins to go up rather steeply. Trail in the forest
You will eventually reach the crest of a broad ridgetop where Mount Axtell will come to view. The trail continues on the south side of the ridgetop going down to Green Lake. I left the trail at that spot and headed west southwest toward Mount Axtell. Whetstone Mountain from the ridgetop. Whetstone Mountain
The ridgetop is at first grassy. Green Lake from ridgetop. Green Lake
The grass will soon go away and the ridgetop will become covered with boulders. As you go higher, the boulders turn into smaller talus over a steep slippery slope which requires attention. Ruby, Owen and Purple Peaks. Ruby, Owen & Purple Peaks
If you make it past the slippery stuff, you will reach trees which make the slope more stable. It still remains steep. Follow the ridgetop uphill. Green Lake and Mount Crested Butte from near the summit. Green Lake & Mt. Crested Butte
I found the summit marker and register right on top of the ridgetop that I climbed although the USGS Map marks a spot to the southeast as the true summit. Unlike the steep rocky slopes that I climbed, the slopes on the other side (southwest) were grassy and gentle. These pictures are taken from the northwest summit.

No permit or fees required.