Mount Hope rises to the north of Archuleta Lake in the Weminuche Wilderness of the San Juan Mountains of southwestern Colorado. A trail starts at Big Meadows Reservoir not far from Route 160 and goes 6.75 miles uphill to reach Archuleta Lake. Beyond the lake, the trail continues up the slopes of Mount Hope to around 12500 ft where you can leave trail and hike to the top of Mount Hope. A day hike to Mount Hope via this route will be 16 miles long roundtrip with 3600 ft of net elevation gain. 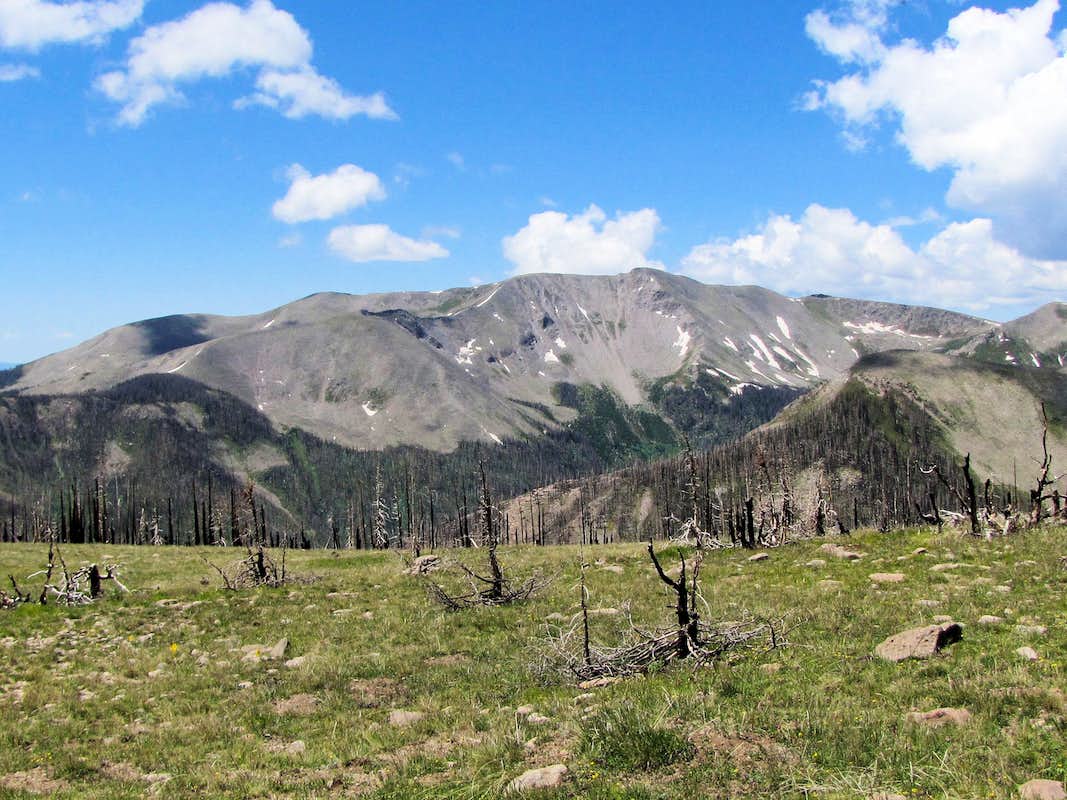 North face of Mount Hope from the slopes of Table Mountain


At the Big Meadows Trailhead, Mount Hope will not be visible and will not come to view until you get close to Archuleta Lake. Follow the trail on the northwestern shoreline of Big Meadows Reservoir heading southwest. After less than a mile, the lake ends. You will then enter the wilderness where you may find a trail register. The trail follows the South Fork of Rio Grande. The roaring river creates many rapids here.

The trail then makes a number of switchbacks going up to follow Archuleta Creek. When I was in the area, most of the trees seemed to have been killed by some type of a disease. As you approach Archuleta Lake, you can look north to see the southeastern slopes of Mount Hope. Dead forest below the lake. At 6.75 miles, you will reach Archuleta Lake.

Mount Hope can be seen to the northeast of the lake. 
Maps show that the trail goes to the far south side of the lake where it reaches another trail. If you turn right on the new trail, you will supposedly come back 100 vertical feet or so above where you first reached the lake. I left the trail where I first reached the lake and went directly up the grassy slope to pick up the trail again 0.25 miles later. The trail goes to a 12500 ft saddle to the west of the summit. I left the trail at some point going up first the grassy slopes and then the boulder field to reach the top.