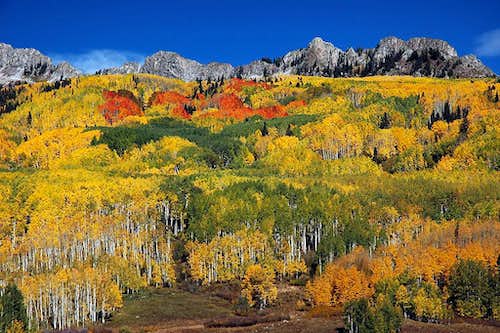 The Grand Dike above the aspen of Kebler Pass. Photograph by Chris Gerber

The Ruby Range is a southwestern extension of the main mass of the Elk Mountains. It consists of the same beautiful and loose rock of the Maroon Formation that makes (the Maroon Bells) such lovely and dangerous showpieces of the Elk Range.

This 300 million-year-old formation of tilted horizontal layers of mudstones and sandstones is a mountain range reborn. It (like the Crestone Conglomerate and the Fountain Formation) eroded off of an ancient mountain range (the Ancestral Rocky Mountains) to be deposited in the Central Colorado Trough; when the present Rocky Mountains were hoisted skyward this poorly consolidated slag pile rose again.

About 70 million years ago the Maroon formation participated in a tremendous movement of the earth; as the Sawatch pushed up a huge section of the Maroon Formation (4 miles thick and 30 miles across) broke along the Elk Mountain Thrust Fault and relocated itself miles to the west. About 34 million years ago volcanic intrusions helped push the overlying sediments up and formed the laccoliths of the northern Elk Mountains and Raggeds.

The white intrusive rocks of this Tertiary invasion are intermixed with the older sedimentaries and comprise the numerous dikes that dissect the Kebler Pass region, as well as the laccoliths that dominate the nearby Anthracite and Ragged Ranges. The Grand Dike running due south from Ruby Peak is the foremost representation of the wicked walls formed by these Tertiary quartz monzonites. The large image above looks down the spine of the Grand Dike towards Kebler Pass with the Anthracite Range in the background.

To the south the Ruby Range is separated from the wild West Elk Mountains by Kebler Pass. Kebler Pass itself offers unparalleled access to two of Colorado's finest wildernesses; the West Elk Wilderness to the South and the Ragged Wilderness to the north. Within the West Elk Wilderness just opposite the pass from Ruby Peak and Mount Owen are the handsome Beckwiths (Kane has an excellent page on East Beckwith). The beauty of this region cannot be exaggerated.

Here is a 1900 black and white photograph by Louise Charles McClure depicting Mount Owen and the Ruby Range 100 years ago. 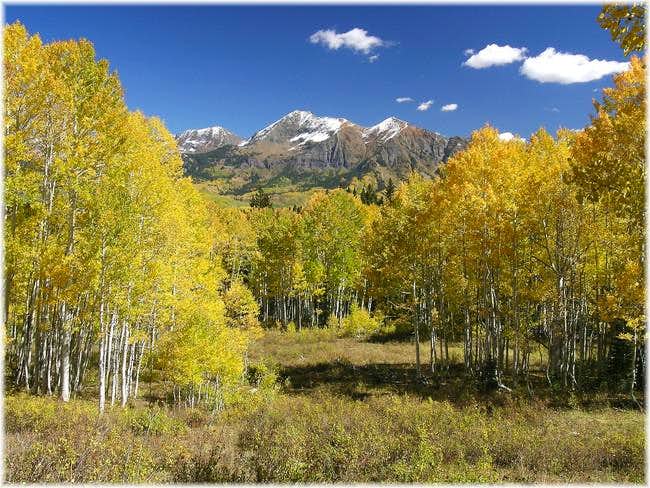 Mount Owen above the aspen of Kebler Pass.

Mount Owen is the high point of the Ruby Range (despite competition from nearby Treasure Mountain, the Colorado Mountain Guide gives the crown to Mount Owen, as Treasure is separated by Yule Pass and thus in the Ragged's sphere of influence). As the highest summit in the vicinity of Kebler Pass it stands as a monarch in this area of obscure summits and allows views into three designated wilderness areas: the Raggeds Wilderness, the West Elk Wilderness, and the Maroon Bells-Snowmass Wilderness. Below the inclined red and purple strata of Mount Owen lies one of the largest aspen stands in North America. Indeed the primary attraction of Mount Owen is enjoying the juxtaposition of the divergent geological compositions of the three mountain ranges that converge at Kebler Pass above the lush, primeval aspen stands. The Ruby Range summits, consisting of the tilted sedimentary sandstone/mudstones of the Maroon Formation, stand in sharp contrast to the white intrusives of the Ragged Range's summits to the west and the West Elk Mountain's breccia to the South.

Aesthetically Mount Owen is well disposed to represent the delights of the Ruby Range. Rising majestically above adjacent Purple and Ruby Peaks it fits in well amongst this profusion of ruddy hues. Viewed from Silver Basin Mount Owen appears a magnificent ridge rising above a wall that appears a purple pyramid fringed by a waterfall. Although the southwestern approach looks tempting the easiest route lies to the east.

Mount Owen's easiest route is a class one route that follows an improbable looking path up its South Ridge from the saddle between Ruby Peak and Mount Owen. This saddle can be accessed by an old mining road. Despite the narrowness of this undulating ridge a very passable trail goes all the way to the summit. The delight in ascending this mountain via its South Ridge is walking up this narrow sidewalk in the sky above rotten cliffs with a sea of aspen below. Mount Owen can also be combined with adjacent summits of the Ruby Range. Ruby Peak allows access from the south and Purple Peak allows access from the North (via Oh-Be-Joyful Pass). A very interesting route can be had by following Ruby Peaks South ridge to Ruby's summit and then following the standard route. This rather loose ridge flirts with the Grand Dike and offers some unparalleled scenery. 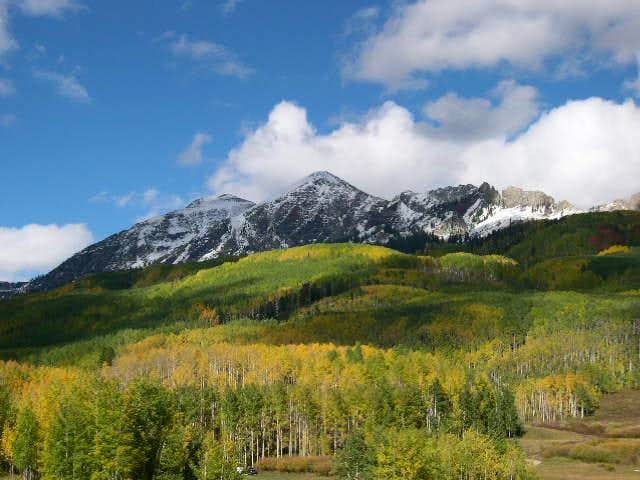 Ruby Peak is the 12,644 ft. southern companion of Mount Owen. Together they rise as twin sanguine sentinels over Lake Irwin. Ruby Peak is well named and its loose slopes are indeed a vivid shade of red. Ruby Peak is easily climbed along with Mount Owen and indeed its easiest route is from the connecting saddle. Alternate routes follow the Dike Ridge (south ridge) and south east ridges to the summit. Although the upper slopes are moderate both the routes flirt with loose rock. The Dike Ridge, in particular, is sublime but it is not the easiest route. Ruby Peak is the southernmost summit of the Ruby Range.

To get to Mount Owen one must get to the Kebler Pass region between Crested Butte and Paonia, Colorado. The quickest route from Denver consists of taking 285 to Buena Vista, going over Cottonwood Pass (an option only in summer/fall), following Colorado 135 north to Crested Butte, and then going up the Kebler Pass Road.

Alternately Kebler Pass can be accessed from Paonia by driving to the south end of the Paionia Reservior and then going east on the Kebler Pass Road about a mile past the Pass's summit.

The primary trailhead for Mount Owen is Lake Irwin. Approximately a mile before Kebler Pass's summit is the turnoff for Lake Irwin. From the Lake Mount Owen is obvious (its very red south face is quite striking), rising just to the right of the lower Ruby Peak.

No Permits Required. Mount Owen sits on the edge of the Raggeds Wilderness and wilderness regulations do apply. The primary headache is the private property in the vicinity of Lake Irwin. Avoid the Private Property signs and stay on the road till above timberline and everything will be fine.

Without a doubt, the best time to ascend Mount Owen is in the fall. The aspen stands of Kebler Pass make an ascent of Mount Owen during the peak of the aspen season akin to spending time in Munich during Oktoberfest or Rio de Janeiro during Carnival. Summer is acceptable as well. Flowers are prolific and spectacular in this region just west of Crested Butte, "Wildflower Capital of the World". Come Winter the Kebler Pass Road is not plowed and the only access is via snowmobile.

There is a campsite at Lake Irwin but the forest service posts it as "Closed until further notice". However camping is available both above timberline (away from the Private Property) and in the vicinity of the Dyke Trailhead.