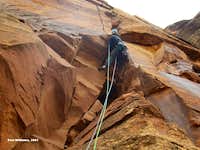 Twin Crack, 5.11a
Many of Zion National Park’s highpoints/mountains were given biblical names by the early Utah pioneers, Great White Throne not the exception obviously. However, it was not named by a Mormon, but rather a Methodist minister, Frederick Fisher. Rising 2500’+/- from the Zion Canyon floor makes the Great White Throne’s north facing cliff wall one of the tallest in the canyon. My introduction to the Great White Throne besides climbing directly across from it on Iron Messiah, was its base crack routes. However, the infamous routes on the Great White Throne are the north face routes, one of which is 25 pitches long on some incredibly suspect rock! 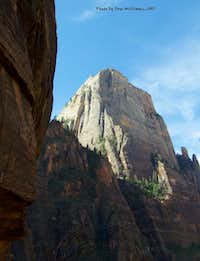 First ascentor of this tall sandstone wall? You guessed it, Fred Beckey (who I have actually met in Zion, but has also put up his share of Canadian Rcokies routes) along with Galen Rowell and Pat Callis in 1967. The upper section of the Great White Throne, which one could guess from the color, is one of the worse quality rock faces in Zion, thus the longer routes are not so popular. The lower base routes on the other hand are fairly bomber in comparison. However, in 2007, we were still cleaning them. Most of these “free” single or double pitch base routes actually face west which provides for quite the shade during the morning hours. These are free climbs, mostly put up by Jim Beyer and Bob Sullivan in the late 70’s or Dave Jones in the mid 90’s. All of these routes require layback or jamming up long sustained cracks. The Falcon Guide references that the descents can be tricky due to a lack of fixed anchors, but in 2007, we found bomber fixed anchors on the routes we did versus the tree rappels referenced in the book. This area is often closed during periods in the spring due to raptors' nests. 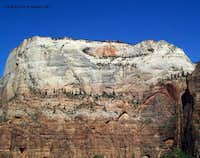 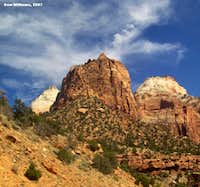 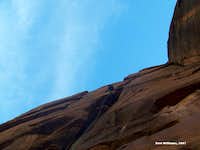 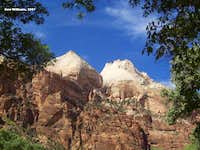 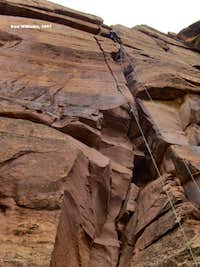 Rain, 5.9+
The first four routes can be accessed from the Grotto Picnic parking area, 3.3 miles from the bridge. A huge boulder centers the four routes, all of which are published in the Falcon Guide, “Rock Climbing Utah”.


Further north of the Grotto Picnic area just before the northwest corner of the Great White Throne (on both sides of a huge roof) are the next five routes to the northeast. If you are on the shuttle, ask the driver to drop you off at the “steps” going to the base of the Great White Throne. Follow some stone steps up from the road and follow a faint trail that angles left to below the roof.

Originally rated an old school 5.9, Illusion will work you even by 5.10 standards. This is a beautiful sustained line just to the left of the corner that forms the left side of the roof. Illusion consists of a single crack with a tough start past a loose chockstone. The crack starts to eat you up as it opens below a small roof move. Once you ascend this section, you move into a single fist sized crack that splits above. Take the left fork as it finally eases up towards the top. Move out left around loose blocks to a bolted station (2007). This pitch requires a double rope rappel which allows you to get a good look at the next route to the left, Twin Crack. (photos)

Ignore anyone who tells you this was ever a 5.9! even by old school standards. The roof move required to get up and into the sustained crack above is as tough a move as any required on the free single pitch crack routes in Zion. The wide right crack offers no assistance through this crux. Once you complete the crux move, you will continue on a sustained finger crack above. It is easy for your cams to become flared in this crack at the start. Another bolted station awaits you above and again, double ropes are needed for the rappel.

From Twin Crack, slip around the NW corner (left) of the Great White Throne for the next two routes.


The final three routes published in the 1998 Utah Falcon Guide are actually on the immense north wall of the Great White Throne. If beyond shuttle season, you can park at a climbers pull out on the right 3.9 miles from the bridge and hike straight up to the base of the climbs.


Rain, along with Box Elder Jam, Free Bird, Crack of REM and Nemesis (first recorded 5.11 in the park) were established by Jim Beyer and company in 1979. The two pitches on Rain, in my opinion, are every bit as good as the pitches on the Headache, just less clean obviously. Its close proximity to the road should lend to more moderate climbers getting on it if they knew about it. The first pitch is up an obvious cool corner with a fun roof squeeze/mantel, all well protected. A box elder tree splits the route. The second pitch reminds me of the upper two pitches on the Headache. It takes all the gear you have to place, with the most consistent pro at C4#3. On approach, the pitches look shorter than they really are. They are both right at a 100’ in length. The route stays shaded in the summer until mid-afternoon. Dow

From the bridge in Zion National Park, where you either continue to the east entrance or turn left down the canyon, either drive or park and take the shuttle (during restricted months) 3.3 miles to the Grotto parking area on the right hand side. Follow the before mentioned approaches depending on which routes you are after.

You do not need a climbing permit but you will have to pay a National Park fee to access the park. During tourist season, you will only be able to access the road by shuttle. I always purchase an annual pass to US and Canadian National Parks. If you are going to make more than four visits per year, I advise this option.

Springdale has tons of lodging options as well including a privately owned campground right before the entrance to Zion National Park. If you demand the luxuries of town, I recommend Majestic View Lodge. I have stayed here on several occasions and the rooms are first class with great views. There is also the privately run Zion Lodge which is in the heart of the park (and right across from Spearhead).