Along the Summit Ridge
Sunshine is a gentle bulk of a mountain that dominates a mild and easy ridge in between the Colorado 14ers, Handies Peak and American Basin to the south and Wetterhorn Peak, Matterhorn Creek to the northeast.
Sunshine lies 4.9 miles SW of Wetterhorn Peak and 6.8 miles NNW of Handies Peak.

This is a ranked 13er and falls on the Colorado high list at #375.
Sunshine Mountain doesn't see many visitors even though it is very apparent as one is driving up Henson Creek Road, more than likely en route to Matterhorn Creek or American Basin or to loop the road via Cinnamon Pass and Engineer Pass into Silverton & then back to Lake City.
Sunshine Mountain has an impressive 1,101ft. of prominance. It stands forth over Boulder Gulch to the south and over the North Fork of Henson Creek to the north. It is a difficult mountain to see from the N. Henson Creek Road due to the minor cliff bands and density of the surrounding forest.
Located within the confines of the Uncompahgre National Forest and just inside the Hinsdale county line, this is an easy mountain to scale that makes for an enjoyable day out on terrain that offers different views of familiar mountains.

For peak baggers, Sunshine Mountain is located in the massive Handies Peak quadrangle.
There are many mining prospects once past the footbridge at Mary Alice Creek and there is even a Jeep Road that winds its way up into the narrow ravine.

Line Parent: 13,540A
The view south towards American Basin. Looking to the north at the Uncompahgre skyline.
To access Sunshine Mountain, one's starting destination should realistically be the small San Juan town of Lake City. Lake City is roughly 54 miles south from Gunnison. Head west on CO.149 out of Gunnison to the Blue Mesa Reservoir. At the junction for Co.50, turn left (south), cross the bridge and proceed 45.5 miles south to the town of Lake City. The later part of this drive is exceedingly beautiful, especially in the autumn.
From downtown Lake City, follow 2nd avenue west for approximately two blocks. At the intersection of Bluff Street, turn left (south) and follow Hinsdale County Road 20 (also known as Henson Creek Road) up Henson Creek. This is a beautiful drive in its own right. The dirt road can be rough at times and a bit exposed as the canyon cuts deep to the south (left) but it is still passable for passenger cars to the trailhead for this mountain.
Continue to drive west passing the Nellie Creek Road (trailhead for Uncompahgre Peak) at roughly 5.3 miles.
After 9.2 miles, the turnoff (right side) for Matterhorn Creek will be your exit. There is an old ghost town at this fork called Capitol City but sadly, few buildings exist.
Drive up the rough but mild 4x4 road (Forest Service Road #870). The Matterhorn Creek Trailhead (10,400ft) should come after 11.3 miles or so. There is parking located here as are places to camp.
North Henson Creek Road continues to the left for an additional 2.2 miles to the roads terminus at a wide cul-de-sac. The elevation here is about 11,590ft, definately a high camp!
This is the end of your 4-wheel journey and the start of your two-foot trek. From here on out, all treking is off-piste. There are no regular trails leading anywhere into the upper basin or to the southern ridge. If you're lucky, you might come across elk trail or deer trail. Solitude will be a guaranteed companion on this leg of the journey.

The coordinates for the end of this road (useful in winter) are approximately: 38°00'36"N, -107°31'28"W
To give a better idea of where one wants to be in relation to the mountain and to bypass the vulgarities of the cliffbands earlier on,
use the following coordinates as a point of reference to achieve the upper plateau/basin: 38°00'03"N, -107°31'56"W 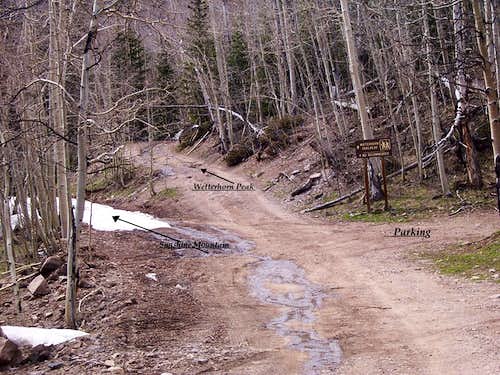 As with the seasons, summers are generally warm to hot in the day and cool down rapidly with the nightfall. Due to the highly convulated nature of the San Juan Mountains, weather can form on its own down here regardless of the area forecast.

Beware of the typical thunderstorms that form in the summer and fall and know that winters here can be brutal and cold. There are many passes that close regularily in the San Juans and Wolf Creek Ski Area routinely leads the skiing industry in snowfall.
Make sure your departure times are early enough to better guarantee your chances of a successful summit!

Since camping and weather often enough go hand-in-hand, remember as cold air sinks, this forces the warmer air up higher, usually trapping it in between the colder air near the bottom of the canyon and the colder air in the upper layers of the atmosphere. Since warmer air is lighter and thus less 'viscous', it stays sandwhiched in between. Not until the sun rises, warming the upper layers of the atmosphere is this pocket of warmer air actually able to move. Once this happens, updrafts are created. This ofcourse, simply adds to the fueling of summertime thunderstorms.
NOAA Website

Camping is NOT allowed along Henson Creek Road from Lake City to Capitol City (warning: VERY irritating music). Considering the amount of traffic that this dirt road sees in the warmer summer months, one probably isn't going to want to 'throw down' a tent anyway. There is a small camping area at the turn-off for Nellie Creek.

Once past the Matterhorn turnoff, there are ample places to camp and throw down a tent or two and past evidence of old fire rings can still be seen in places. As proper backcountry ethics go, it would be prudent and a good idea to use existing rings without adding needlessly to the terrain. The cul-de-sac at the end of N. Henson Road is wide enough to accomodate many vehicles and tents. Plus the degree of privacy is greater then down the road. There are no fees.

Just a short, eclectic list of some neighbourhood peaks/mountains