Brown’s Mountain is a summit in the northern part of Scottsdale, Arizona.  It is at the top of a very popular hiking and mountain biking area referred to as the Brown’s Ranch area; itself part of the McDowell Sonoran Preserve.

The summit features a prominent rock face, although reaching the summit is a rather simple task.  The summit can be reached in 45 minutes or less, leaving plenty of time to explore the area or get on with your day.  It makes an excellent morning hike or jog or mountain bike all year round. 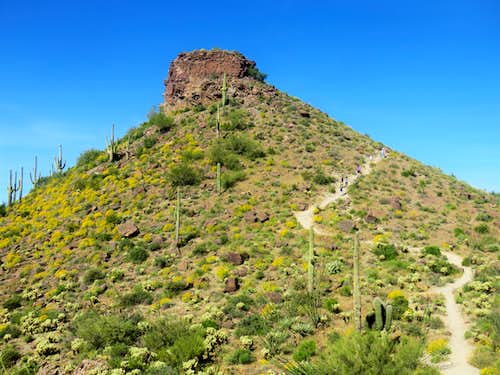 Final stretch to the summit from the north side

The summit sees a lot of hikers, but parking is plentiful.  It is recommended that people hike here between October and April.  It gets very hot during the late spring and summer months.

Despite not being very high altitude; this is definitely a nice area to visit.  The trailhead elevation is at 2,710’, so there isn’t much elevation gain required to reach the summit.


There are quite a few ways to reach the summit; all of which are well marked.  The shortest route is 1.6 miles one way, gaining about 550’.  Although you can do a loop going up the short route, and down the Upper Ranch trail.  That would be 4.4 miles total. 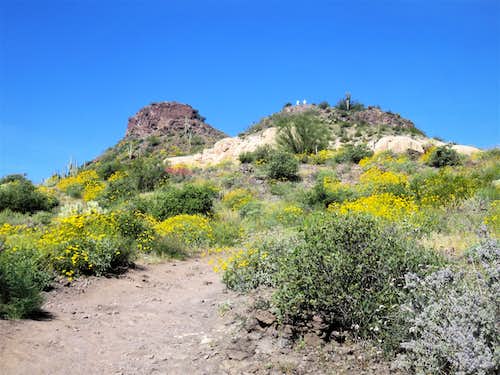 View from the main trail towards the summit block 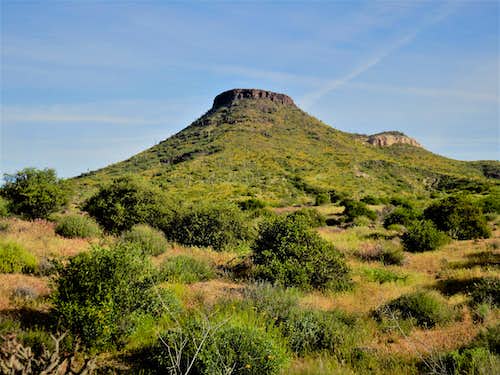 Whichever route that is chosen, it is well marked; noting the distance to the summit and the trailhead at every junction.

The trailhead is closed at night, with a gate blocking access.  Throughout the year, the times the trailhead opens and closes change based on when the sun comes up and goes down.  In the summer, it closes before sundown.  During January, it doesn’t open until 7am; and it closes as early as 5:20pm in the beginning of December.  Going off-trail, or bushwhacking is generally not allowed; although signs don’t indicate that everywhere.


Some people may venture off to nearby Cone Mountain 3,061’.  That mountain can be tagged along the way to Brown’s Mountain, if taking the Cone Mountain Trail and then the Upper Ranch Trail.  Technically, however, there is no maintained trail to Cone Peak, and per the rules of the Brown’s Ranch Trail system, hikers are not supposed to venture off trail. Cone Mountain is also a bushwhack; although if approaching from the north side, it isn’t too bad.  Use your best judgement. 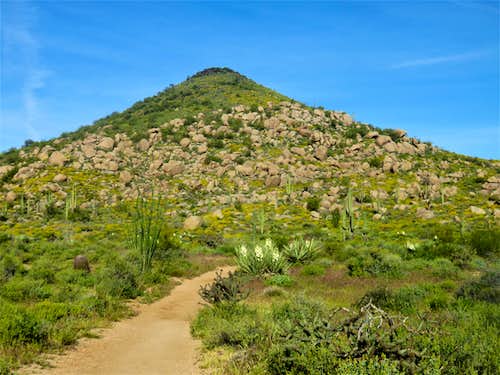