Barry Goldwater Peak is the highest summit in the White Tank Mountains, which rise west of the Phoenix valley, forming the western boundary of the "Valley of the Sun". It is an extremely popular hiking and picnicing and mountain biking area. It is not unusual for all parking lots in the White Tank Mountains Regional Park to be filled on a pleasant winter weekend afternoon. However, few people take the time to seek out the summit of the range, with most of the hikers content to stay on the lower network of trails and seek out the famous springs, waterfalls and tinajas (natural depressions - tanks - worn into the rocky drainages that hold water well into the summer).

The summit is a pointed peak that rises to an elevation of 4,083 feet, almost 3,000 feet over the deserts below it, and offers outstanding views. Its prominence of 2,500 feet places it at #38 on the Arizona list.  There is no route that is less than 12 miles round trip to reach the summit and back to the car.  This may explain why few people bother to attempt to reach the summit.

As viewed from the east (Phoenix side) from below, it is not obvious which peak is the summit, with Radio Summit 4,018' (featuring a large array of communications towers) appearing to be higher. The Park, administered by Maricopa County, does not include the summit, and discourages vistors from "visiting the towers". Without a good map, the true summit is indistinguishable from its nearby ridgepoints. Only upon closer views is it obvious that the pointed peak is higher. The true summit also features a few towers, but this should not discourage hikers from seeking it out, as the hike offers rewarding desert trekking and beautiful vistas for virtually the entire way up. There is much to do within the park and hikers are advised to check out the springs, waterfalls and tanks while in the area.

As noted above, the natural tanks are an attraction. The ancient Hohokam Indians eked out an existence in these canyons up until about 1100 A.D. and their presence is still evident by many petroglyphs and some check dams built to harness some of the spring water and rain run off.

Summers are extremely hot here, so the best times to hike in these hills would be November through April. 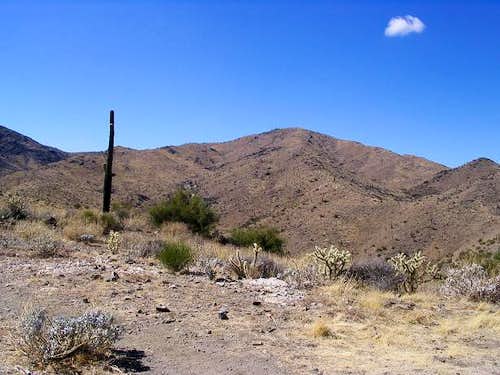 From Phoenix, travel west on Interstate-10 to the Loop-303 exits and access roads. Travel north on this throughway for about 6 miles to Olive Road. A sign pointing to the Park will be evident before the intersection. Turn left (west) onto Olive and travel about 5 miles through farms, new homes and desert to the entrance kiosk. Pay your entrance fee, and follow the main park road to one of two trailheads.

There are multiple options for a hike up to Barry Goldwater Peak.  There is Mesquite Canyon, Goat Camp, or the Mesquite Canyon to Goat Camp shuttle hike.  The second and third options offers an opportunity to hike the Radio Summit (Peak 4,018’).

For Goat Camp, drive a half mile past the entrance gate and turn left.

For Mesquite Canyon, take the road as it bends north through some foothills about a mile and turn left onto Waterfall Canyon Road. Shortly thereafter, turn left again at the first opportunity onto Ramada Way to a parking area and picnic ramadas at the Mesquite Canyon Trailhead.

From downtown Phoenix it is almost 35 miles of driving to the entrance gate. There are other possibilities to get here, depending on where you live, including the 101 Loop.

For Goat Camp, hike about 5 miles up to a trail junction.  At this point, go straight through a gully, which gains about 200’ in a third of a mile and then reaches a dirt road.  Take a right and continue up to Barry Goldwater Peak.  It’s about 6.5 miles to the summit gaining about 2,750’.  Alternatively, after three miles, there is a small trail heading up the face of Radio Summit.  The trail gains almost 900’ in a mile to the summit.  Once on top, head back down to the road, and continue on to Barry Goldwater Peak.  Return via the Goat Camp Trail, down the gully.  Bring good maps, but the route-finding isn’t too difficult.  Interestingly enough, going this route is about the same distance as taking Goat Camp there and back.  However, the elevation gain is about 3,500’.

For Mesquite Canyon, follow the trail for about 5 miles.  Follow signs as best you can, and avoid major turnoffs.  At this point, the trail turns south.  There is a use trail that heads up to the main road.  Bring good maps, to make sure you don’t miss this cut-off trail, because otherwise, it will add substantial distance and take you the opposite direction from the mountain.

One on the cut-off trail, it is pretty easy to follow.  You will reach the road in about ¾ of a mile.  Turn right and it is another ¾ of a mile to the summit.  The total distance is about 6 ½ miles one way, gaining about 2,600’.

Finally, you can shuttle, with a car at Mesquite Canyon, and another at Goat Camp.  It is recommended that you go up Radio Summit for this loop.  The loop is less than 13 miles.

The park is closed during the night and charges a $7 fee to enter per vehicle. It is open 6 a.m. to 8 p.m. Sun-Thur and until 10 p.m. Fri and Sat. The park literature discourage visitors from seeking out the towers. I suspect this is to absolve them of liability. No signs up high bar access to the top, however. Use your best judgment. 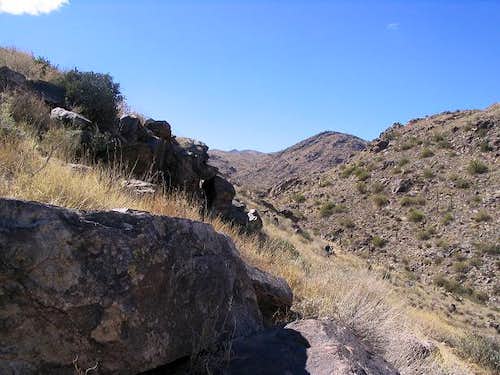 Camping is available, including amenities such as showers, etc. Reservations are recommended, and fees range from $10 per night up to $30 for groups (along with a per capita fee). See the above link for details. Bush-camping outside the park boundary is probably not a good idea. Too many farms and nearby suburbia. There are plenty of cheap hotels along I-10 in Avondale, Goodyear and Phoenix.

For basic groceries and gas, there are plenty of options along I-10 at Litchfield, Avondale and Dysart Roads, or east of the Loop-303 along any of the main intersecting roads such as Indian School, Bethany Home, Glendale and Northern. However, getting nearer to the park there aren't any immediately convenient minimarts. This will probably change in the coming years. Suburbia is creeping up quickly and in due time I am positive that all lands outside the park will be a sea of red-tiled homes.

The park has amenities for equestrians, including some trails especially set aside for the horse crowd. There is also a competitive track of routes especially set aside for the bicyclists. There are numerous ramadas and parking areas with tables and clean restrooms for picnickers. For those with little ones, there is a playground available. Don't be surprised to find every single parking space taken and hundreds of people out and about if the weather is nice. Even so, it's unlikely the trails will be overrun up high, and you will probably have the peak to yourself. Entries in the log date back to 1988 and work out to about maybe 20-30 visitors a year. For a peak so close to Phoenix this is a surprisingly low number.