Phoenix is said to have the best urban hiking in the nation. It is completely surrounded by mountains and has a small range running right through the city.
For the most part Phoenix is a very flat city with no rolling hills throughout the city. The low point is in the Gila Valley, which is about 900 feet. On the north side of the city on Deer Valley Road, the elevation is about 1,400 feet this gives the city about a 500 foot elevation gain in 30 miles. Many of the flat cities in the US have rolling hills and some sort of contours throughout the City. Not Phoenix, it’s just flat. Right in the center of this incredibly flat city rises the Phoenix Mountains. This range is a small range with most of the summits rising less then 1,000 feet. Only Camelback Mountain and Piestewa Peak has a predominance of more then 1,000 feet. Though these mountains are small, they provide wonderful vistas and excellent hiking opportunities. They have everything from easy class 1 hiking to scrambling to 5th class rock climbing. There are many rock climbing opportunities on Camelback mountain. Even Lookout Mountain has a small cliff face that can be climbed.
Phoenix is known by the people of Arizona as “The Valley of the Sun,” or simply, “The Valley,” since it sits in a very large valley with mountain ranges on all sides. These ranges add to the hiking available to Phoenix. As rugged and beautiful these mountains are, they also trap in the smog making Phoenix one of the smoggiest cities in the US.

Even though the hiking here is good, the mountains do have their obstacles, problems and difficulties. The first is the heat. The extreme heat in summer months can make hiking very unpleasant. The highs from June-September are typically above 110 degrees. Sometimes reaching 118. The lows rarely get below 85 degrees. Summer of 2003 Phoenix broke a record for the highest low they ever had. It only got down to 96 degrees and was already 100 degrees at 6:45am. Winter is usually the time most people go hiking since the highs are usually about 60-75 degrees.
The other obstacle is the flora. The landscape is covered with cacti, brush, bushes, yucca, and other painful things that can tear your legs apart. To protect your legs it’s advised to wear pants of some sort. The problem is that it’s too hot so shorts seem to be more logical. Either way it’s sort of a lose lose situation.

Here are all the main urban summits of the Phoenix Mountains within Phoenix itself (not including South Mountain).

I have included all the summits in these ranges that are currently on Summitpost.

The White Tank Mountains are on the far west side of the Valley, west of Peoria and Glendale. The summits of this range are mainly above 3,000 feet. 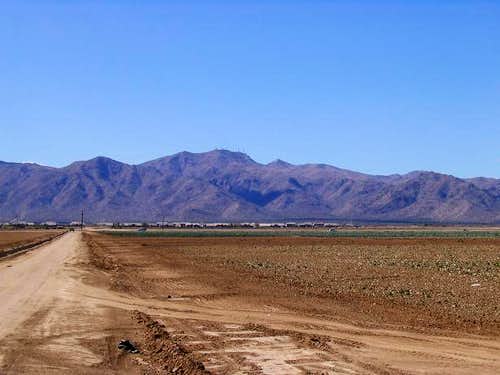 The Sierra Estrella dominates the skyline south of Phoenix. These mountains are often the backdrop of many postcards of downtown Phoenix. They have the most predominance over Phoenix than any of the other mountains. They sit at the base of the Gila river basin, which is the lowest point of Phoenix. They are the only range to have peaks that rise over 3,200 feet. 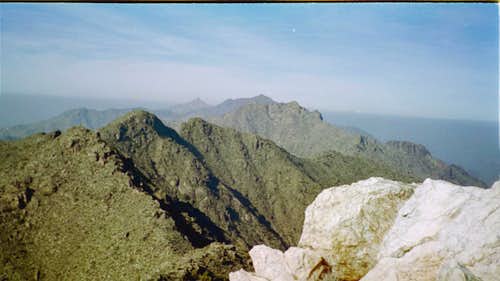 The South mountains are a very small range south of phoenix, and north of the Estella’s. This area is the largest park in Phoenix and is being surrounded by the city. The south mountains are not represented on Summitpost. The high point of this range is South Mountain at 2,690 feet.

These mountains are south of Chandler. The high point is at 3,104 feet.

These mountains are east of Apache Junction and form the far eastern edge of the Phoenix Metro. Since the Superstions are a very expansive range I have only included the sub-range The Superstition Ridgeline. This is the only part of this range that neighbor Phoenix Metro.
The view of these mountains from Mesa/Apache Junction are spectacular. They look like a large flank of cliffs that look impassible without ropes. Though they are easier then they look, they still are some of the most difficult summits to achieve in the Phoenix area. They are the only summits that surpass 5,000 feet. Superstition Peak is the highest point surrounding Phoenix, and requires a class 3 maneuver to get to the top of the peak. The unnamed summit on top of the Flatiron is the only summit around Phoenix that requires over 3,000 feet of elevation gain to acquire the summit. 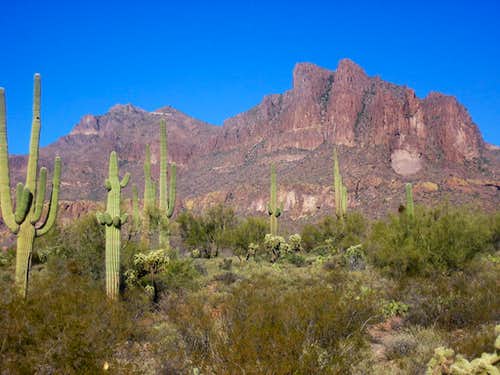 The Goldfield Mountains are a small jagged range north of Mesa and Apache Junction. These summits are mainly between 2,000-3,400 feet. I’m not sure what the high point is, but will post it as soon as I figure it out. 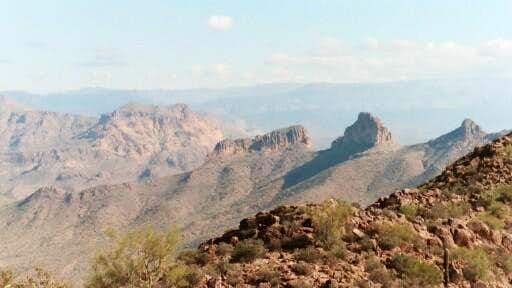 This small group of mountains are between the Goldfield Mountains and the McDowells, north of Mesa and east of Scottsdale. The high point is 2959 feet.

These Mountains form the eastern boundary for Scottsdale. On the other side of the mountains lies the city of Fountain Hills. The McDowells are nearly surrounded by the Phoenix Metro. These summits are typically between 3,900 –4,060 feet. This range generally runs north south. The high point East End sits on the northeast side of the range hidden from Phoenix. McDowell Peak looks like the highest Peak from the Phoenix metro. Most of the summits of this range is off trail and some even require a rock climb to achieve the summit. On the north end of the range lies Pinnacle Peak, which has a trail running around the perimeter of the mountain, but the peak requires a rock climb on solid rock. 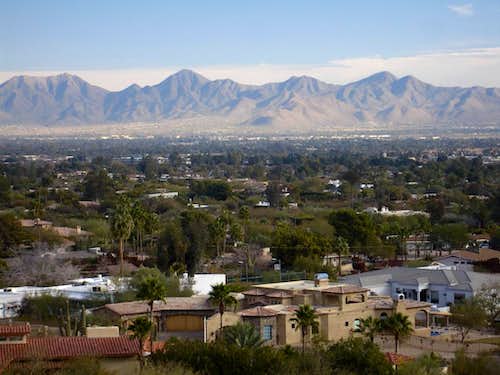