Goat Hill is the highest point of the western rib, also marked as Gila Range, of South Mountain which lies within the city limits of Phoenix. This peak is not far from Suppoa Peak, the highpoint of the South Mountain range which can be easily identified due to all the radio towers on top. The name "Goat Hill" seems to be unofficial as it can't be found on topographical maps, however it is marked with this name on the official South Mountain Park map. Based on topo maps the summit elevation is at least 2526 feet and can be as high as 2536 feet (10-foot closed contour) with a prominence of 526 feet. The summit provides very nice views onto the downtown Phoenix area as well as all the surrounding mountain ranges including Camelback Mountain, Piestewa Peak, the McDowell Mountains, the Sierra Estrellas, the Superstitions and Four Peaks.

Don't expect solitude on this hike as South Mountain Park is very popular among the locals and parking lots at the trailheads fill up fast on a nice weekend or holiday. The trails are also very popular among mountain bikers so it is advised to pay some attention. 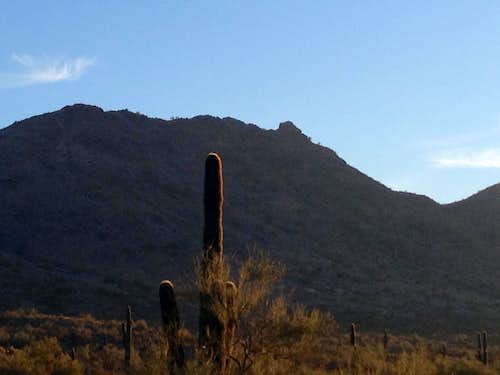 View at Goat Hill from the trailhead: the peak is the rock outcrop on the right side of the ridge.

In Phoenix drive south on Central Ave until you reach the park entrance which is marked clearly. From the entrance drive 1.3 miles, then turn left onto a side road and then immediately turn right into the parking area marked as "Five Table" by a sign at the road. The trailhead to the Ranger Trail is at the right side of the picnic area and clearly marked with a large sign and park map. The official address of the park entrance is: 10919 S.Central Ave., Phoenix, AZ 85042. The trailhead elevation is 1445 ft.

The route described below is the route I took on my hike though there are numerous other options on how to get to the peak. For other route options consult the South Mountain Park map. The hike as described here was about 4.5 miles round trip with a total elevation gain of 1100 feet and took me about 2 hours at a leisurely pace.

From the trailhead at the “Five Tables” picnic area, follow the clearly marked Ranger Trail which initially crosses a fairly flat part of classical Sonoran desert. After 0.8 miles the trail crosses the now closed Summit Road with only marginal elevation gain up to this point. The Ranger Trail now starts to switchback up the steep slope and after another 0.9 miles and 800 feet of elevation gain it ends at the National Trail. Now turn west (right) onto the National Trail; you cannot see the actual summit yet at this point but a sub summit is looming right above you. The trail contours around the left side of this sub peak and passes and old mine shaft after about a quarter of a mile. You can now see the summit of Goat Hill: 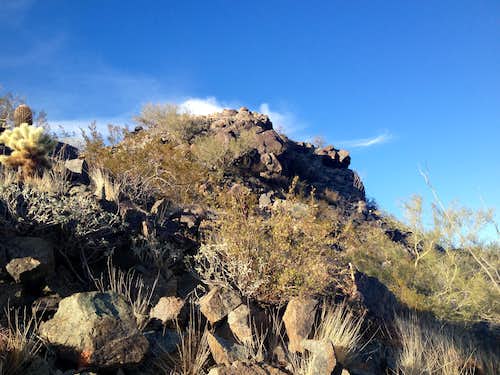 Summit of Goat Hill as seen from the National Trail

Follow the National Trail for another quarter of a mile until you come to an obvious use trail on your right side. This is the trail to the summit of Goat Hill which initially switchbacks up the slope and then goes straight up for the last 50 feet or so. 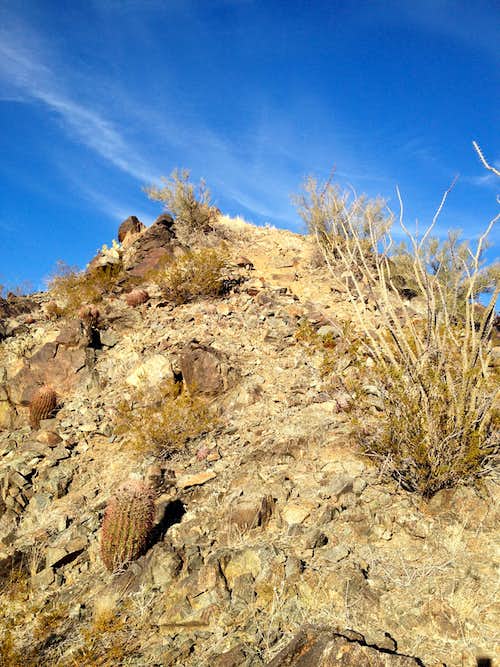 Last uphill part to the summit

The hike is within the City of Phoenix South Mountain Park so the park rules which are posted at the park entrance as well as all the trailheads apply. The park is open from 5am to 11pm and the entrance gates close at 7pm. Dogs are allowed but must be on a leash.

The best time to climb this peak would be November to March as you will generally encounter pleasant temperatures and blue skies. Summer gets very hot (>110F) though people still hike here but even with a very early morning start temperatures in summer can be in the high 80s to low 90s.

No camping is allowed within the park boundaries, however since the park is within the City of Phoenix limits there are countless lodging options for any budget nearby. 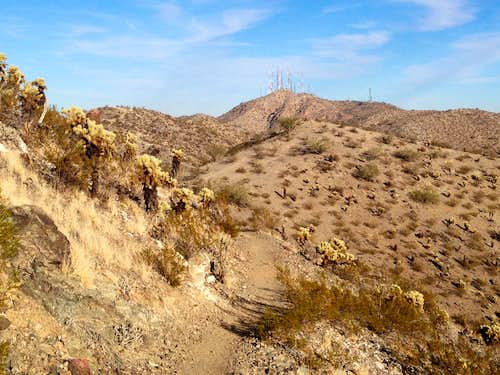 Suppoa Peak with the radio towers seen from the National Trail