In Slovenian language č, š and ž are pronounced like ch, sh, and zh. Our mountain is written Jerebičje. 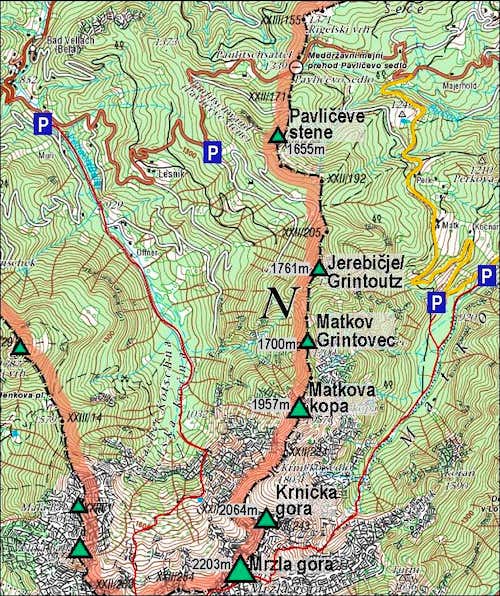 The map of Jerebičje and its neighbourhood 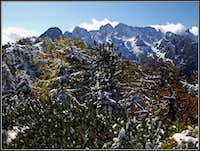 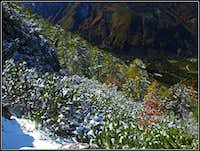 Jerebičje / Grüner Grintoutz is really an unimportant mountain. Normally, here on SP it would deserve a chapter on a page of a higher mountain, for example Matkova kopa. But the mountains in the northern ridge of Mrzla gora don't have any pages yet! So, in the future, it would be best to move this page under a parent mountain page, unless there will be times, when really every bump has its own page.

Being unimportant in a geographical and mountaineering sense, it doesn't mean that Jerebičje / Grintoutz is not a worthy goal. Can be times in a season, when it can be highly rewarding. The higher mountains towards the south are very rugged, remote and hardly accesible, so Jerebičje / Grintoutz is actually the only peak, lower than Mrzla gora, which is being regularly visited. And even this had not been allways so. Until the independence of Slovenia and joining European Union, this border mountain was visited only by locals. Now moving along the border is allowed and the summit is getting its popularity due to its broad panorama. We all suddenly realise, that Kamnik and Savinja Alps can also be viewed from a beautifu new standpoint.

The main mountain of this area is Mrzla gora, 2203 m. As said, it sends a strong ridge towards the north, ending on Pavličev vrh (saddle), 1339 m, which connects Belska Kočna (valley) on the west and Matkov kot (valley) on the east. Tightly attached to Mrzla gora is the summit of Krnička gora, 2064 m. Sharp, rocky, hardly accessible mountain. After it, the ridge lowers to the timber line, but the next summit, Matkova kopa, 1957 m, is no less hard accessible. Yet, there are abandoned shepherds and hunters paths which help towards it. The next one, Matkov Grintovec, 1700 m, is only a bump in the ridge and then already Jerebičje / Grintoutz comes. It stands between Lesnik saddle, 1518 m, on the north and Matko saddle, 1623 m, on the south.

The view towards the north is opened, so the panorama from the summit of Jerebičje/Grintoutz is broad, but not much different than from the other summits of Kamnik & Savinja Alps. Different is the view towards the south. There are the highest mountains of the massif, which we see from the different perspective. First, and most interesting, are the summits above Belska Kočna (valley). Then it's the north ridge of Mrzla gora itself - the ridge in which our summit stands. And finally there are the mountains above Matkov kot (valley) and Logarska dolina (valley). Also the view on the sunny terraces of Karavanke/Karawanken is very nice.

Even if mountain roads do reach Lesnikovo sedlo (saddle) from both sides, they are not allowed for public traffic. So we must start the ascent a bit lower, in either of the two valleys.

1. Above Lesnik farm. Driving from Bad Vellach and up from Bela/Vellach you firs pass the beautiful Lesnik farm. From there, you can enjoy one of the most beautiful views which Kamnik & Savinja Alps offer. On the altitude of 1350 m there's a big left curve of the road. Park there and start hiking up by the forrest road.

2. From Matk farm. It lies on a panoramic terrace above Matkov kot, some 1200 m high.

Even if the ascent from Matko saddle (so, from the south) is also possible, the most obvious approach is by the north ridge. Either from the east or from the west, you reach Lesnik saddle, 1518 m, by forrest roads. There, find the path which ascents towards Jerebičje / Grintoutz directly by the northern ridge. It is steep, but nowhere too dangerous, thus requiring only the usual careful step. Especially the last part goes also over rocks and through dense dwarf pines, so one would not expect to find on top such a beautiful view. Some 1 h 30 min from either side. You can do the ascent any time of a season, only in a very deep snow trudging might become too tedious.