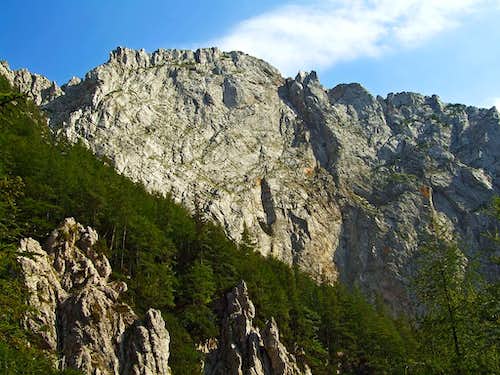 From a distance, mountains south of the main crest of Kamnik Alps look hilly and humble. Having relatively low altitudes, covered with meadows and pine-bushes they seem very unattractive for mountaineering. But yet, some of them are hiding big surprises. Rzenik is a typical example. Smooth slopes, covered with pine-bush on the S and SE side and one of the wildest abysses on the other, the northern side. When Tomaž Humar, one of the best Slovenian climbers was asked which was the mountain, which first drove fear in his bones, he answered: 'Rzenik'! The wall is some 450 m tall, quite broad, almost completely vertical and - crunchy! Yes, the quality of its rock is bad, but still, in this wall some of the most important climbs of modern Slovenian rock climbing were done. This wall is a milestone of someone's technical and psychical climbing maturity.

The mountain is rising on the ridge which on the NW side finishes the broader massif of Velika planina. Actually this broad, hilly plateau first lowers down to a dry valley of Dol, above which some 500 m high slopes rise to the summit of Rzenik. In the middle of this slope there's an alpine meadow, also called Rzenik. The NW slopes of the Rzenik ridge are falling down into Kamniška Bela valley, which is a tributary of the main valley, named Kamniška Bistrica. Similarly, but with no big rocky face, the NE slopes of the massif are falling down into Lučka Bela valley, being a tributary of Podvolovljek.

Towards the north, the massif of Velika Planina and Rzenik is connected with the main crest of Kamnik Alps with a narrow and rocky ridge, descending from the Konj (=Horse) mountain. Here the only marked path goes, connecting Velika planina with Presedljaj (pass), 1613 m and further with Dleskovška planota (plateau).

From the summit of Rzenik you have a nice view on the wreath of mountains around Kamniška Bistrica. Despite of its fine view and the special nature of the mountain, Rzenik is rarely visited. The ascent is easy, but the tiny path, which is cut through pine-bushes can be hardly found. So again, Rzenik is a mountain, popular with the best climbers, while Konj is the mountain which is crossed by caravans of ordinary mountaineers.

Velika planina. This broad plateau with many weekend huts and ski terrains was once one of our most beautiful alpine pastures. Its shepherds huts have an original architecture, which is now preserved in weekend huts. But that's of course not the same any more! Being turistically so developed several manifestations are held there, among them the most known the feast remembering ancient shepherds days. 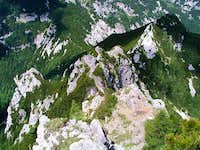 North ridge from the summit 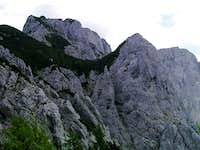 Konj is similar, but less impressive than Rzenik. Its N and NW walls are not so vertical, in many steps they are falling down to Kamniška Bela valley. Unlike Rzenik, Konj falls with steep, rocky walls also towards the east, to Lučka Bela valley. Its northern ridge is sharp, in several steps it lowers down to Presedljaj pass. The marked path follows this ridge and its W slopes. It is secured on several places with pegs and steel ropes and requires some experience and a solid step.

Here are just a few examples of summit panorama pictures. 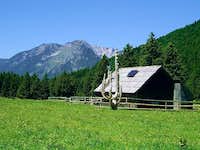 For the broader overview, see the Kamnik/Steiner Alps GROUP page!

There's only one suitable approach to Rzenik. You must come from the south, from Kamnik town into the valley of Kamniška Bistrica. There you either choose the cable-car to Velika planina and reach the mountain from there, or ascend through one of the two side valleys (Dolski graben, Kamniška Bela) and to the summit.

For the north wall climbs, the starting point is Kamniška Bela valley.

There's one more possibility! Dol alpine meadow, 1308 m can be obviously now reached also by car (but in the last part the road is closed for public traffic). A mountain road ascends there from Volovljek pass, on the eastern side of Velika planina massif. Volovljek pass connects Kamnik with Luče (in the valley of Savinja, via Podvolovljek valley). This is also a nice mountain bike tour. So, if you want to be friendly to the nature, leave your car on Volovljek pass, 1029 m, bike up to Dol meadow, 1308 m and hike up to Rzenik or Konj.

There are three routes to ascend Rzenik without harder climbing. Combining them, you will also recognize the popular crossing from Velika planina to Presedlaj pass.

1. From Velika planina. You can reach Velika planina by a cable-car. From the upper station, 1400 m, you cross the plateau in a NE and N direction to Planina Konjščica, 1505 m, descend to Planina Dol, 1308 m and continue northwards to Planina Rzenik, 1654 m and the summit. 2 h 30 min. Marked path till above Planina Rzenik. See the web page of Velika planina! On the page there's also a time-table of the cableway, which usually (in the season) departs from the valley of Kamniška Bistrica every full hour. One-way ticket is cca €5.

2. From Kamniška Bistrica valley. At the lower cable-car station, 553 m, a marked path goes towards the east into the valley, called Dolski graben. In many turns you reach some 600 m of altitude, pass the hunters hut and reach Planina Dol, 1308 m. From there to the summit. 3 h. From the same starting point (Kopišča, 553 m) one more path goes up to Dol alpine meadow. It is called Martinj steza (Martinj path) and is used mainly by hunters. It goes north of the usual marked path through Dolski graben and is much harder. Refer to the above mentioned 1:25000 map!

3. Through Kamniška Bela valley. Some 1500 m after the lower station of the cable-car you will see a cart-road deterring from the main road to the right. There's a beautiful Devils bridge! The marked path goes flat through the valley in the NE direction, then starts going steeper and steeper and in many turns you proceed through the valley of Kamniska Bela (the right part). The path goes just below the impressive north wall of Rzenik. By a nice belvedere (a bench) you have the best view on the wall, afterwards you pass a few ravines and in many turns reach the Presedljaj (saddle), 1613 m.

On the saddle you turn sharp right (left you continue to Korošica). A secured, marked path overcomes the upper 200 meters of the mountain Konj. From the summit of Konj you must descend some 50 meters towards Rzenik alpine meadow, where the trail to the summit of Rzenik deters towards right. From Kamniška Bistrica 3 h 30 min. How to ascend the very summit of Rzenik, see this route description.

Unfortunately, not being a climber myself, I have no detailed information of these climbs. Here's only a short list, fellow SP'ers, please help!

On Rzenik there are no limitations for the ascent.

Rzenik can be ascended virtually any time of the year. In summer, when the cableway to Velika planina operates, the ascent is not hard, outside of the main season it can take longer. In winter, if enough snow, Rzenik is also recommended as a ski tour. After skiing down to Dol alpine meadow, you can return to Velika planina or ski down directly to Kamniska Bistrica through Dolski graben. In summer, seeing all those pine-bushes, you can hardly imagine that it may also be possible to ski down there.