Storzic
The Alps of Kamnik and Savinja, Slovenia, Europe

The Alps of Kamnik and Savinja, Slovenia, Europe 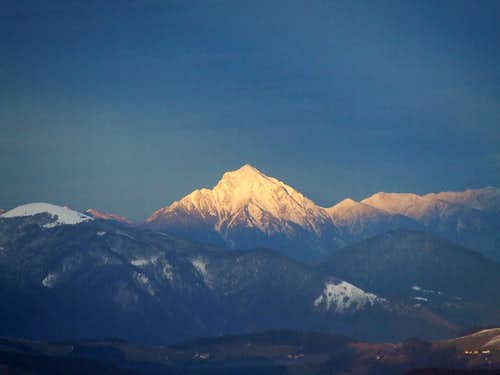 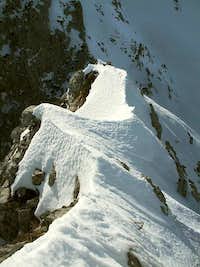 General remark: (When reading Slovenian words on maps or in books, you will find special characters for ch, sh, and zh. They are written with c, s and z with a caron - little v above them.). Storžič is pronounced Storzhich.

The old name, which was widely used until recently, was Storžec.

Storžič is the highest mountain in it's small group, otherwise being part of the Kamniške in Savinjske Alpe. From all Sides Storžič can be seen as an impressive, high pyramid, with a strong N and W ridge and less strong E and SW ridge. The peak can be reached by many routes, but in any case you should consider doing more than 1000 meters of altitude. Many routes are mountain paths where you should only take care of a secure step, some routes are artificially secured and need some climbing expertise, over the north wall also a few true climbing routes lead (in the range of UIAA III. and IV. degree). In good conditions you can also descend from the very summit with skis (a great experience, but also there is a considerable risk of avalanches), there are also a few possibilities for extreme skiing over the northern and eastern slopes.

A Bit of Geography

Seen from the south, Storžič shows a strong western ridge and a shorter and steeper eastern ridge. The western ridge starts on Velika Poljana alpine meadow. It rises first steeply, that part of the ridge is called Psica, then on some 1800 m it has a flat shoulder and then the ridge rises steeply again towards the summit. The eastern ridge lowers directly on Bašeljsko sedlo. From the summit another short ridge lowers towards the southwest. On its bottom part there is a nice rounded hill, hosting the cute St. Lovrenc church. Between the W ridge and the SW ridge there is a broad ravine, called Javorniški žleb. In the middle of it, there is an alpine meadow Javorniška planina with a private hut. From Bašeljsko sedlo towards the south, another steep, wild ravine goes. That's the ravine of Belica creek - the water source is quite low. 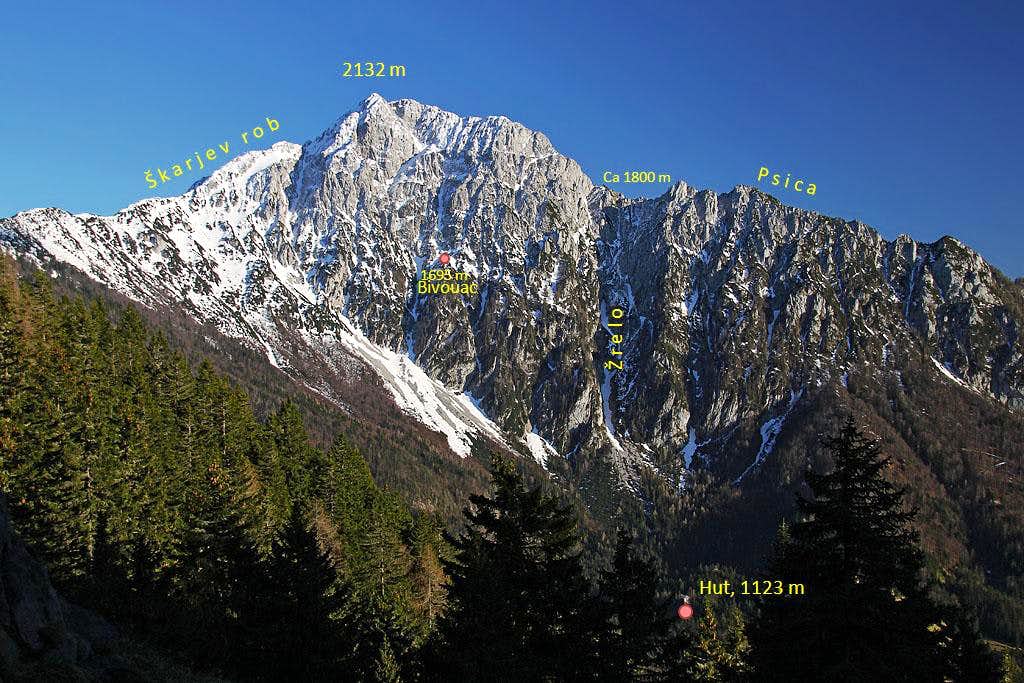 Storžič from the north and some of its most characteristic features 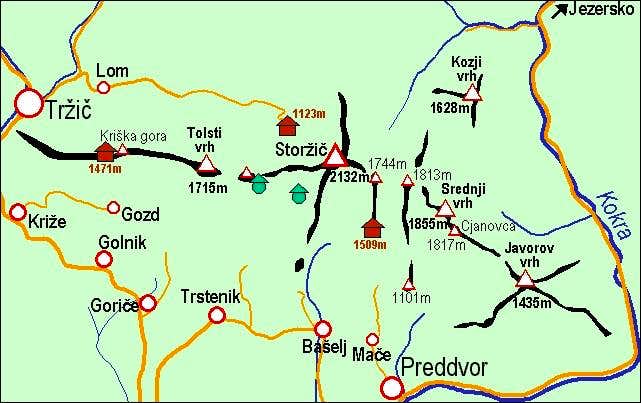 A self-made map of Storzic and its small subgroup

Towards the north, Storžič has a steep, high, rocky face. The western ridge - Psica - we know already, on the other side the North face is bordered by the long, strong northern ridge. It is called Škarjev rob and goes towards the nearby Veliki Javornik (Ženiklovec) summit. In the North face there are many distinct ravines. The big ravine west of the summit (and east of Psica north face) is called Žrelo. And then towards the east there are more of them. The most popular is Peto žrelo (the Fifth Ravine), where climbers (and even experienced skiers) descend.

East and west of Storžič there are some more mountains, actually two small groups, which are not so important. Although the focus of this page will stay on Storžič, I would like to encourage you to visit also the other two pages: of Tolsti vrh and Srednji vrh area. They were long time part of this page, now I created separate ones.

There's one more thing worth mentioning here. The whole southern side of these mountains is devastated by forest tracks which were excessively built in the recent years. After winter frost ruined a big percentage of forests they cleaned fallen trees, but that resulted in ugly landscape of almost all slopes up to the altitude of some 1200 m.

The upper part of the main crest from Storžič towards the west (Tolsti vrh, Kriška gora) is made of younger (ca 230 million years old), massive Triassic limestone from the Carnian era. The line, connecting the valleys of Reka (on the north) and Belica creek (on the south), just east of the summit of Storžič, represents the border to the area, made of somewhat older (ca 245 million years old) Triassic limestone and partially dolomitic rocks from the Anisian era. These rocks are forming the massif of Srednji vrh - towards the valley of Kokra river. As said, north of the massif of Storžič, the geological (and also geographical) border to Karawanks mountains lies on Javorniško sedlo (saddle). The lower parts of Storžič massif are on the surface covered by slope screes, partially cemented into breccia and by glacial deposits.

Views more from the distance

St. Lovrenc hill today hosts only this cute church, but on it and on nearby Gradišče in antiquity there were fortified settlements.

On the southern slopes of Storžič, above the valley of Belca creek, there is a steep, rocky 873 m high hill, on which in the times of antiquity there was a fortified settlement - castellum. It was inhabited from prehistoric times, but got its importance in the times after collapse of Ancient Roman empire. Those were very unsecure times. In the valleys, where land was most fertile, romanised people lived, towards the end of empire they adopted christianity. But barbaric Germanic and Slavic people started to invade the empire from all sides. To avoid effects of their raids, locals started to build fortified settlements on higher, hardly accessible hills. Like Ajdna nad Potoki, also Gradišče nad Bašljem was a settlement of that type. On the nearby Lovrenc hill, there was found also a quite big settlement from Hallstatt era and late antiquity and one hypothesis says that Gradišče was a part of its defense system. But this is note very likely, because its hill is more towards the end of Belca creek valley. Details about how the late Roman settlement was abandoned, are not known. But traces of fire indicate that its end was violent, as it was the case of Ajdna too. 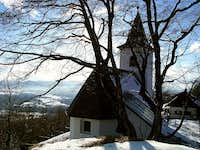 Some two centuries later, from the end of 8th century to 10th century, Gradišče was inhabited again. From that era, archeological artefacts are very numerous and precious. They indicate that in addition to the ordinary dwelling role, the place had also a very important military function. Richly decorated quality items of military equipment and equine and cavalry gear are showing strong Carolingian influence. In this stronghold, and many similar others, very likely local Slavic noblemen organised military centers of power to resist Franks, who ultimately prevailed in the area. Yet Gradišče continued to be inhabited and appears in written documents from the middle of 12th century. The third place which revealed a considerable archeologic evidence from the times of Antique, is the site of St. Jacob church above Potoče village. There was also a settlement, controlling the trade path which went along the Kokra river. That was an important trade route from Kranj, which was at that time a well established town, towards the north in Noricum. A nice article about gradišče, St. Lawrence hill, Ajdna and St. Jacob can be found here. 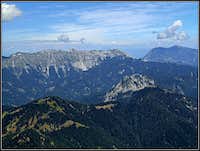 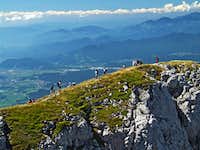 Storžič is an exceptional lookout mountain. Due to its isolated position above Gorenjska plane, from its summit we have a specially nice view towards the south. In a very clear day you might be lucky to see even the Adriatic see, shining on the horizon. As Storžič's altitude exceds its neighbours, the view from its top is opened also far towards the southeast, west and north. We clearly see giants like Grossglockner and Hochalmspitze. In comparison with them the Julian Alps with Triglav are already quite close. And very nice is also the view on the neighbouring Kamnik and Savinja Alps, especially on the summit of Kočna, just across the valley of Kokra.

The summary of hiking and scrambling routes, graded by hiking standards. If you know more routes, please let us know. 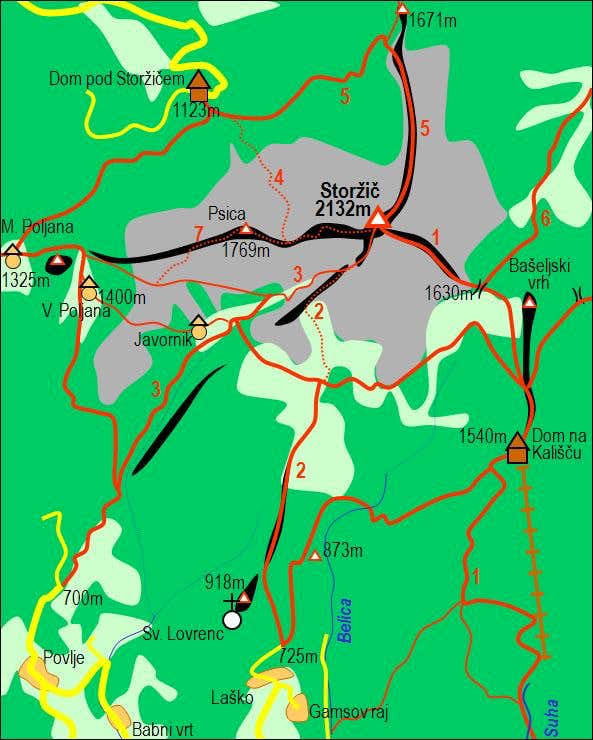 Storzic and its main routes. Their numbers refer to those in the text. Click on the image to get a high resolution map with many more details!

1. Mače (550 m) - Dom na Kališču (1540 m) - Storžič. A short video - here. Good marked path to the hut and on to Mačensko sedlo (1615 m), the upper part a bit more demanding. The whole ascent: cca 1600 m, 4,5 h. Dom na Kališču can be reached also from Bašelj, Gamsov raj or from Laško through the Belica valley. Otherwise Belica creek forms an abandoned ravine, called Bašeljska grapa, which is hardly passable. It brings you to Bašeljski preval, but the ascent is time consuming.

On the above approaches only ascent times are mentioned. Have in mind that you also need to come down - another approximate 3 hours. You can combine these 7 approaches to climb up by one and descend by the other one. For example: 4 and 5, 2 and 3 or any othe combination, depending on where you have the car. There are many other possibilities to climb the summit from more distant starting points (and mountain huts).

All right, in the above chapter the 7 major routes are listed and on subpages they are described. But in this chapter I want to give you some handouts - useful route descriptions which you can print on A5 and take with you. Or upload them on your mobile device.

All routes are in the north wall of Storžič. The trailhead is Dom pod Storžičem (hut), 1123 m. 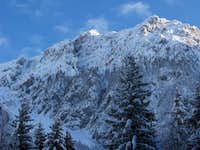 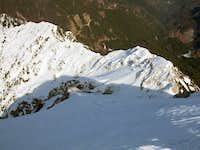 East And West Of Storzic

In Storžič group there are some more nice, but lower mountains east and west of the main summit. Two SummitPost pages describe them: Srednji vrh group page - describes the small group of summits east of Storžič. Tolsti vrh mountain page describes the ridge west of Storžič, the one of Tolsti vrh and Kriška gora.

The mountain base can be reached from 3 main directions:

1) Southern approach. By the main road Kranj - Jezersko (Austrian border) to Preddvor. There you can choose (if you are with your own car) one of several villages as a starting point: Povlje, Bašelj, Mače.

2) Northern approaches. By the main road Kranj - Ljubelj (Loiblpass, Austrian border) to the town Tržič. If you have a car you can drive from Tržič into the Lom valley to Dom pod Storžičem (the hut below Storžič), 1123 m.

3) Eastern approach. By the main road Kranj - Jezersko (Austrian border) to Kanonir and there into the Reka valley. 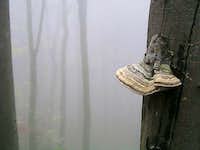 There are no limitations to climb the summit besides those in yourselves. But take care of nature and consider other people. 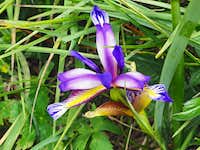 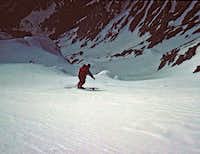 Skiing from the summit 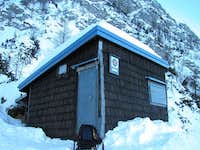 In Preddvor there is a decent hotel (Bor), also Jezersko is a well known tourist resort. Two huts are enough to cover this mountain, there are no camping places close by, but anyhow the ascent is a one-day event. If you are travelling around these mountains you can be sure that sleeping in wilderness is very safe here. There are no dangerous wild animals and also people are friendly. But take care of nature! In the group, there are a few official huts of Slovenian Mountaineering organization and a few private huts:

A More Remote History of This Page