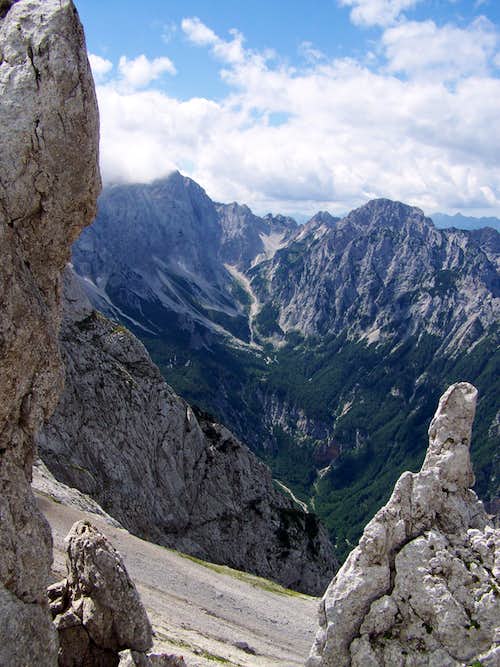 Characteristic landscape of Lučka Baba
Planjava and Ojstrica are two well-known peaks in the Kamnik-Savinja Alps. These two peaks are in 2 km distance from each other, and they are connected witgh a rugged ridge. The lowest point of this ridge is the saddle called Škarje (2141 m). The rugged ridge stretching from Škarje to western direction is culminating at its end in the eastern peak of Planjava. But it has some highpoints between Škarje and Planjava. The first summit next to Škarje has an elevation of 2244 m. The next culmination west to it is a double summit with highest point of 2335 m. Most sources say that the summit with 2244 m elevation is called Lučka Baba (Brana), but I also found a source where the higher summit with 2335 m elevation was indicated as Lučka Baba. I have doubts about the correct identification of the exact peak of Lučka Baba, but for me it's still more logical to say that Lučka Baba is 2335 m high and not 2244 m high. If anybody can give confirmed (academic) answer on this question, then I will update this page.

And now about the name of the peak: it is called as Lučka Baba or as Lučka Brana. Lučka is an adverb of place, indicating that the peak is near the village Luče. It's an important character of the peak, because there are other peaks in Slovenia called Baba and Brana. Anyway, Baba means old women.

As I already mentioned, Lučka Baba is a highpoint of the rugged rudge between Planjava and Ojstrica. This ridge has nearly vertical wall on its northern side, above the valley called Logarska dolina. The view down to the valley is one of the attractions of this ridge. This north face is also attractive for some climbers: the 650 m long climbing route called Recesija (Recess) with difficulty V,4+.

The slopes south to the ridge are more moderate than the north face, but they are still steep. The marked route is always stretching on the southern side along the ridge. The peaks of Lučka Baba can be ascended from this route without difficulty. No visible routes help you to go up but you must find your way on the rocky surface.

This rocky surface is white as the mountain is built of 250 million years old limestone. There are no trees on the mountain. Mostly rocks, and some grassy areas with Alpine flora.


Wiew from the peak 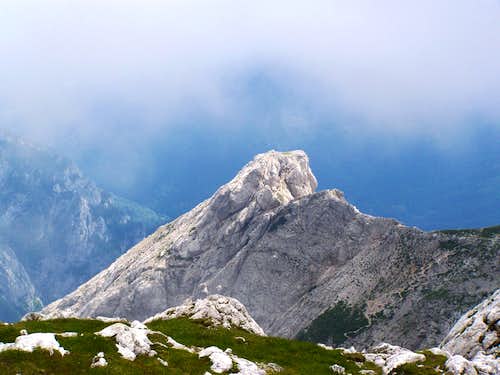 View from Baba on Najvišji rob 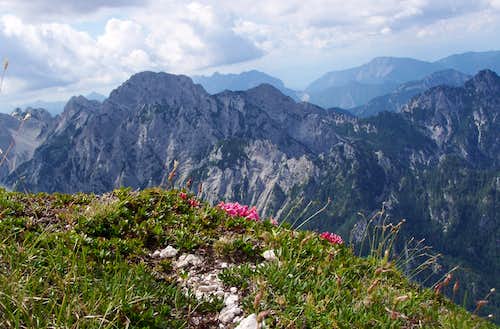 View from Lučka Baba on Mrzla Gora
Lučka Baba can be accessed from the marked route connecting saddle Škarje and the east summit of Planjava. This route technically is not difficult. The most difficult part is on the hillside of Planjava. This section is secured by fixed steel ropes. In the Austrian via ferrata rating it must be the easiest (A) category.

So you can approach Lučka Baba basiaclly from 4 directions:
- from Planjava summit
- from Ojstrica summit via Škarje
- from Logarska dolina (via Škarje)
- from Kocbekov dom via Škarje.

Whatever option you select, it will be a long hike with at least 1450-1500 meter cumulated elevation gain (and loss). 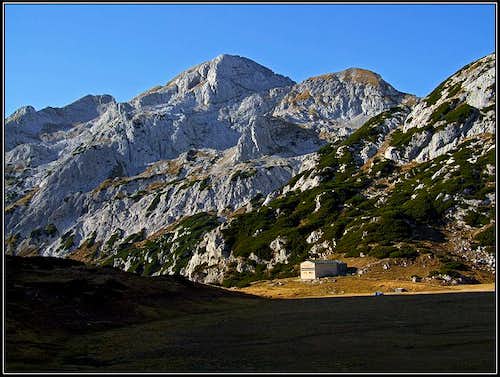 I don't know how much it is permitted, but I always do wild-camping here in the Kamnik-Savinja Alps, in „hidden corners”.