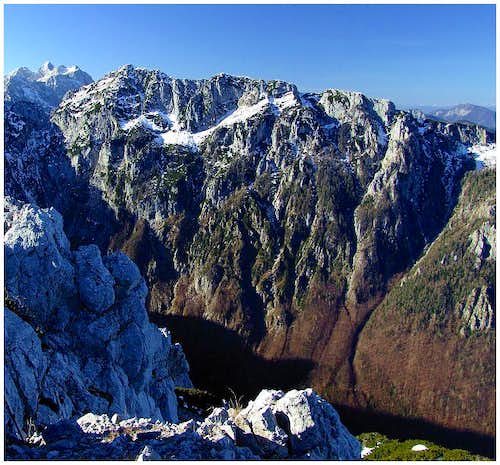 The mountain name is pronounced Krofichka, in some sources the name is also written as Grofička.

When the main ridge of Kamnik Alps comes from the West to Ojstrica summit, it branches on two ridges, between which the beautiful Robanov kot (valley) lies. In the NE ridge the first summit beyond Škrbina notch, 1800 m, is Krofička. It is a nice, sharp mountain, not very often ascended. The ridge is continuing towards the NE over some sharp summits, called Ute, 2029 m, 1995 m, and then lowers significantly to the summit of Strelovec, 1763 m, which is the last summit, important for mountaineering. All further summits towards Savinja valley are covered with forrests and in a mountaineering sense less important.

On the SE side of Krofička range Robanov kot (valley) lies, on the NW side Logarska dolina (valley) lies. In the past the summit of Grofička was more connected with Roban and his farm. For centuries shepherds of this 'mountain king' were using the sunny slopes of this mountain and also maintaining below Ute a small hut (that's what the name Ute means in plural). But also this side of the mountain is steep and rocky, so no wonder that one story is telling of a hunter (named Krofič, after him the mountain supposedly has its name), who got on a narrow ledge to a dead end, unable to go forward and to return back as well. He cried for help and people came below his ledge advising him to throw the gun and so test if he can jump down. The gun crashed, but people said it was in one piece, so the man jumped, killing himself, of course.

Today almost all visitors of Krofička summit ascend from the northern side, where above Logarska dolina a well maintained hut stands - Koča pod Ojstrico is serving mountaineers who ascend Krofička and Ojstrica from the north. The ascent goes by a steep path, which below the summit of Krofička overcomes many rocky steps and is also protected by steel pegs and ropes. Even if there are some steep rocky walls, Krofička is not known as a mountain for hard climbers. 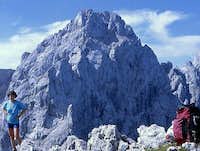 The view from Krofička's summit is very fine in all directions, but all eyes are of course turned into the north wall of Ojstrica, standing so close. 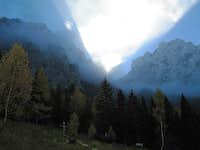 From the N ascent

From the N ascent

1. Normal ascent. From Koča pod Ojstrico (hut), 1208 m, the path goes first towards the NE and then turns towards the S. The final section is very steep, rocky and protected by steel ropes and pegs. From the hut 2 h 15 min, from the valley 3 h 15 min.

2. From Škrbina notch. From Koča pod Ojstrico (hut), 1208 m, we follow the marked path, which goes over Škrbina notch on Ojstrica (Kopinšek route). The notch can be reached (no path!) also from Robanov kot (valley). On the notch, 1800 m we turn left and climb over a rocky ridge (UIAA II), until reaching the S slopes of Krofička. Over a steep terrain and the rocky summit ridge to the highest point. From the hut 2 h 30 min, not marked, easy climb.

On the ridge towards Ute

3. Over the summit of Ute. The N ridge of Ute (Movznik) can be reached by the path, which goes from Koča pod Ojstrico (hut), 1208 m, to Strelovec summit. Here we turn sharp right (towards the SW). The route is hard to follow. In some places we still find shepherds paths, over the main ridge we need to climb (UIAA II). Very rarely used approach, difficult orientation.

4. Directly from Roban meadow. On Roban meadow, some 60 minutes from the parking place by the farm, you can go right and directly up the slope of Krofička. This is the old shepherds path, which brings you in some 2 h 30 min on the high grassy slopes, where shepherds once kept their herds. From these meadows to the top you have then one more hour of scramble. Altogether a very demanding orientation, the start of the shepherds path is much above the valley, not on Roban's meadow!

There are no limitations to climb the mountain. The mountain is in the middle of a parc area. For the road into Logarska dolina you must pay toll (for a car some 5€). 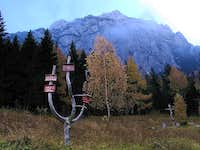 There are two mountain huts - one in Logarska dolina (valley), the other one above it (1 h walk):

On Roban's farm you can also stay as it is a tourist farm. In Logarska dolina there are also some hotel capacities.