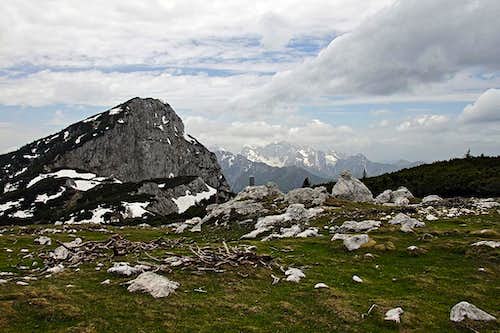 On the summit of Lanež
Lanež is a less known summit in the eastern part of Kamnik and Savinja Alps. Only in the recent years it became more popular as climbers discovered its ravines, which in spring offer nice, short base climbs. From the southern side it is easily reachable, while direct ascents over its NW and N face require some easy climbing.

The prominence of Lanež is only some 35 meters. If we look at a bigger picture of Raduha subgroup, where it belongs to, we see that it is more a shoulder in the massif of Raduha. This one reaches its highest point in Velika Raduha (2062 m), lowers a bit on Mala Raduha (2029 m), then more down to Durce notch (the lowest point is just below 1900 m), and the next summit is already Lanež, 1925 m. Beyond it, the main ridge continues towards the NE, on Jelovec, 1808 m, and then finally lowers on the saddle above Planina (meadow) Vodol, some 1470 m. There the limestone nature of mountains slowly ends, as the next sumit (Travnik) and the ridge of Smrekovec are much different - their origin is volcanic.

Towards the NE and N Lanež is still sending steep, limestone walls, but they are only some 200 m high. The southern and eastern side is carstic, mostly densely overgrown with dwarf pines. The terrain there is very rugged and hardly passable. But from Durce notch (from the SW) and by the NE ridge the summit of Lanež is easily reachable. There also both marked paths come up.

Further towards S and SE there are nice alpine meadows - around Koča (hut) na Loki and Javorje alpine meadow. As the terrain is mostly opened, Lanež is in winter and early spring also a nice goal of a ski tour.

From the summit of Lanež you can enjoy a few specific views. Nice is the scene of Raduha (actually you see only Mala Raduha), with Kamnik and Savinja Alps behind. The rest of panorama is similar to that one of Raduha. Interesting are the views on the eastern part of Karavanke range (with Olševa, Peca and Uršlja gora), towards the south are the hills of central Slovenia.

Mountain road towards Raduha
The easiest ascents come on top from the south and east. Those trailheads are on the same mountain road. It comes up from the valley of Savinja. In Črna, between Solčava and Luče, you deter from the main road northwards. Driving by the valley of Dupljenik creek, you gain a lot of altitude and finally reach Vodol alpine meadow, 1300 m. There is the trailhead for the eastern approach. If you continue driving up by the road, it turns sharply towards the south-west, it brings you below Koča na Loki. There is a parking place on some 1420 m.

The northern trailhead is Bukovnik farm, below Koča (hut) na Grohatu. You either drive up from Solčava on panoramic road below Olševa and then towards the east on Sleme pass, where you turn south towards the farm, or you reach there from Črna town on Slovenska Koroška region (from the NE). Bukovnik farm lies on the altitude of 1327 m, we can park a bit above it. 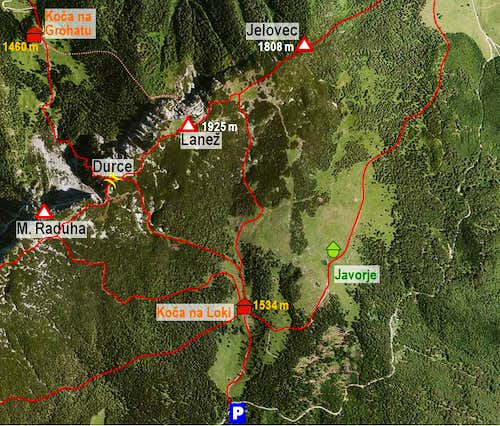 On the summit of Lanež

Lanež from above Durce pass
1. Planina Loka - Lanež (čez Durce). 1 h 20 min. This is the easiest and most obvious route on Lanež. Durce notch is the key point on the cummit ridge of Raduha. Over it, ascents on Raduha go from the northern and from the southern side. So many people ascend Lanež as the side goal, when ascending on Raduha. From the parking place, 1420 m, we go to Koča na Loki and continue by a grassy valley towards the north. The two paths on Raduha soon branch apart, we go by the right one, which soon after the crossroads turns towards the north-west, reaches the karstic terrain below Durce notch and then the notch itself. Just before the notch we turn by another marked path right, detour the hill of Durce summit and then ascend by open terrain in the NE direction the summit of Lanež. Easy, marked path, difficulty T1.

On the main ridge, NE of the summit of Lanež
2. Planina Loka - Lanež (East route). 1 h 20 min. On this route you will only rarely meet anybody. It can be nicely combined with the route #1. You can start the tour on the parking place below Koča na Loki, 1420 m, or anywhere else east on the approach road. Nice are for example the paths over Javorje alpine meadow, NE of Koča na Loki. From Koča na Loki you continue northwards, but keep right, towards the grassy ridge which ascend on the summit of Jelovec. You need to reach the top of pastures, where the marked path crosses the fence. That place can be also reached from Javorje meadow by a pathless terrain, mostly meadows. Beyond the fence a nice marked path leads us horizontally into the valley between Lanež on the left and Jelovec on the right. The path keeps to the left slopes, the ones of Lanež. Gently ascending you pass the summit of Lanež (from this side densely overgrown) and gain the main ridge. There is a broad plateau, from which you can also easily ascend Jelovec on the right (towards the NE). For Lanež you turn sharply left. The marked path ascends the slopes and soon brings you on the NE ridge. That one is already rocky and a bit steeper. The path is however all the time easy, perhaps a passage or two could be rated with T3 difficulty.

From the eastern side a marked path reaches the summit of Jelovec also from the meadow of Kosmačeve Rastke and Vodol alpine meadow.

3. Bukovnik - Lanež. 2 h. From the north you go first by a nice, marked path to Koča na Grohotu (hut), 1460 m, and from there further towards the south on Durce notch. From the end of alpine meadow the path ascends a bit steeper and soon we are on a crossroads. The left path goes on Durce. It soon reaches the sands below Mala Raduha. The new path now enters the left slopes. They are rugged and steep, but the path is good and well beaten. From Durce we continue as described at route #1. A few passages of T3 difficulty.

4. Hojnik route. This is a difficult hike up, in the summit ravine it requires some easy climbing of UIAA I degree. The path below is not marked. Due to friable rock helmet is very recommended. The approach comes directly on the summit of Lanež from the north. So we first hike from Bukovnik to Koča na Grohotu and from there go in the SE direction to the edge of forrest. On a tree we must find a sign where the path starts. There we go over the fence and continue by the trail which goes left upwards. The path can be easily followed till a small saddle on some 1600 m. There we turn right and continue by a much weaker path till the walls of Lanež. There the path continues in turns over steep slopes and brings us into the ravine. There the hardest part starts. The ravine is filled with rubble and some passages are quite a demanding hike up. Where the route climbs over the rocks, we may find a few old pegs. After we exit the ravine, we continue over steep grassy slopes to the top. 2 h.

The following list of climbs is taken from the Plezanje.net site.

As I don't have my own pictures, here are the links on two from Plezanje.net:

Lanež can be ascended any time of a season. If coming in winter from the south, have skis or snow shoes. In spring and when conditions are good in winter, the northern ravineas are attractive.

On the southern side there is also Planina Javorje, 1594 m, a nice alpine meadow with a hut.