Grintovec
The Alps of Kamnik and Savinja, Slovenia, Europe

The Alps of Kamnik and Savinja, Slovenia, Europe 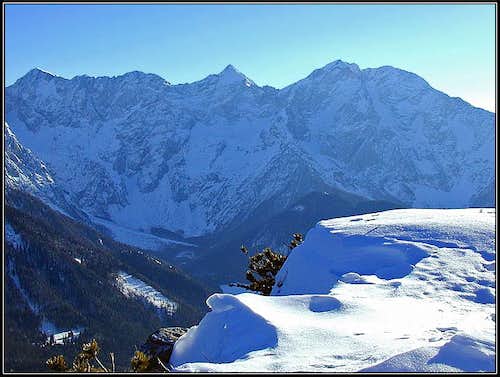 Northern walls - Grintovec is the sharp peak in the middle. 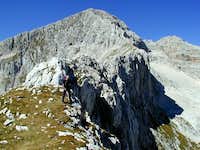 General remark: (When reading Slovenian words on maps or in books, you will find special characters for ch, sh, and zh. They are written with c, s and z with a caron - little v above them - like č, š and ž..)

Grintovec is the highest peak of Kamniške in Savinjske Alpe (one of the southeasternmost groups of Alps). It is well known for the majestic view from its top and for the variety of mounteneering possibilities. It can be reached by easy (although long lasting) mountain paths, by secured climbing paths and also by hard climbing ascents. It is also one of our most beautiful mountains for tour skiing.

Almost certainly Grintovec was first ascended by neighbouring farmers, hunters and shepherds. The first recorded ascent was done by the botanist Scopoli* in 1759. The great explorer of this alpine region dr. J. Frischauf motivated two natives from Jezersko to find the passage over the north slope to Mlinarsko sedlo and to the peak.

The lithological structure of central part of Kamnik and Savinja Alps, Grintovec included, is quite simple. The upper parts of all main mountains are built of light grey triassic massive and thickly-bedded limestones and partly dolomites. 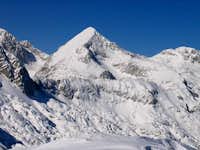 Bor - seen from the south

Grintovec is characterized by its long roof, heading towards the south. This is its common look, when we watch it from Gorenjska plane. The roof is some 500 meters high, not very steep, but enough, that in winter some care is needed. In summer, a comfortable path winds up, but in winter and spring, usually some additional equipment is needed, to come up safely. The roof can be done with skis also upwards, but conditions must be good.

There were already many casualties among skiers, who slid there on the ascent. In winter conditions this roof can also be covered with hard snow and quite some casualties were also due to that reason. All these miserables were falling down over the vertical rocks, which are below the roof. Also the passage (traverse, named Ovnov čer) from the roof towards Kokrsko sedlo (saddle) can require some care in winter or when the terrain is slippery. 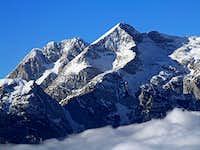 Directly from Kokrsko sedlo (saddle) to the top, so from the SE side a long ridge is ascending. As it falls on the right side (eastern) down with short, but almost vertical walls, it is called Dolge stene (Long walls). Between the roof and the ridge of Dolge stene there are two shallow basins (Zgornja Jama and Spodnja Jama), carved by the ex glacier.

toc - seen from the east

So, from the east Grintovec looks like a fine cone, rising above the ridge of Dolge stene and falling also steeply towards the north. 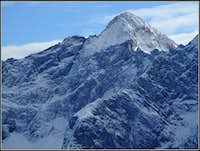 Seen from the north-west

The northern side of Grintovec is a true wall, some 500 m high. But it's not uniform, that is why it's less appropriate for hard climbs. Nevertheless, some climbs go also there. Seen from the basin above Češka koča (hut), over the left part of this wall a long used passage goes - the marked path (partly ferrata) on Mlinarsko sedlo - the saddle between Grintovec and Dolgi hrbet, which is east of it. The similar saddle between Grintovec and Kočna - Dolška škrbina can not be easily reached from the north. There some climbs also go. Otherwise, this saddle can be reached by a longer detour over Kočna slopes. The northern walls are not rising just to the top of Grintovec. The upper part is a bit less inclined scree slope, used in summer by a path coming up there from Mlinarsko sedlo. In winter this slope can also be dangerous for a slide. 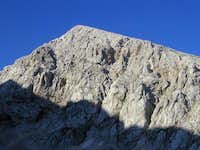 Bor - seen from the west

Finally, towards the west Grintovec falls with some 300 meters high steep rocks into Dolci, the valley between Kočna and Grintovec. The look on the mountain from this side is similar as from the east, only that we don't have such a fine ridge as it is Dolge stene, but an interesting roof above the walls. 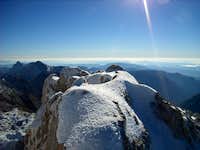 The view towards the East

As with Kamnik/Steiner Alps the long Arc of Alps is ending on the SE, the panorama from Grintovec is very broad. In the neighborhood the rocky massif of Kočna attracts most of views. On the other side, nice is also the view along the main crest of Kamnik / Steiner Alps, on Skuta and further towards Planjava and Ojstrica. Towards the south, the hilly Slovenia can be seen, in a very nice day all the way towards the Adriatic See. All other sides of the horizon are packed with the summits of Alps - from Julian Alps towards Hohe Tauern with Grossglockner, towards Dachstein and further towards many peaks of the Alps on the very eastern end.

For a broader overview see the Kamnik / Steiner Alps group page! Grintavec is easily accessible from the main road Ljubljana - Kranj - Jezersko (Austrian border). From this road you can choose the southern approach (See below #1) or from (Jezersko resort) the northern one. For the eastern approach you must choose Kamniška Bistrica valley, which is accessible by personal car from Kamnik. From Austria, Jezersko resort is accessibe over Jezersko sedlo / Seeberg Sattel. 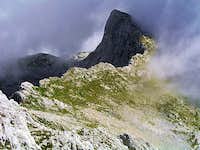 3. From Kokrsko sedlo (Cojzova koča, 1793 m) you can choose also Greben Dolge stene (The Long Walls Ridge). It's a very nice possibility, where you will find a few old mark signs only at the beginning, but you can not miss the route. From the hut follow a few minutes a well-marked path to the north, but before it turns down towards the bivouac (under the Long Walls), go directly upwards and follow the ridge. It is easy (hike) in the beginning, but when you reach the final rocks, you have to climb a little. It is not secured, nor marked! Difficulty: UIAA I+, II-. By this ridge, you can reach the top even faster than by the normal route (which descends a little).

4. Češka koča (1640 m) - Dolska škrbina (2317 m) - Grintovec. This is an ascent which is to the Dolska škrbina the same for Grintovec and the neighboring peaks of Kočna (2540 m). The route (ferrata) is called Kremžar route. On Dolska škrbina turn left (SE) and ascend by Šprem route the top of Grintovec. This combination of routes is well marked but is much harder than the south and east approaches. It is secured by permanent ropes and handholds but still requires some climbing. On some places it is also exposed, but also picturesque accordingly. From the hut you will need 3 h 30min (918 m of height difference), from the Jezersko valley 2 hours more.

5. Češka koča (1640 m) - Mlinarsko sedlo (2334 m) - Grintovec. This is also a well-marked, but steep and on many places with fixed ropes and handholds secured climbing path. You will enjoy great scenery on it. 3 h 30 min.

On a ski tour - Kokrško sedlo

6. Ski route. For ascent and skiing choose the route #1 with the described shortcut. Take care before reaching the roof - that passage is very dangerous! The roof is steep enough, so consider walking or even using winter climbing equipment. Skiing: You will be awarded by a perfect, 500 m roof. If the traverse is problematic, go approximately 150 m higher towards the east (a slight ascent) and there ski down where the slopes are steep but not so exposed. Both routes join on cca 1900 m, where you take the above-described shortcut passage (only if you ascended it too!). Then you can enjoy beautiful skiing through Suhi dol (upper part), go without skis over the rocky step (good 100 m) and ski through the woods to Suhadolnik farm and by the road to Kokra valley. Could be more than 1800 m of skiing!

The big round tour from the north

Nice round tours on Grintovec can be done also from the southern side, but the real great tour is the one from the north. On that day you will experience the best of Kamnik and Savinja Alps, do a lot of altitude difference, ascend the highest summit and enjoy the exposed passages hundreds of meters above abysses. If you add to the summit of Grintovec also the summit of Kočna (very recommended) that becomes a full one day tour. You can shorten it by sleeping in Češka koča (hut). All sections of the crossing are described on SP as separate routes, below you will find links to them.

The whole tour will take you 9 h 30 min of net walk, if you start it on Jezersko 10 h 30 min. With ups and downs it's some 1900 meters of altitude (up and as much down). In addition to that you must calculate on a few rests, so at least 1 h 30 min more. Excluding the summit of Kočna would mean 1 hour less, and if you sleep on Češka koča, that would also mean 1 h 15 min less on the second day. 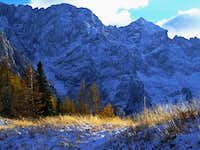 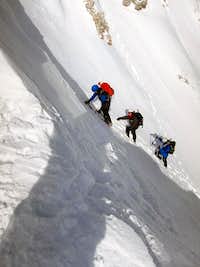 An extreme ski route goes from Mlinarsko sedlo towards the north, there, where in summer the marked and protected route goes. It was first done in April 3rd, 1976 by Tomaž Jamnik and Nejc Zaplotnik. It is graded: VI-, S6, 450 m.

Even harder is the ski descent from Dolška škrbina (the notch between Grintovec and Kočna - image on the left). In summer there goes the Fritsch-Lindenbach climbing route, III+/III,II, 400 m. In winter the wall turns into the hardest ski route in Kamnik Alps: VII/S5-S7, 700 m. It was first done in 1989 by Davo Karničar, the man who first skied down Mount Everest.

Many of those who don't ski also climb from Kokrsko sedlo directly on top through both basins of Jame. Skiing by those couloirs is not extreme, but very steep and hard enough to be considered as alpinistic skiing and not ordinary tour skiing.

There are no limitations to climb the summit besides those in yourselves. But take care of nature and consider other people. A completely different situation is in winter of course. You need complete winter equipment (irons, crampon, etc.), or, if you arrive with skis a very good skiing expertise. 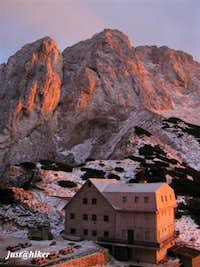 In Preddvor there is a decent hotel (Bor), also Jezersko is a well known tourist resort.

Three huts are enough to cover this mountain, there are no camping places close by, but anyhow the ascent is a one-day event. If you are traveling around these mountains you can be sure that sleeping in wilderness is very safe here. There are no dangerous wild animals and also people are friendly. But take care of nature!