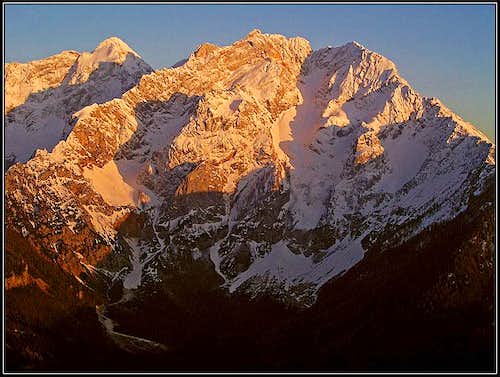 General remark: When reading Slovenian words on maps or in books, you will find special characters for ch, sh, and zh. They are written with c, s and z with a caron - little v above them. Kočna is pronounced as Kotchna.

It is interesting that the word Kočna is originally used for valleys, which lie on the northern side of the mountain. Makekova and Ravenska Kočna are near Jezersko, while Belska Kočna is further to the east. In this meaning, this toponyme is spread broader across the Alps, not only in Slovenia. The name stems from a romanic word, meaning "red". In Rhaetian Alps there are also some summits, named "cotschens", "cotschna". In latin "coccinus" means "scarlet", red colour. And indeed, also our mountain is characterised by a brittle red rock, mixed into grey limestone.

The highest two mountains of Kamniške Alps (Alps of Kamnik), Grintovec, 2558 m and Kočna, 2540 m are an interesting pair. Many say, a typical pair of peasants from Carniola district: a broad, well fed woman and a tiny, just a little bit taller man. Kočna - the woman is indeed a broad, rocky mountain with three almost equally high peaks: Jezerska Kočna (2540 m), Kokrska Kočna (2520 m) and Na Križu (2484 m). With Kočna the central part of Kamniške Alpe start. It rises high above the river Kokra valley and on the east side it passes hand to the neighbouring Grintovec. From all sides the mountain fascinates with its massiveness. Besides the three highest peaks the Kočna massif has also many lower ones, either on main ridges (NW, NE) or in a broad north face. An interesting phaenomenon is also the highest waterfall of Slovenia. Slap (=waterfall) Čedca on the northern side of Kočna was 138 m high (till the landslide), but its water reservoirs are poor, so usually only a tiny water stream can be seen.

The ascent on Kočna is high from all sides. Kokra valley on its foothills is 2000 meters below! On the northern side, on a terrace above Kokra valley, Jezersko tourist resort lies but is still only around 1000 meters above the sea level.

Kočna is primarily a mountaineering mountain. As it lacks solid rock walls it is not so popular for climbing. On the other hand it is steep and rocky enough to offer demanding hiking routes. As no easy route exists, all of them are secured artificially. Kocna is also not a typical skiing mountain. The upper part is very demanding for skiing although a descent can be done from just below the summit.

Jezersko resort, and Kočna as a playground, is the home of the famous Karničar family. Father was long time the master of Češka koča (hut) and all his children are good climbers and skiers. Davo Karničar is the first man who did the continuous ski descent from the summit of Everest to the base camp (in October, 2000). Also in Kočna Karničars did many first ascents and ski tours. 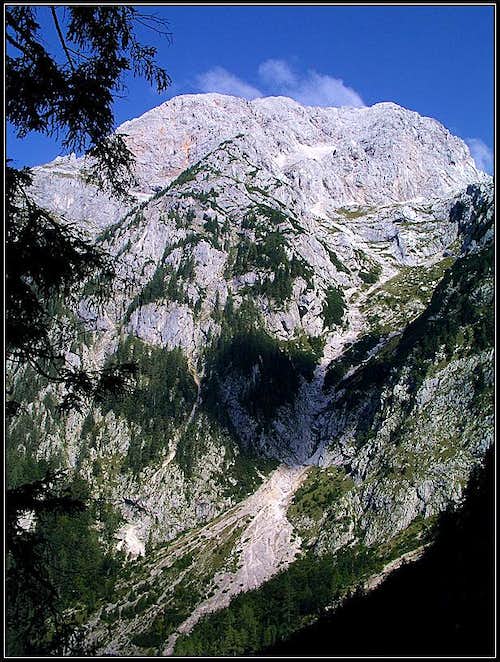 Kočna was almost certainly first ascended by members of Suhadolnik farm, who also for centuries kept sheep on its eastern and southern slopes. It was also known that in 1861 cartographers were on top. The first tourist ascent was done in 1876 by the well known mountain explorer Johannes Frischauf from Graz. He systematically climbed all main summits in Kamnik & Savinja Alps, and Kočna was among the last ones he reached.

First, Frischauf wanted to find a tourist approach on Kočna from the north, from Jezersko. In 1875 he climbed with the local guide Mavc up by the valley of Povnova dolina. They reached Kokrska Kočna, but crossing to the highes peak was not possible. Even more, on the top they met Andrej Suhadolnik, who was looking for lost sheep. He guided them by chamois passages and over a more flat part, called Plesme, down to Suhadolnik farm. Now Frischauf knew whom to ask to guide him on the highest point.

In 1876 Frischauf made the second attempt. He was guided by Primož Suhadolnik. They used the shepherds passage to Dolci, then they climbed to broad screes and through a steep ravine and summit rocks on Kokrska Kočna. Then they continued climbing by the ridge on the highest point - Jezerska Kočna. On the descent Primoz was guiding Frischauf on the NW ridge and then down to the small scree field Na Plazeh (today called Srce). Frischauf was only admiring Suhadolnik how easily he was climbing down over a difficult terrain, even lighting his pipe, not stopping to walk.

Almost from all sides Kočna looks like a broad, powerful massif. On the following pictures you can also see details, described later on ascents.

For the broader overview see the Kamnik Alps group page!

Kočna foothills is easily accesible from the main road Ljubljana - Kranj - Jezersko - Austrian border (Jezerski vrh / Seeberg Sattel). From this road you can choose either the southern approach or the northern approach from Jezersko resort.

For the southern approach you can drive by car to the Suhadolnik farm, 901 m. From the main road you deter in Zgornja Kokra (village).

From the three summits of Kočna, arranged on the summit ridge, two strong ridges are descending. The first one is the NW ridge, which hosts several small elevations and is the longest such ridge in the kamnik and Savinja Alps. The second ridge is the NE (and lower N) ridge. Between the two ridges the N face of Kočna lies, rising high above the valley of Makekova Kočna. Further east of the NE ridge there's a similar valley of Ravenska Kočna. Unlike Makekova, Ravenska Kočna ends with a nice terrace, on which the Češka koča (hut) stands. Then only steep walls are rising towards the connecting ridge Grintovec-Kočna.

Towards the SW and SE two much shorter ridges descend, forming the western, southern and eastern face of the mountain. They are all steep and rocky, but the eastern side not so high. Those walls are falling down into the high, glacial valley of Dolci. The last to mention is the east ridge, connecting Kočna to Grintovec.

1. From the south-east. This ascent is long, with a big heigth difference (from 900 m to 2540 m) and also the hut (Cojzova koča) is quite remote from Kočna. You can shorten the route not going to the hut, but then this becomes a long one day hike. From the valley between Grintovec and Kočna, named Dolci - Zgornji (Upper), Srednji (Middle), Spodnji (Lower) - you have two choices: the left one, by the bivouac and the summit of Kokrska Kočna, and the right one, over Dolška Škrbina. From Suhadolnik farm cca 5 hours. (On the detailed topo map routes: 2a, 2b and 3.)

2. From the north. From Jezersko you first ascend Češka koča (the hut, 1543 m). From there over screes to Zgornje Ravni and westwards over Kremžar route (medium hard ferrata) on the notch in main ridge - Dolška škrbina, 2270 m. From there below Kočna's east ridge to the summit. From Jezersko cca 5 hours. (On the detailed topo map route 5.)

3. Direct south scramble. Bivouac in Kočna can also be ascended directly from Suhi dol (on the map: black dotted). No path, only weak trails on some places, also details of easy climbing. On the upper part a medium hard ferrata. (On the detailed topo map route 4.)

4. Veliki vrh. In the NW ridge of Kočna the summit of Veliki vrh can also be ascended by a marked route. This is a nice short tour, which brings us higher on the slopes of Kočna. The ascent further by the ridge to the summit of Kočna requires climbing. (On the detailed topo map route 6.) See the route description of Veliki vrh, where you can find also a hike proposal for visiting the alpine meadows SW of Veliki vrh!

5. Vratca notch and its tower, 1800 m. This is a completely unimportant summit, but the marked path on it serves many visitors of Češka koča (hut), so they can enjoy also the western panorama. A few minutes the route follows the marked trail on Kočna, then for Vratca we deter right (the second branching, the first one is the old, abandoned trail). After crossing the screes we reach below the steep ravine, through which the path is secured with cables. From the notch a weak trail climbs up on the panoeramic tower above it. Route difficulty would be T4/T3. 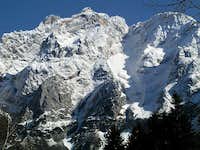 2. In the Oltarji, the summit in the NW ridge climbers also did a few short, harder climbs.

2. The SW ridge. A long, pathless scramble and climbing (500 m), with sections of climbing up to UIAA II degree. Very rarely done. The ascent starts in Suhi dol, by crossing you reach Na Plazeh basin (also called Srce), then climb up on the SW ridge. Mala vrata is a small rock summit (and notch) where the route is hardest, then you continue by the ridge on top (Na Križu) and further on Kokrska Kočna.

Above Jezersko and Kokra valley there are more than 10 waterfalls, which in winter offer good ice-climbing opportunities. The highest and quite challenging was once Čedca: topo, but today it is collapsed and extremely dangerous.

1. East slopes. From Kočna there is no normal, easy ski tour. Skiing is possible towards the East, into Dolci valley (on the upper part hard, sections are S4), but once being in Dolci, it's extremely hard to find a passage down to Suhi dol.

2. Povnova dolina. This is a very hard alpinistic ski descent, especially exposed on the lower part and on the very top. IV, sections are S5, 1200 m.

Other Items of Interest 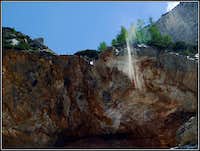 Waterfall, blown by the wind

Slap Čedca (waterfall). In the northern face of Kočna there is a waterfall, high, but usually poor with water. With 130 m it is the highest in Slovenia, but is worth visiting more or less only in times of melting snow or after heavy rain. The link to its web page is here.

That used to be once... But in June 2008 a series of landslides happend and today Čedca is no more the highest waterfall in Slovenia. On the Slovenian mountaineering organisation web page it was also written that "all the past ice climbs will stay only a nice memory..."

Sledge piste. On the forest road on northern slopes of Veliki vrh in winter Jezersko tourist club usually arranges a nice sledge piste. Its altitude difference is some 250 m.

Too late and not appropriately equipped...

The best time is from July to October. In this region the most stable weather is from August to October. If you seek adventure, the mountain can be climbed also in winter.

On the summit of Kočna take care of lightning. Red rocks indicate quantities of iron, which is very dangerous in bad weather. 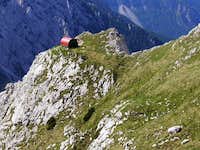 In Preddvor there is a decent hotel (Bor), also Jezersko is a well known tourist resort with some family hotels and a camping place.

1. Češka koča na Spodnjih Ravneh, 1540 m. Reachable from Ravenska Kočna (Jezersko) in 1 h 30 min.
2. Cojzova koča, 1793 m. Reachable from Suhadolnik farm in 2 h or from Dom v Kamniški Bistrici in 2 h 30 min.
3. On the south ridge of Kočna, on the altitude of 1952 m also a bivouac stands (the propriety of Mountaineering club Kranj). It has 8 beds and is allways opened.

The two huts and bivouac are enough to cover this mountain. If you are travelling around these mountains you can be sure that sleeping in wilderness is very safe here. There are no dangerous wild animals and also people are friendly. But take care of nature! 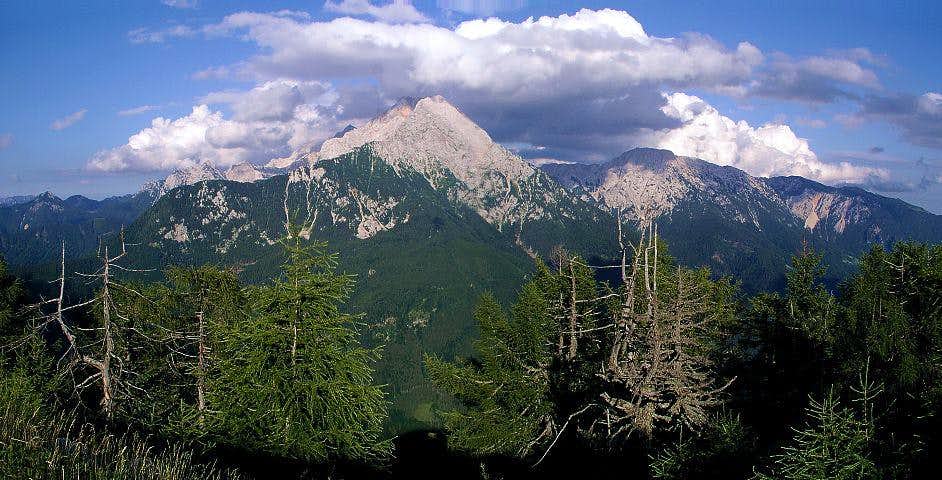