Planjava is a mountains located on the east of the pass Kamnisko sedlo (1864m). Planjava is on of the highest mountains in Kamnik Alps group and it is certainly the most powerful mountain. On its summit you can come from many sides and it is nicely approachable over marked routes. It is interesting that the marked route comes only on the lower summit 2392m and not on the highest one that is for two meters higher from the first one. But the view is the same from both summits. With one word amazing!

Planjava is very massive mountain. It has many faces with the most powerful north face that falls over 1000 meters to the north in the valley Logarska dolina. From the north side is approachable over the secured marked route over the short north face of the pass Kamnisko sedlo, then by the hut Kamniska koca and crosses the SW face of Planjava and over the south slopes to the top. To the west side is connected with the west ridge to the pass Kamnisko sedlo. SW side falls over the 700 meters and low, SW face to the valley below the pass Kamnisko sedlo on plateau Pri pastirjih (1420m) and then in the valley of Kamniska Bistrica. The south slopes of Planjava are first from the summit down the long grassy slopes called Planjavske zelenice and then over the short south face falls down in the valley Repov kot. The SE ridge goes from the top of Planjava to the saddle Srebrno sedlo that is the end of the valley Repov kot and then over the ridge of Zeleniske spice on the north side of the valley Repov kot falls down in to the valley Kamniska Bistrica. The east ridge goes from the top to the east over the summit of Lucka Brana (Baba) (2244m) on the notch Skarje (2141m) and then reaches the summit of Ojstrica (2350m).

Planjava is very heterogeneous mountain. It has many caves, natural bridges, beautiful grasses, waterfalls, undamaged nature and many other beauties.

The easiest marked route goes from the hut Kamniska koca on the pass Kamnisko sedlo over the SW face and south slopes. The second possibility is from the hut Kocbekov dom na Korosici (1808m) that is located below the south ridge of Ojstrica. The route goes over the south slopes of the ridge between Planjava and Ojstrica, reaches the saddle Srebrno sedlo and then over the SE ridge to the top of Planjava. The last possibility is that you cross beautiful ridge between Planjava and Ojstrica over marked route. There are many other unmarked possibilities: over the Planjavske zelenice (south slopes and face), through the valley Repov kot and others.

For climbing is Planjava perfect. You have many faces and the climbing routes of all difficulties. For more information and description of climbing routes check the section of Routes overview. 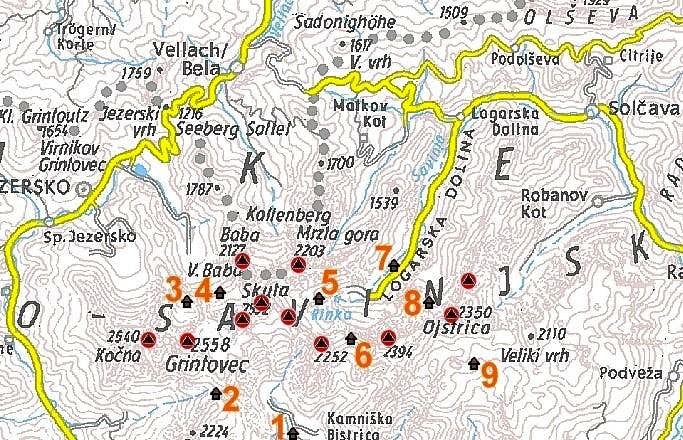 The map of the Central part of Kamnik Alps. Planjava is on the map unnamed peak above Kamniska Bistrica on the right side of the number 6.

For a better overview check the page of Kamnik Alps GROUP.

For the south approach you must choose Kamniska Bistrica valley, which is accessible by personal car from Kamnik. This is the main approach and the easiest.

For the approach from north side you must come to Logarska dolina.

East ridge from the notch Skarje

From the hut Kocbekov dom and over the SE ridge

Through the valley repov kot

Smer Dular - Juvan v Glavi Planjave. UIAA VI, A1/V, 200m. Approach is over the previous route because this route starts in the upper part of the north face.


There are also many climbing route in north, south, SE, west faces. If you are interested just say me and I will help you.

No limitations. But please take care of nature.

There is the beautiful waterfall at the end of the Logarska dolina (valley) called the Rinka waterfall.

For climbing on Planjava in Summer time is the best time in not so hot Summer and Autumn days. But when you are reaching Planjava in Spring time take care of snowfields!

For climbing couloris the best time is when the avalanches have already fallen down. For climbing in north face you have to choice not so early Spring because you will have many snowfields in the north face and it will be very cold.

In valleys there are many tourist resorts.

You can find a lot of places for camping in valleys.

Dom v Kamniski Bistrici, 601m: The hut leads in nearness of Kamniska Bistrica spring. It is supplied by PD Ljubljana-Matica. It is open all year. There is always a lot of people because is very popular point. In the hut is 33 beds for sleeping.
Phone: 003861 832 57 16

Kocbekov dom na Korosici, 1808m The is located on the plateau Korosica below the south ridge of Ojstrica and below the north face of Lucki Dedec. It has 97 beds and it is opened from the middle of June to the end of September. It has also a Winter room with 8 beds.
Phone: 0038634924850