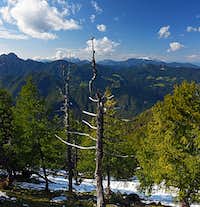 NW views
In the long ridge, separating the valleys of Logarska dolina and Robanov kot, Strelovec is the lowest summit which is still important as a hiking goal. We have here on the SP the page of Krofička, 2083, between it and Strelovec there's the rugged, more difficult summit of Ute, 1995 m. From Strelovec further to the NE, the ridge is is getting overgrown with dense woods and over a few elevations it lowers down into the valley of Savinja river. 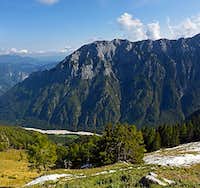 The view across Robanov kot
Both valleys are inhabited, but quite different. Logarska dolina is a touristic pearl, so many facilities serve that purpose. The road into the valley is payable and the whole valley is a well preserved natural parc. The traditional farm, now a hotel, is Plesnik. In the valley there's one mountain hut (Dom planincev v Logarski dolini, 835 m), above the valley, on the ex alpine pasture of Klemenča jama, there's another one (Koča na Klemenči jami, 1201 m). The other valley, Robanov kot, is not less beautiful and is a kingdom of Roban's family. The farm stands in the beginning, there the road is closed for public traffic.

Not much can be said about Strelovec's geology. While the highest summits of its ridge (Krofička, Ute) are built of massive, thick-layered triassic limestone, in the area of Strelovec only distinct rocks and crags are made of this kind of rock. Otherwise older triassic limestones and dolomites are prevailing, you will find also old triassic slates. That's why on the meadows there are also a few water sources.

Strelovec is just high enough to offer nice views in all directions. Towards the south we see the steep walls of the ridge on the other side of Robanov kot - from Križevnik towards Veliki vrh and Zelenica. At the end of Robanov kot the sharp, proud Ojstrica rises. It is the main feature of this panorama, the first really high summit of Kamnik-Savinja Alps. Further to the west of it we see the nothern faces of other high summits, rising above the Logarska dolina. 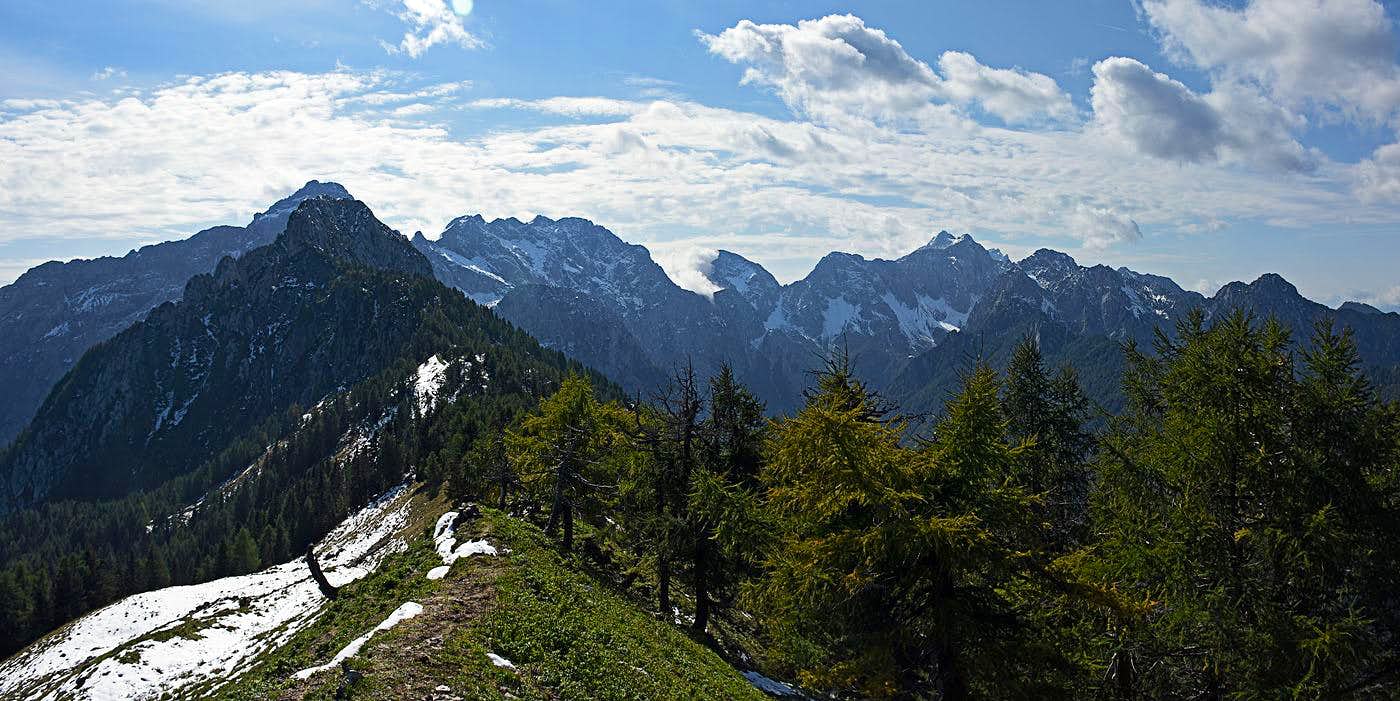 The views due SW, on the highest summits of Kamnik-Savinja Alps
More towards the north nice are the views on some high summits of the Karawanks: Košuta and Obir. The range is stretching eastwards and in the northern and northeastern direction attractive is the view on Olševa and Peca behind it. More towards the east there's the massif of Raduha, rising already on the other side of Savinja valley.

The views due NE, on the Karawanks (left) and Raduha (right).

Knez farm, the most suitable trailhead
As there are many ascent routes from all sides, there are also many trailheads. You reach them all by arriving into the valley-end of Savinja river and then eventually continuing into one of the two side valleys. The center of the area is Solčava, 660 m, which can be reached either from the SE, from the highway passing near Celje, either from the NE, from the town of Mežica, or from the NW, from Eisenkappel, over the pass of Pavličev vrh. Otherwise the parking places where we can start the ascents are the following: 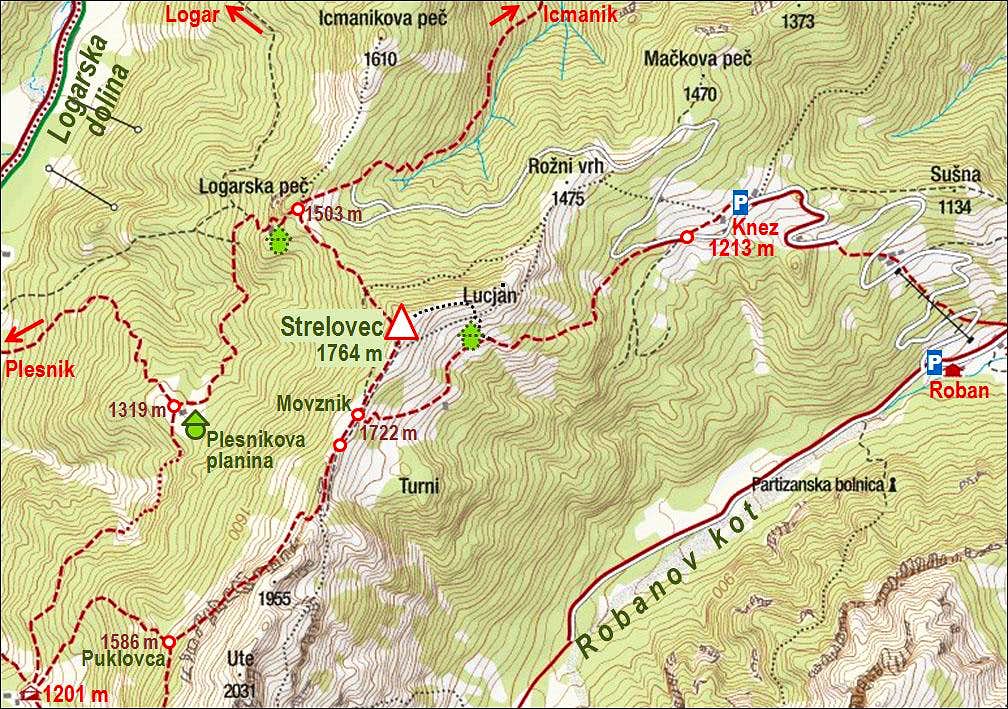 Above the Robanov kot valley

haubi - Reaching the summit
I will only outline some of the ascent routes, and say a bit more about those which I have hiked. Otherwise, due to many ex shepherds paths there are many possibilities.

1. From the Knez farm, 1213 m. This is the shortest and most used ascent route. It is easy (T2 by the Swiss Hiking Scale) and will take you some 1 h 30 min. From the farm we continue by the mountain road towards the W, but only some 200 meters. There we spot a cart-road deterring left (even slightly descending) and the table of our marked path. If you miss to deter here, don't worry. A bit higher, on a big right turn, another cart-road deters left (big red arrows there). The marked path soon crosses a weak creek, then ascends slightly, comes above on the upper cart-road and goes by it till the end. Then it continues in a moredately steep ascent through the woods, all the time crossing the slopes above Robanov kot. In some 40 minutes we reach a nice panoramic point (just left of the path) and then continue crossing by more open terrain - a light larch forrest. So we come on the ex Knez pasture (a weak water source there). Soon the terrain opens, on the right are the steep, grassy summit slopes of Strelovec.

From there, the marked path continues crossing the slopes. It detours the summit of Strelovec by the southern side and gains the main ridge on Movznik, 1722 m, SW of the summit. There we turn right and by the grassy ridge continue on top. From the meadows SE of the summit we can also take a shortcut. Simply go up and keep to the right - near the forrest edge. The terrain is a bit steep, but there are weak, useful paths. After gaining the main ridge, turn left and continue on top.

2. From the Plesnik farm, 760 m, over the Rikljeva peč. This is a more demanding, and longer path (3 h). On one place it's secured by a cable. It leads us over the Icmanikova planina (meadow) and then right on top.

4. From the Podbreg, 720 m. This is a non-marked, but not difficult variant, which spares us to pay road toll into the Logarska dolina. We start the tour on the valley entry, continue by the road into the valley, but soon go left across the creek and then continue by a cart-road and path directly to Icmanikova planina. Then as in #2 directly on top. 3 h.

5. From the Dom planincev in Logarska dolina, 833 m. This is a long approach, the trailhead is primarilly for the ascent on the higher and more attractive summit of Krofička (see the description also there). From the parking place in Logarska dolina we first ascend in 1 hour the mountain hut on Klemenča jama, 1201 m. from there we continue by the marked path up towards the summit of Krofička (not by the lower path across the slopes to Plesnikova planina). The path comfortably winds up and quickly gains altitude. So we reach the crossroads, called Puklovca, 1586 m (good 1 h from the hut till here). There we leave the Krofička ascent route on the right and continue left - all the time across the slopes. In a gentle ascent, but also with a few ups and downs we cross the slopes of the main ridge and then gain it on the grassy saddle of Movznik. From there, it's only some 10 minutes more on the summit of Strelovec. Altogether some 3 h 30 min from the valley. The path is not difficult (T2) and is well marked.

The two official mountain huts are:
You will also be welcomed in the already mentioned traditional farms: Plesnik, Roban, Knez and others.

haubi - autumn mood
Strelovec can be ascended in any season. In winter conditions the long northern approaches are probably not trodden, so consider the approach from Knez farm. Also this one requires good conditions on the steep slopes above the Robanov kot valley. Tour skiers I guess don't visit Strelovec a lot.