Maricopa Peak is the highpoint of the Ma Ha Tauk Ridge which is a subsidiary ridge north of the main ridge in South Mountain. This ridge can be clearly seen from the city of Phoenix however it can't be distinguished as a subsidiary ridge. The name "Maricopa Peak" does not appear to be official as it is not found on topo maps, however the official South Mountain Park map lists it with that name. Since the Ma Ha Tauk Ridge is separated from the main ridge by a deep valley the peak has nearly 1000 feet of prominence. According to Scott Surgent's report "the summit elevation may be as high as 2,557 feet. The map shows a tiny 2,550-foot contour, and some resources list the height at 2,557 feet. The prominence, assuming this 2,557-foot elevation, is about 930 feet." The South Mountain Park map lists the peak at 2522 feet. There are particularly nice views of the Sierra Estrella mountains along the road and also from the ridge trail. I was able to see the sunset over the Estrellas on my hike back. 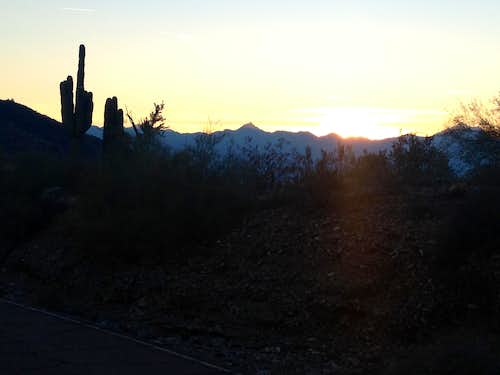 Sunset over the Sierra Estrellas from San Juan Road

Don't expect solitude on this hike as South Mountain Park is very popular among the locals and parking lots at the trailheads fill up fast on a nice weekend or holiday. The trails are also very popular among mountain bikers so it is advised to pay some attention. 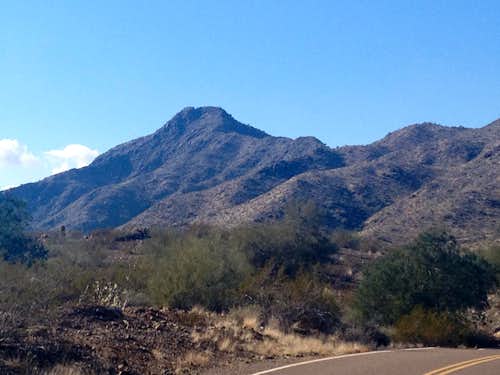 The peak as seen from the road

In Phoenix drive south on Central Ave until you reach the park entrance which is marked clearly. From the entrance continue on Stephen Mather Drive for 2 miles until you reach the gate where San Juan Road and Telegraph Pass Road split off. There is a triangular parking area at the gate and you can't continue to drive any further. Park your car here. This parking area tends to fill up on busy weekends or holidays and an early morning start might be advisable. If this parking area is full you might have to drive back down for 0.7 miles, take a right turn and then park at the "Five Table" picnic area which would add 0.7 miles of hiking distance each way along the road.

From the parking area bear right onto San Juan Road. Just after the gate you will pass a 2.0 mile marker. Follow the road for about half a mile as it looses 50 feet or so of elevation. Turn right onto the well marked Alta Trail just after you passed the 2.5 mile marker. You can clearly see the peak to your left. Initially the trails goes through a flat part of desert with a classic Sonoran scenery; the trail actually angles away from the peak. After another half of a mile the trail now starts to switchback up the slope at a fairly gentle angle. Soon you will get to the crest of the main ridge and the trail starts to angle west towards the peak. You will come to a highpoint along the ridge of 2400 feet elevation after which the trail starts to drop again. Eventually the trail angles away in a more northerly direction and makes a few ups and downs along the way. Follow the trail for almost 2.5 (from the start at the road) to a point where you are exactly due north of the peak just before the trail makes a big elevation drop. There is a prominent barrel cactus on the right side of the trail and soon thereafter a Saguaro on the left side. Leave the trail here. 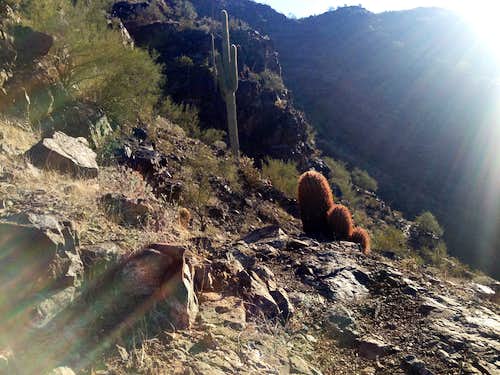 Work your way up the steep slope which can be loose in places, however it was not too bad; I actually found what looked like a faint use trail. Once above the intial slope you come to a saddle just below the summit cliffs above you. 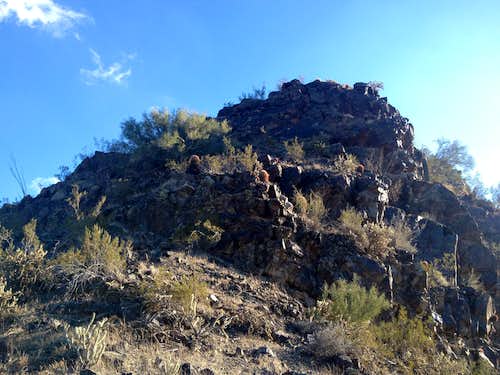 From from the saddle to the peak

Again, I was able to pick up a faint use trail which went around the cliffs on the left hand side and switch backed up the slope until you get to the top of the rocks where one class 3 move was needed to get to the summit area. The highpoint is a rock outcrop on the otherwise fairly flat but narrow summit area. You are on the north summit which is separated from the south summit by a 15-20 feet deep cleft and seems to be higher by about 2 feet. I did not find any register or benchmark. The summit area has big drop-offs and cliffs on all sides which gives the feeling of a true summit and is a cool place to hang out for a rest and to take in the views. 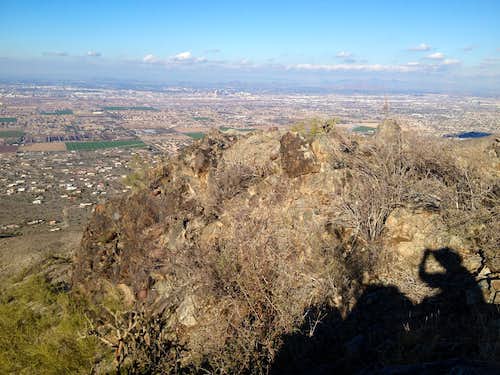 The round trip mileage was bout 6 miles with about 1300 feet of gain counting in the ups and downs along the ridge. I did not encounter anything beyond a class 2 without having to use my hands. The cliffs below the summit look pretty solid and stable though and would probably make for a fun class 3 scramble.

The hike is within the City of Phoenix South Mountain Park so the park rules which are posted at the park entrance as well as all the trailheads apply. The park is open from 5am to 11pm and the entrance gates close at 7pm. Dogs are allowed but must be on a leash.

The best time to climb this peak would be November to March as you will generally encounter pleasant temperatures and blue skies. Summer gets very hot (>110F) though people still hike here but even with a very early morning start temperatures in summer can be in the high 80s to low 90s.

No camping is allowed within the park boundaries, however since the park is within the City of Phoenix limits there are countless lodging options for any budget nearby. 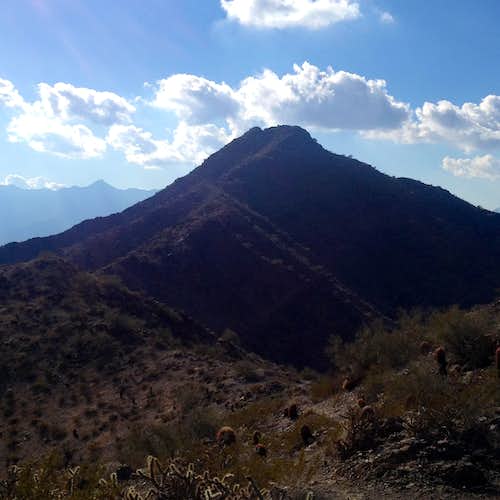 The peak as seen from the ridge trail

There is a trail all the way to the top

You never have to leave a trail. There's a decent use trail all the way to the summit from the west side.

More details on use trail

Following up on hgrapid's note, the use trail to the summit starts at the 3.04 mile mark on the Alta Trail. You can't miss it since there is a very obvious trail post. From here, it's just under 100' vertical feet to the top.