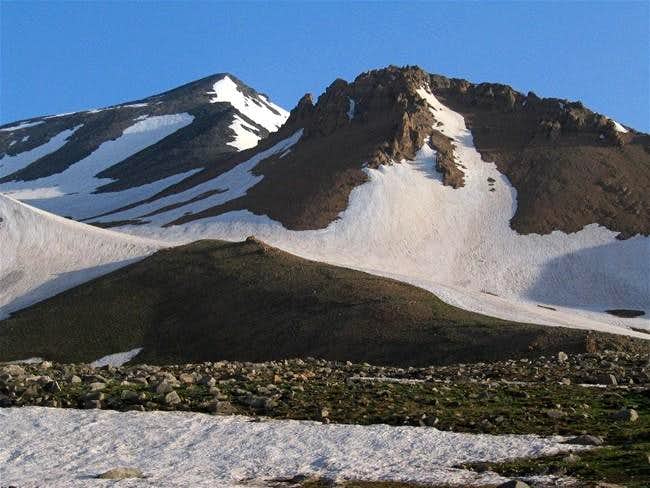 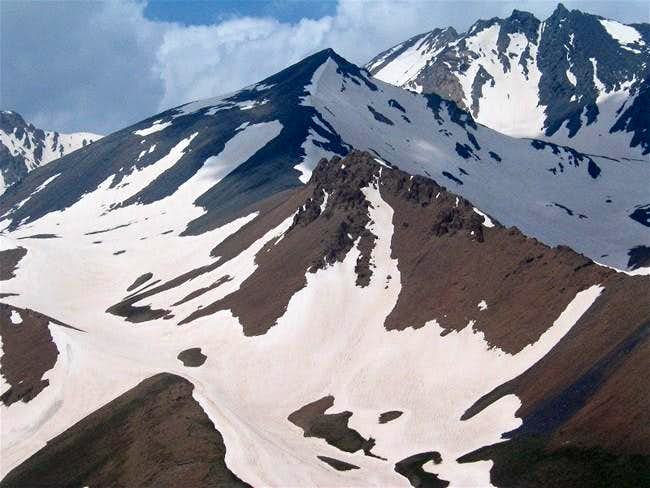 Towering above the Marji Kesh and Khersan Glaciers, Marji Kesh Peak is one of the many 15ers that form the core of the Tekhte Soleyman Massif. From the north, Marji Kesh is connected to the 4850 m (15912 ft) Alam Kooh Peak and its Shakhaks (horn-like sub-peaks). Despite an elevation that exceeds 15000 ft, close proximity to Alam Kooh causes Marji Kesh to appear, from some viewpoints, as an inconspicuous mountain that sits in the shadow of the giant Alam Kooh. From the south and southeast, however, Marji Kesh can be seen as a graceful pyramidal peak that rises above Hesar Chal, a roughly circular plateau in the southern half of the Takhte Soleyman Massif. Hesar Chal has an approximate diameter of 1.5 km (one mile), is between 3600-4000 m (11800-13100 ft) high and except to the east, is otherwise surrounded by mountains.

The long southeastern ridgeline of Marji Kesh forms a 4231 m (13881 ft) rocky sub-peak known as “Zard Gel” (translates as “Yellow Mud”), so called because of the yellowish/brown color of it. Marji Kesh and Zard Gel tower above Hesar Chal. The southern slopes of Marji Kesh are fairly gentle and can provide easy access to the summit from Hesar Chal.

The ridgeline that connects Marji Kesh to Alam Kooh separates the valley of Khersan Glacier to the west from the Marji Kesh Glacier to the east. On the crest of this ridgeline, you will find a 4533 m (14872 ft) tower that is known as Marji Kesh #2 (PIC 1, PIC 2). The Kersan Glacier Valley is bound to the north by Alam Kooh and to the west by the jagged North, Middle and South Khersan peaks plus Viran Kooh (all above 15000 ft). The steepest slopes of Marji Kesh Peak can be found to the east of it. These slopes drop down to the bottom of the Marji Kesh Glacier Valley. The north/northeastern boundary of this valley is formed by some of the Shakhaks (sub-peaks) of Alam Kooh and the Siah Sang Peak (all of these peaks are also above 15000 ft). The summit of Marji Kesh Peak forms a wall-like structure roughly 30 m (100 ft) high above its eastern slopes. This wall can be easily avoided by hiking over the southern and the western slopes.

Climbing Marji Kesh usually requires 3 days. The starting point is the village of Roodbarak (elevation 1400 m, 4700 ft). On day one, you will hike along the banks of the Sardab Rood River to Hesar Chal where you will overnight camp. On day two, you can climb Marji Kesh in addition to Alam Kooh and possibly one of its nearby shakhaks and then return to Hesar Chal. Please be ware that hiking the ridge-top that connects Marji Kesh to Alam Kooh requires bypassing the cliff known as Marji Kesh #2 that obstructs the way (see Route for details).


MAPS:
1) The most accurate topographical maps of the area are those with a scale of 1:50 000 (contour lines of 20 m) provided by the Iranian Armed Forces. You will need sheet #6162 I "Shahrestanak" for Alam Kooh and Marji Kesh(To fully cover the entire Takhte Soleyman Massif, you will also need sheet #6262 IV "Rudbarak"). These maps are available in Tehran at the Geographical Office of the Armed Forces on Moalem St. (98 21 8408088) for the equivalent of $3 per sheet (in 2004). Outside of Iran, the same maps can be purchased at www.cartographic.com for the exorbitant price of $150 per sheet (in 2003). These maps are in Farsi. While they give the exact elevation of most of the peaks, they do not give the names of the individual peaks.