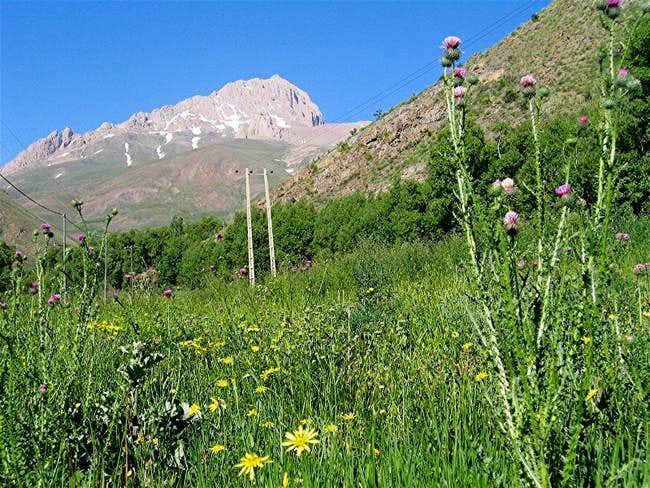 The beautiful Persian princess, the symbol of freedom! Azad Kooh (translate as “Free Mountain”) is a giant rocky summit that rises to the south of the Noor River Valley in the Central Alborz Mountains of northern Iran. The eastern, northern and western slopes of the summit of Azad Kooh are made of steep rock/walls that are more than 500 m tall. Unlike the rest of the high peaks of Central Alborz that are “bound” by high ridgelines that connect them to other peaks, Azad Kooh is a ‘free” peak that is completely surrounded by deep valleys on all sides (except for the 3800 m Chooren Pass to the southeast of it that connects it to other mountains), The prominence of this peak makes it appear as a mini version of the absolute king of the Central Alborz, the 5671 m Mt. Damavand that rises far above everything else. This has earned Azad Kooh the nickname “Shazdeh” (prince/princess). When viewed from the flower-filled meadows around the village of Minak at the bottom of the Noor River Valley (2390 m), Azad Kooh appears as a majestic peak that guards the surrounding areas. Although the upper portions of the Noor River Valley do contain a few villages, the area remains fairly isolated and is sparsely populated. Therefore, Azad Kooh remains hidden from the view of most people including the millions of the residents of Tehran that travel to the Caspian Sea resorts every year via the nearby Karaj-Chalus Rd. The mountain is, however, well known to the climbing community and sees a fair amount of traffic.

The only viable route for climbing Azad Kooh is via its southern slopes. The traditional starting spot is the picturesque village of Kalak Bala (2650 m) which sits by one of the branches of the Noor River. From there, you will hike up beautiful meadows at the base of the rocky walls of Azad Kooh to reach the 3800 m Chooren Pass where you will gain access to the steep gravel covered southern slopes. The summit is made of two spires with the same elevation. The eastern one is easier to climb. From the summit of Azad Kooh, you will have panoramic views of the Central Alborz Mountains, from the 5671m Mt. Damavand in the eastern horizon, to the 4850 m Alam Kooh Peak in the western horizon. North Side
> Views From the Summit

We were on the summit around 6 pm. Much of the views were lost to the haze of the evening/glare of the sun. If you have good summit photos of the views to the west & north, please add them and I will try to attach them here.


Zoomed Views From the Summit

From downtown Tehran drive the Tehran-Karaj Freeway 40 Km west to the town of Karaj and take the Chalus Road exit. Drive the Chalus Road up the mountains roughly 95 Km past the Kandovan Tunnel (2700 m) to a place known as Poleh Zangooleh (2350 m) where you will see a side road to the right (east). This is known as the Yoosh-Baladeh Road. Follow this road 30 Km east first up the Tarkeh Bashm Pass (2800 m) and then Labashm Pass (3170 m) to the village of Minak (2390 m). Turn south onto a dirt road (passable by most/any car) and follow it a few Km to the end of it at Kalak Bala Village (2650 m) 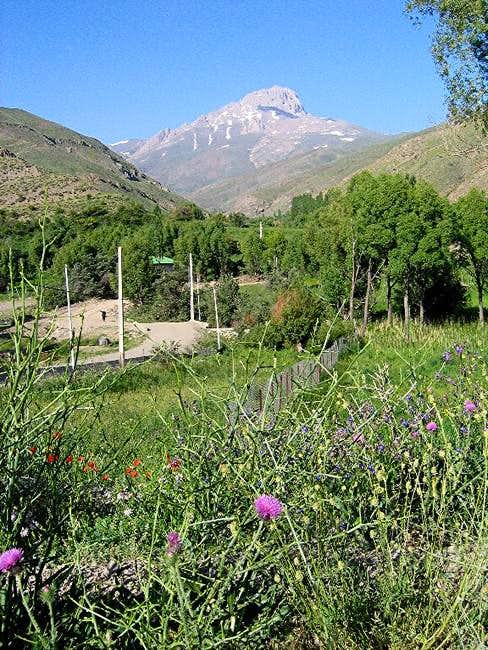 If you are not familiar with these mountains, you will benefit from the presence of a guide. I used Araz Adventure Tours and was very satisfied with their services.

Thanks, that is correct. I also read a story somewhere that said Damavand used to be shorter than Azad Kooh and it asked Simurgh to help it become taller...don't remember what exactly the story was, something like that. Do you know anything about such a story?

Yea. In ancient, Azad kooh was higher than Damavand. a dragon came to Iran and look for some where to live. He first went to Azad kooh but the mountain didn't accept him so he went to Damavand and ask to have place for home. at first Damavand didn't accept but at last it did with a clause. Damavand asked for a piece of Azad kooh which make it higher than Damavand and Dragon went at night and took a rock for Damavand. The dragon then made his home in Damavand and that is why Damavand smokes. Interesting ... anyway I read this from here (http://www.magicline.blogfa.com/cat-8.aspx) but mahdi doesn't know the reference too.

Thank you for the link and the story. I could not remember where I had read it.