Click for an Introduction to the Central Alborz Mountains. 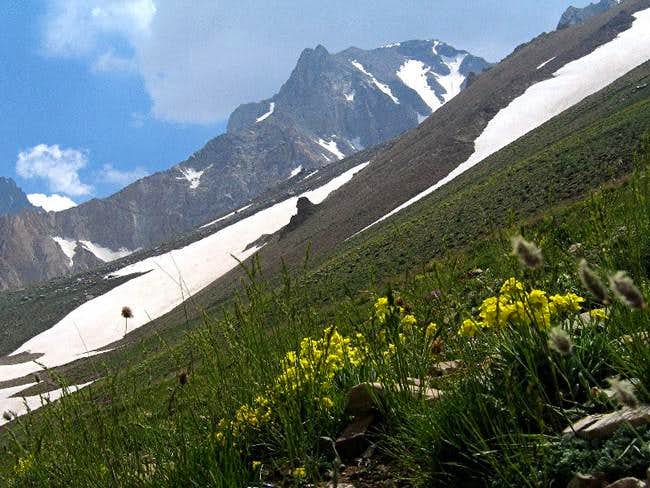 The northeastern slopes of Takhte Soleyman and sub-peak 4500 m to the left (east) of it as seen from Sarchal Shelter. Takhte Soleyman means Solomon’s Throne (seat). It refers to a peak and a sub-range (massif) in the Central Alborz Mountains of northern Iran.

To the south, a ridgeline that drops to 4400 m connects Takhte Soleyman Peak to the 4465 m Shaneh Kooh Peak. To the south of Shaneh Kooh, the ridgeline leads to the magnificent north wall of Alam Kooh. To the north, the slopes of Takhte Soleyman merge into a series of crags known as Dandaneh Ejhdeha (Dragon’s Tooth, 4400 m). To the west, you will find the junction of the valleys of Haft Khan and Split Glaciers and to the east the valley of Pa Takht (Takhte Soleyman) Glacier.

Takhte Soleyman is a very rugged peak whose slopes are covered by cliffs/needles many of which can be thought of as sub-peaks. Chief among these are two “towers” (4453 m & 4480 m) as well as a large flat-top area (4500 m) on the south slopes and a “horn” (4500 m) to the east. Despite this, the main route to the summit is non-technical thanks to a boulder/scree covered area to the south.

Climbing Takhte Soleyman usually takes three days. The traditional starting place is the village of Roodbarak (1400 m) to the northeast. From there, you will hike or drive a dirt road 10 km to a place known as Vandar Bon (2300 m) where you can hike a trail up the Barir drainage roughly four hours to the Sarchal Shelter (3750 m) which is a multi-room stony building that is full of bunk beds (metal frames and wooden slats). It can probably house 100 or more people. Running water is piped from a nearby stream into a small pool. You will then hike up the valley of Alam Chal Glacier (no technical equipment needed) to the base of the Shaneh Kooh Peak and up to the 4400 m saddle between Shaneh Kooh and Takhte Soleyman where you will gain access to the mentioned southern slopes ( for more details, see “Route” for Shaneh Kooh Peak). Please be ware that to reach the saddle you will need to hike all the way up to near the summit of Shaneh Kooh and then descend down to the saddle. The saddle can theoretically be accessed via the valley of Pa takht Glacier above Sarchal Shelter but for whatever reason this is generally not done (maybe due to obstacles I am not aware of).

Unlike Alam Kooh which for the main part remains hidden from view, Takhte Soleyman Peak is well-visible from the village of Roodbarak (PIC 1, PIC 2). 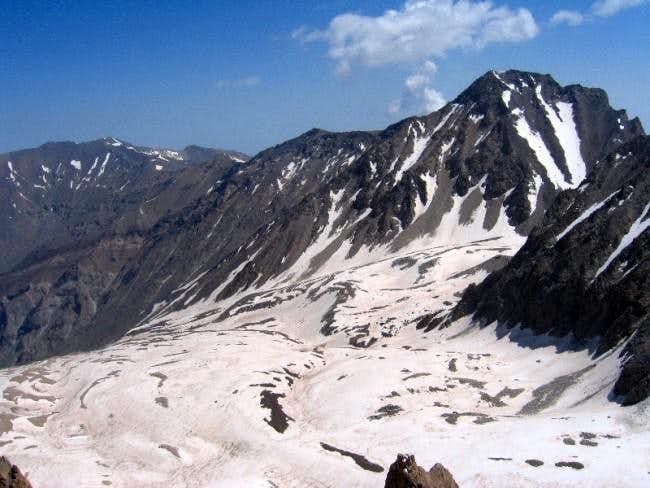 The southern and western slopes of Takhte Soleyman rising above the junction of the valleys of Haft Khan & Split Glaciers. 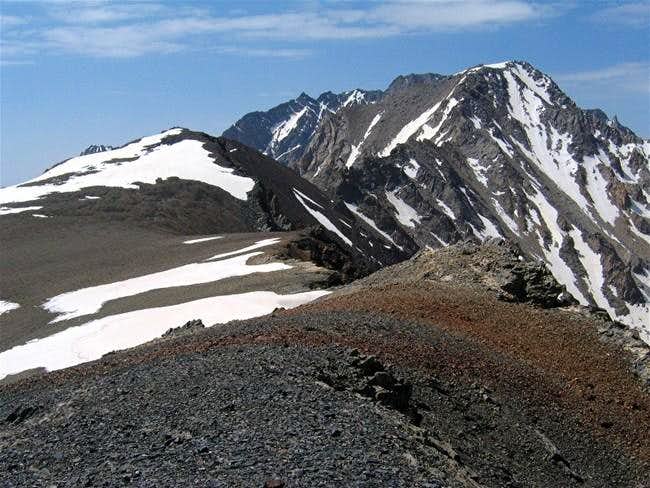