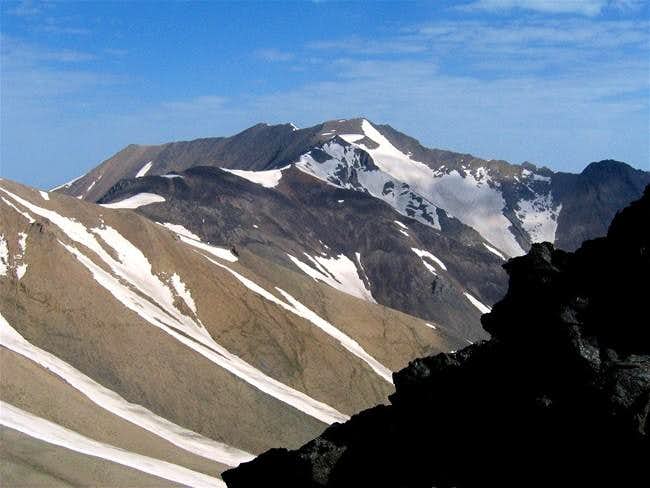 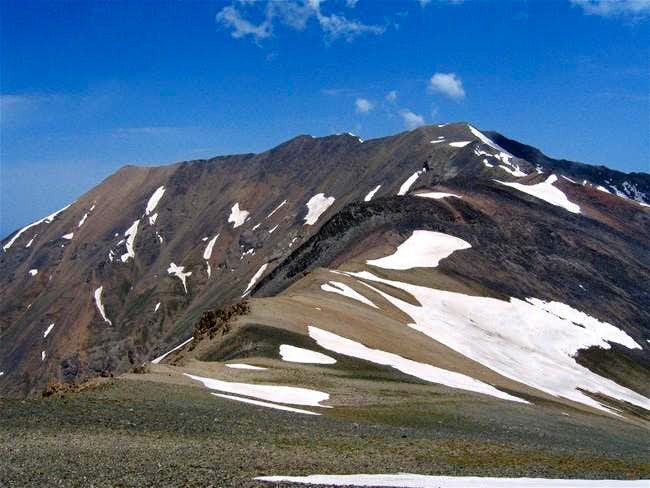 Kalahoo is the northern-most high peak (above 4400 m) of the Takhte Soleyman Massif. The main spine of the massif is made of a 19 km (12 mile) long ridgeline that runs north-south and is entirely above 4000 m (13123 ft). At the summit of Kalahoo, the ridgeline forms a “T”. A side branch heads 2 km east before dropping below 4000 m while the main branch runs 2 km west where it makes a sharp 90 degree turn going back north for another 2 km then dropping below 4000 m. This creates a 4 km (2.5 mile) long ridgeline that runs east-west, parallel to the Caspian Coast but more than 4000 m above it. Kalahoo is the highest point of this ridgeline.

The northern slopes of Kalahoo are very steep and drop to the bottom of a valley that runs north all the way to the coast of the Caspian Sea. The proximity of the Alborz Mountains to the Caspian Sea creates a virtual “steam bath” on the northern slopes of the Alborz. This “steam bath” becomes even more intense in the area north of Kalahoo. If you like to watch clouds, you will love the view from the summit of Kalahoo where you will find fog filled valleys below you. Watching the clouds rising above the slopes in a futile attempt to overcome the impenetrable barrier that the Alborz Mountains have created can be very fascinating. In the end, the clouds will have no choice but to relinquish every drop of their moisture over the northern slopes creating a heavenly lush environment that is in sharp contrast to the barren plateaus of central Iran only a 100 km to the south. If you are lucky, the clouds might allow you to get a glimpse of the Caspian Sea in the northern horizon.

To the south of Kalahoo, the main ridgeline of the Takhte Soleyman Massif drops to a minimum elevation of 4104 m (13465 ft) at a saddle known as Kaljaran Pass. Between Kalahoo and Kaljaran Pass, there are a few other peaks/high points such as Nefar Neghar (4199 m, 13776 ft) and Mishvar (4267 m, 14000 ft). Nefar Neghar is an interesting rocky “chimney” that rises about 10 m (30 ft) above the crest of the ridgeline. As an added bonus, Nefar Neghar can be climbed on the way to the summit of Kalahoo.

To the east of Kaljaran Pass, steep slopes go down to form a canyon/tight valley known as Kaljaran Valley. This valley eventually joins the Sardab Rood River Valley and continues east to reach the village of Roodbarak (elevation 1400 m, 4700 ft) which is the traditional starting point for climbing the peaks of the Takhte Soleyman Massif. If you are in good shape, you might be able to climb Kalahoo in a single day. From Roodbarak, you will drive a dirt road to a place just above the Vandar Bon Village at 2400 m (7900 ft) where you will start a grueling 9.5 km (6 mile) long hike up the Kaljaran Valley to reach the Kaljaran Pass. During this hike, you will follow a roaring stream whose banks are covered with bushes and wild flowers. In a few places, the dense growth might hinder your progress. From kaljaran Pass, you will turn north and follow the top of the ridgeline to Kalahoo.

Kalahoo is a wonderful peak whose summit will be an excellent spot to witness the daily battles between the clouds and the Alborz Mountains. Looking south from the summit of Kalahoo gives you a superb view of the northern half of the Takhte Soleyman Massif. If you choose to do a south to north traverse of the massif, Kalahoo (and its neighbors) will be the last peak that you climb, a well deserved reward for your efforts. 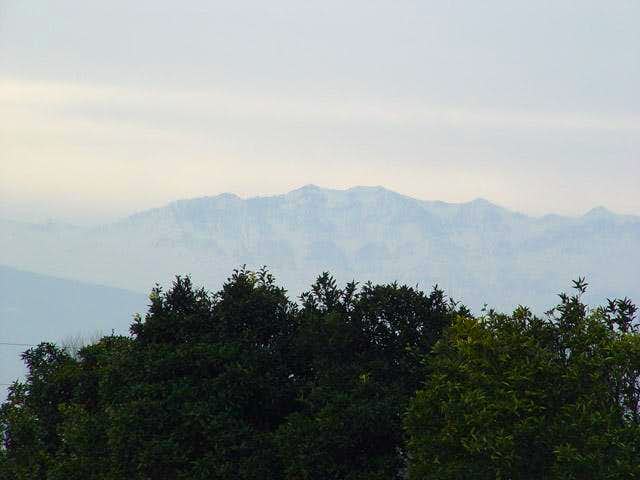 Kalahoo from the Caspian Sea Coast, photo by nomad.


MAPS:
1) The most accurate topographical maps of the area are those with a scale of 1:50 000 (contour lines of 20 m) provided by the Iranian Armed Forces. You will need sheet #6162 I "Shahrestanak" for Alam Kooh and Kalahoo(To fully cover the entire Takhte Soleyman Massif, you will also need sheet #6262 IV "Rudbarak"). These maps are available in Tehran at the Geographical Office of the Armed Forces on Moalem St. (98 21 8408088) for the equivalent of $3 per sheet (in 2004). Outside of Iran, the same maps can be purchased at www.cartographic.com for the exorbitant price of $150 per sheet (in 2003). These maps are in Farsi. While they give the exact elevation of most of the peaks, they do not give the names of the individual peaks.