I am not aware of any maps that show the elevation of this peak. The above figure is per my GPS/altimeter. 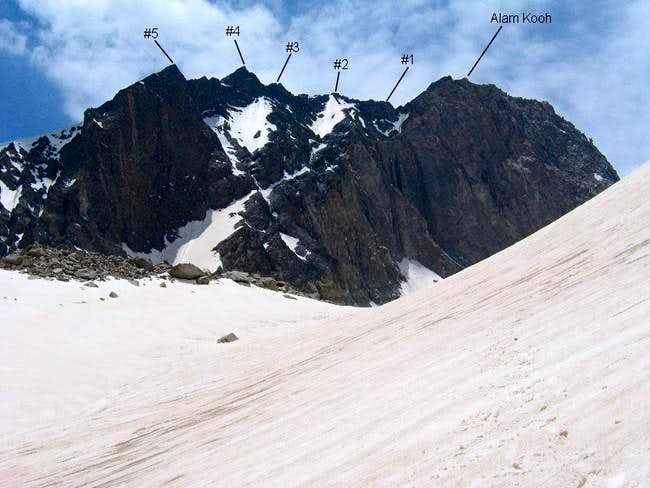 ALAM KOOH AND ITS SHAKHAKS FROM THE NORTH, NEAR 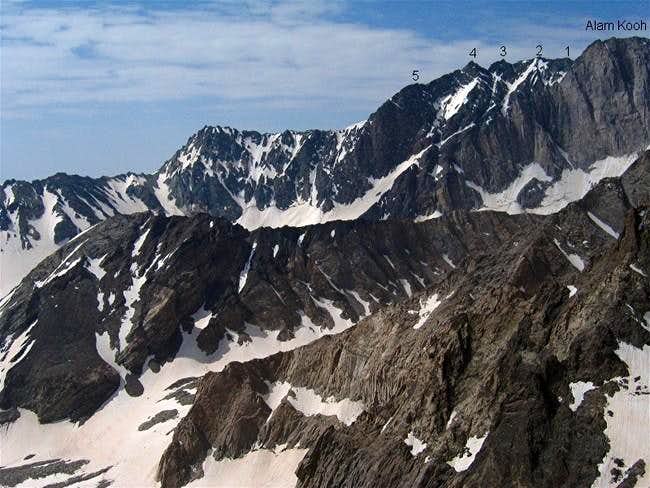 ALAM KOOH AND ITS SHAKHAKS FROM THE NORTH, FAR 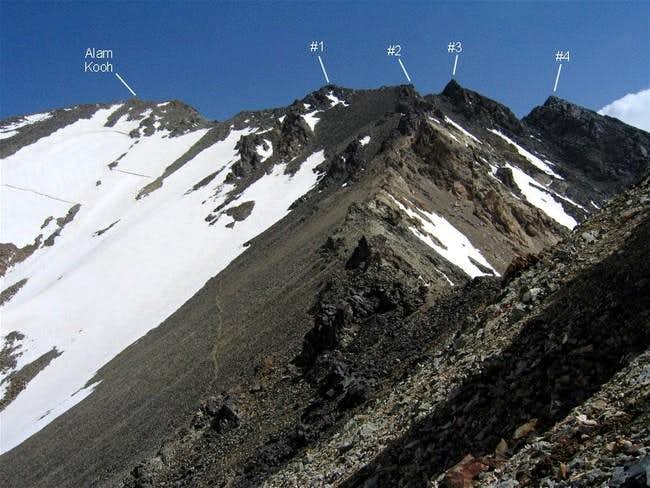 ALAM kOOH AND ITS SHAKHAKS FROM THE SOUTH, NEAR 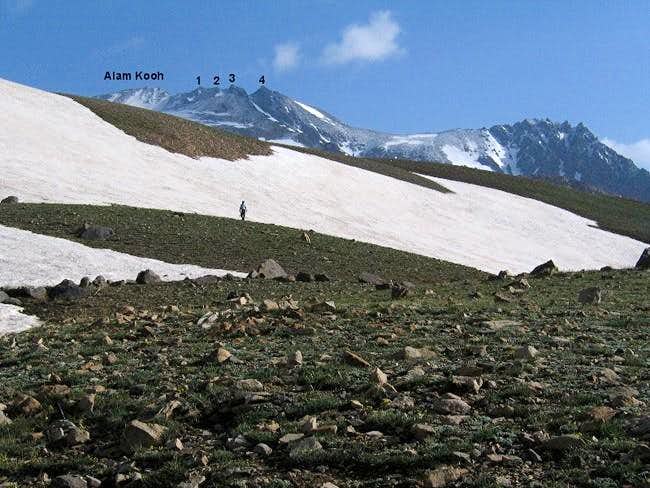 ALAM KOOH AND ITS SHAKHAKS FROM THE SOUTH, FAR

After the 5671 m (18606 ft) summit of Mt. Damavand, the 4850 m (15912 ft) Mt. Alam Kooh is the second highest peak in Iran. Unlike Damavand which is a single volcanic cone that rises far above the peaks around it, Alam Kooh sits in the middle of the Takhte Soleyman Massif which has other peaks with comparable elevations. The upper portion of Alam Kooh is made of a one km (0.6 mile) long east-west running ridgeline that is entirely above 4700 m (15420 ft). The summit of Alam Kooh is a gigantic rocky block that occupies the western one quarter of the ridgeline. To the east of it, there are other high points, some of which can be thought of as individual peaks in their own rights. These are known as the “Shakhaks” (Horns) of Alam Kooh. I have personally identified and numbered five such shakhaks as noted in the above pictures.

The northern slopes of Alam Kooh and its shakhaks form walls that drop 400-600 m (1300-2000 ft) into the upper portions of the Alam Chal Glacier. The most impressive of the walls is that of Alam Kooh itself: 400 m (1300 ft) of near vertical wall plus 200 m (650 ft) of very steep glacier at the base. Shakhak #5 also creates a very high wall but good information about this wall is hard to find and it is not clear to me if it has ever been climbed.

The southern slopes of Alam Kooh and its shakhaks are steep and are covered with boulders and/or scree. These slopes form the north end of the valleys of Khersan and Marji Kesh Glaciers.

If you want something above and beyond the experience of the average climber who comes to this area, you would surely want to climb one of the shakhaks of Alam Kooh. #1 is the closest one to Alam Kooh and can be easily combined with it. Except for the last few hundred meters, the route will be the same. From the great summit of Shakhak #1, you will get a unique view of the north wall of Alam Kooh that is rarely seen by others. You are also guaranteed to have the whole summit to yourself.

Unless you plan to do serious technical climbing, you should use the southern slopes to reach the summit of Alam Kooh or its shakhaks. You can, however, approach the southern slopes from either the south or the north. The starting point for both routes is the village of Roodbarak (see below). Both routes usually require three days.

1) From the north: (although I have been on portions of this route, I have not done the most difficult part of it, from Alam Chal Glacier to Siah Sang Peak). From Roodbarak Village (elevation 1400 m, 4700 ft), you will hike or drive a dirt road to Vandar Bon Village (elevation 2300 m, 7500 ft) where you can follow a trail up the Barir Drainage to overnight camp at the Sar Chal Shelter (3750 m, 12300 ft).The next day, you will hike to the Alam Chal Glacier (4200 m, 13800 ft) and then go up a steep scree slope to the 4400 m (14400 ft) Chaloon Pass. You will then climb to the top of the 4604 m (15105 ft) Siah Sang Peak via its steep rocky ridge (when I was there in late June, this ridge was covered with ice and snow making the route a technical climb. By late summer, however, most of the snow will melt away). From the top of Siah Sang Peak, you might mistake one of the eastern-most shakhaks for the summit of Alam Kooh. Veer left over the southern slopes and bypass the eastern shakhaks below them to reach near the saddle between Alam Kooh and #1 where some boulder hoping will get you to the summit of #1.
2) From the south via Hesar Chal: (see Route for detailed info) this is the longer but the easier of the two routes. It does not, however, allow you to see the famous north wall of Alam Kooh as it appears from the Alam Chal Glacier.

Warning:
The knife edge that forms the summit of Shakhak #1 can act as a lightning rod. I was on the summit as a storm was approaching. Twice I heard static electricity building up in my hair and in my camcorder. I was lucky not to be struck by lightning. At the first sign of a storm, descend to lower elevations.

Sitting at the bottom of the Sardab Rood River Valley at an elevation of 1400 m at the base of the northeastern portion of the Takhte Soleyman Massif, the town of Roodbarak has been serving as the usual starting point for climbing the peaks of the Massif. The lush sub-tropical forest that covers much of the southern coast of the Caspian Sea and the northern foothills of the Alborz Mountains, also covers the slopes of the mountains near Roodbarak. These forests usually extend up to an elevation of 2000-2400 m.

Roodbarak has become a favorite destination for the residents of Tehran who have built many vacation homes in and around this town. The Iranian Mountaineering Federation owns and operates a shelter/hotel in Roodbarak. From Roodbarak, you will not be able to see Alam Kooh or its Shakhaks but the giant pyramid of the Siah Kaman Peak (4472 m, 14672 ft) will be looming above you to the west. To the north of it, the 4659 m (15285 ft) Takhte Soleyman Peak and some of the other peaks to the north of it will also be in good view. Watching these snowy summits from the steamy forests of Roodbarak is an experience that you are not likely to forget. Shakhaks from the summit of Alam Kooh (Photo by Alamkuh)


MAPS:
1) The most accurate topographical maps of the area are those with a scale of 1:50 000 (contour lines of 20 m) provided by the Iranian Armed Forces. You will need sheet #6162 I "Shahrestanak" for Alam Kooh (To fully cover the entire Takhte Soleyman Massif, you will also need sheet #6262 IV "Rudbarak"). These maps are available in Tehran at the Geographical Office of the Armed Forces on Moalem St. (98 21 8408088) for the equivalent of $3 per sheet (in 2004). Outside of Iran, the same maps can be purchased at www.cartographic.com for the exorbitant price of $150 per sheet (in 2003). These maps are in Farsi. While they give the exact elevation of most of the peaks, they do not give the names of the individual peaks.