PURPOSE OF THIS PAGE

A search on the internet reveals very little useful information about the Alborz Mountains. This page will hopefully introduce the reader to these mountains and provide an interactive map that will allow the reader to zoom on pre-selected areas. A partial list of those peaks whose elevations exceed 4000 meters has also been provided. I am not aware of any other source that provides such a list. Most of these peaks have been linked to a page or at least a picture. As new pages/pictures are added, new links will be made. 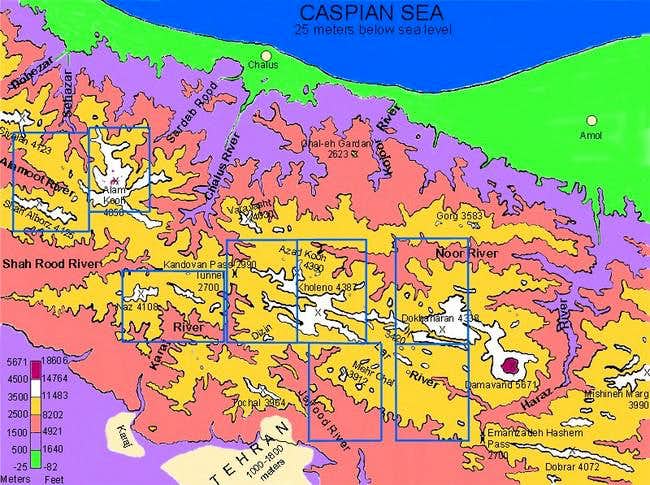 Click on above map to zoom on selected areas. 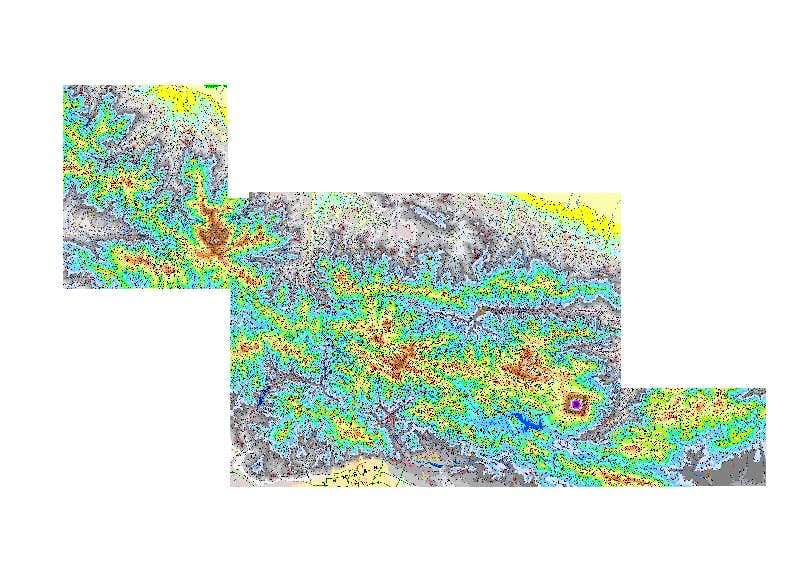 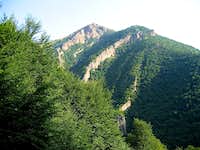 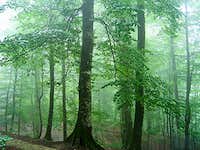 The term “Alborz Mountains” has been loosely used in reference to all of the mountains of northern Iran, from the Turkish border to the northwest, to the border with Afghanistan to the northeast (a distance of more than 1500 km). The Alborz Mountains gain their maximum height and density along the southern shores of the Caspian Sea where they create a formidable barrier that separates the coastal plains from the internal plateau of Iran. Close proximity to the Caspian coast has created a steamy lush environment on the coastal plains and the northern-most slopes of the mountains. In some places (near the coastal towns of Ramsar and Noshahr), the strip of land between the mountains and the sea is no more than one kilometer wide.

The southern slopes of the Alborz drop onto the central plateau of Iran. The average elevation of this plateau at the base of the mountains is around 1500 m (Please be aware that the plateau itself is covered by other scattered mountains. In fact, there are few places in Iran where mountains can not be seen on the horizon). In contrast to the lush northern slopes, the southern slopes of the Alborz Mountains are barren. Trees can be found only on stream banks at the bottom of the valleys. Grasslands, alpine tundra, and permanent snow cover the higher slopes of the Alborz. Evidence suggests that in the past, glaciers used to cover a much larger area of the Alborz Mountains than they do today. At the present time, glaciers can be found on Mt. Damavand, Takhte Soleyman Massif, Mt. Sabalan, and to a much lesser extent on some of the higher peaks of the range. Winter brings a heavy coat of powdery snow that creates an ideal environment for skiing. The abundance of snow gives rise to fairly large mountain streams that provide fresh water for the nearby cities including the 10 million-plus mega-city of Tehran. When viewed from space, some of these streams appear to have dug deep gorges that penetrate into the heart of the mountains. The distance between the 5671 m Mt. Damavand and the bottom of the Haraz Valley to the northeast of it where the elevation is only 1000 m is no more than 17 kilometers.

TEHRAN AND THE ALBORZ MOUNTAINS

The capital city of Tehran sits on a plain at the foot of the Alborz Mountains. The 3964 m Mt Tochal creates a dramatic background for Tehran's skyline.

1) A few peaks around the 4811 m summit of Mt. Sabalan in northwestern Iran
2) Depending on how you count them, around one hundred in Central Alborz

The boundaries of Central Alborz can be defined as follows (300 km E-W by 90 km N-S. See Signature Photo):
-South of the Caspian Sea
-North of the Capital city of Tehran and vicinity
-East of the Coastal town of Rasht
-West of the coastal town of Sari

Much of Central Alborz consists of very long parallel ridgelines that generally run east-west (parallel to the coast of the Caspian Sea). Deep valleys divide these ridgelines into distinct “groups”. Defining individual peaks along the length of these ridgelines that might be many tens of kilometers long and entirely above 3500 or 4000 m, can be arbitrary. Except for the prominent peaks, it appears that traditionally names have been used in reference to whole groups of peaks rather than individual ones. While many peaks remain nameless, others might be known by different names. The most accurate maps of the Alborz Mountains are those with a scale of 1:50 000 (see below). These maps provide exact elevations for hundreds of peaks/high points on each sheet but they leave most peaks without a name. It seems that the climbing community in Iran has recently started to publish maps that identify individual peaks and provide them with names (that will hopefully standardize). I am not aware of the criteria used for identifying these “Peaks” but looking at the 1:50 000 maps reveals that most of these peaks are at least 50 m higher than their surrounding saddles (most are much more than that).

The higher than 4000 meters peaks of Central Alborz can be divided into several groups as below:

After the single volcanic cone of Mt. Damavand that rises to 5671 m (see below), the Takhte Soleyman Massif contains the highest peaks of Central Alborz (and the only place where the elevation of the peaks exceeds 4400 m). The crest of the massif consists of a 19 km long ridgeline that runs (unlike the rest of the ridgelines in Central Alborz) north-south and is entirely above 4000 m. Two branch ridgelines (the Haft Khan and the Chaloon/Siah Kaman ridgelines) bring the total length of the interconnected ridgelines that are entirely above 4000 m to 30 km (there are other connecting ridgelines that are partially above 4000 m).

Deep “V-shaped” valleys that surround the massif to the east, north and west of it, are heavily forested and drop steeply to the Caspian Sea. Sheer walls and high “U-shaped” valleys point to extensive glacial activity in the area. In fact, the massif contains the largest collection of glaciers in Iran.

In his “Takhte Soleyman Massif” page, Summitpost member “nomad” gives a list of 160 peaks that are higher than 4000 m. I simply do not have enough detailed information to know how many of these peaks pass the rule of “91 meters (300 ft) above the surrounding saddle” that is used in the Colorado Mountains of western United States for defining individual peaks. My personal experience in the massif and consulting the 1:50 000 maps seem to indicate that there are at least twenty peaks higher than 4400 m that probably meet the rule of 91 meters as listed below. Lower than 4400 m, the peaks become too numerous for me to count.

Some of the more prominent peaks of the massif below 4400 m that are represented on Summitpost by a page or a picture are as follows: (by no means a complete list)

b) MT. DAMAVAND AND THE MIDDLE WALL OF CENTRAL ALBORZ

The spine of this area consists of an 80 km long ridgeline that starts with Mt. Damavand (to the west of the Haraz Valley) and stretches west to near the Kandovan Pass on Karaj-Chalus Road. Except for the 3420 m Kabood Pass, the elevation of this ridgeline never drops below 3500 m. If you add the length of the many branches of this ridgeline, you will come up with more than 150 km of interconnected ridgelines whose elevations are entirely above 3500 m (except for Kabood Pass). High glacially carved valleys can be found near some of the higher peaks (especially Kholeno and its nearby peaks). I am not a geologist but these valleys seem to point to glacial activity in the distant past. While today, some snow remains in the valleys year-round, by late summer, the remaining snow patches are probably not large enough to be classified as “glaciers”.

The 5671 m summit of Mt. Damavand that rises on the eastern-most part of this ridgeline is by far the highest peak of Central Alborz (and the Middle East). Damavand is an almost perfect volcanic cone whose superior height makes it visible from miles away. After Mt. Damavand, the highest peaks of this area are in the low 4000-meter range as listed below. The 4000 m peaks can be lumped into two distinct groups: The Kholeno Massif to the west and the Dokhaharan Massif to the east. (I have tried to limit the list to only those that seem to rise at least 50 meters above their surrounding saddles)

Part of the Kholeno Massif

A 21 Kilometer long east-west running ridgeline that rises entirely above 3500 m. The 4000 m peaks are as follows:

This area contains a series of peaks with elevations above 3500 m in the northwestern corner of Central Alborz close to the Caspian Sea. There are three peaks here with elevations higher than 4000 m:

Siyalan rises more than 3000 m above the upper portions of the Dohezar River Valley which is a heavily forested valley that drops steeply into the Caspian Sea.

A long chain of peaks forms a line that runs east-west in western-Central Alborz north of the Karaj River Valley and south of the Shah Rood River Valley. The elevations of these peaks are mostly above 3700 m. Only two peaks are higher than 4000 m:

A 52 km long ridgeline that runs east-west in the southeastern part of Central Alborz. The elevation of 32 km of this ridgeline is entirely above 3500 m. Depending on how you count them, there are at least 5 peaks higher than 4000 m. West to east, these include:

A number of peaks higher than 3500 m that tower above the southeastern Chalus River Valley. The 4030 m Veravasht (Dehla) is the only local peak higher than 4000 m.

Much of Central Alborz is a protected area. Camping is allowed but hunting will require a license.

Click here https://iranianvisa.com/ for info about obtaining a visa to visit Iran.

The following is a quote from SP member BigLee:

"As for Iranianvisa.com they're definitely worth using. You apply online. The visa only takes a couple of weeks to obtain and you don't have to pay anything if you are declined. Their service charge was $30 in 2004 which you just pay at an Iranian bank once you are in Iran. The chances of getting a visa are far better than going directly to the embassy. They pretty much guaranteed they could get me a visa despite the London embassy being problematic for visas. You can also collect your visa at an embassy of your choice which is handy if you are traveling around (I got mine in Istanbul). Once the visa has been authorised, Iranianvisa give you the authorisation code from Tehran which you take it to your chosen embassy with your passport and then the following day you collect your visa. Doddle!

Mid-June to early October. I prefer late June/early July when there is still much snow on the mountains. On the lower slopes, the grass is green and flowers are in bloom. Too much snow, however, will obviously make the climb harder.

Many people climb these mountains in winter. That obviously requires training and special equipment. CampingGenerally, camping is allowed anywhere. You will also find mountain huts in the more popular areas.

In summer, the weather is generally clear. Isolated thunderstorms (sleet/snow at higher elevations) do happen.

The most accurate topographic maps of the area are those with a scale of 1:50 000 produced by the Iranian armed forces, These maps are available in Tehran at the Geographical office of the armed forces on Moalem St. (Tel 98 21 88408088). Outside of Iran, the same maps can be purchased at www.cartographic.com for a very high price. These maps are in Farsi. While they provide accurate/detailed topographic info, these maps do not necessarily provide a name for each and every peak. For the Takhte Soleyman Massif, “The Guide map of Takht-e-Soleiman & Alam Kuh Region” by Iran Kuhro and for the mountains between the Karaj/Chalus and Haraz Rivers the “ Guide Map of Climbing the Peaks of Central Alborz” by Gitashenasi provide additional information and names for most of the peaks. These maps are schematic (cartoon-like) and distort distances and relative positions but can be useful when used with the 1:50 000 maps. The maps provided here have been created by me based on the 1:50 000 maps and are to scale.