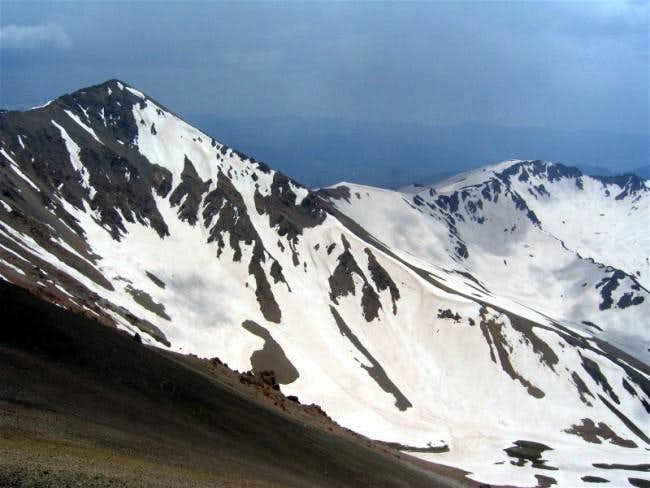 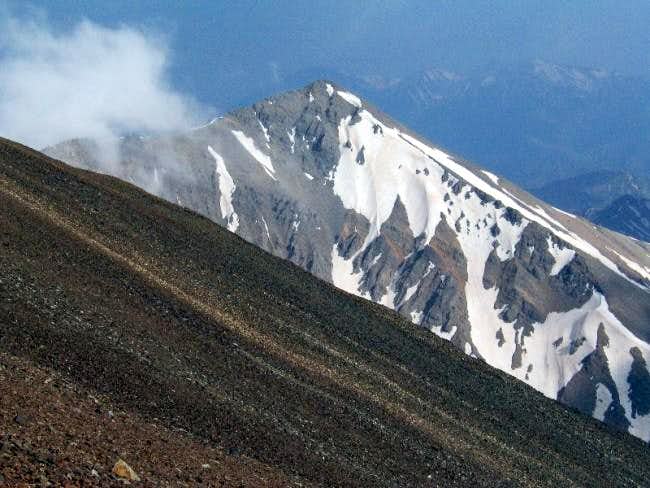 "Hesar Chal" is a roughly circular plain with an approximate diameter of 1.5 km (one mile) in the southern third of the Takhte Soleyman Massif. It is gently sloped, drains to the east and is 3600-4000 m (11800-13100 ft) high. To the north, Hesar Chal leads to the valleys of Khersan and Marji Kesh Glaciers. The main spine of the Takhte Soleyman Massif forms a continuous line of peaks to the west and south of Hesar Chal. Gardooneh Kooh is the highest of these peaks. Unlike the jagged peaks that surround Alam Kooh in the central portion of the massif, the southern peaks are gentle and are easy to climb (except for the rocky horn that forms the summit of the Menareh Peak).

A minimum of three days is usually needed to climb Gardooneh Kooh (see Route). The starting point is the village of Roodbarak (elevation 1400 m, 4700 ft). From Roodbarak, you will hike up the valley of Sardab Rood River to Hesar Chal. This hike will take you past beautiful meadows that in early summer are covered with wild flowers. Snowy peaks provide dramatic backgrounds for these meadows (PIC1, PIC2, PIC3, PIC4). Just below Hesar Chal, the valley becomes narrow. This area is known as "Tange Galoo" (literally translates as "Throat Narrows"). Frequent winter avalanches create huge piles of snow that remain here year round (PIC!, PIC2).

Hesar Chal is an ideal place for overnight camping because it can provide quick access to many of the nearby peaks including Alam Kooh. When we were in Hesar Chal in late June, most of it was still covered with snow. By mid summer, flowers and grasses come to replace the snow. The eastern slopes of Gardooneh Kooh rise directly above Hesar Chal and give easy access to its summit. From the summit of Gardooneh Kooh you will have great views of the southern slopes of Alam Kooh and the other jagged peaks that surround the Khersan Glacier. To the east, west and south, you will find other nearby peaks of Central Alborz outside of the Takhte Soleyman Massif. The very long northwestern ridge of Gardooneh Kooh drops 900 m (3000 ft) into the upper portions of the Garma Rood (Sehezar) Valley. 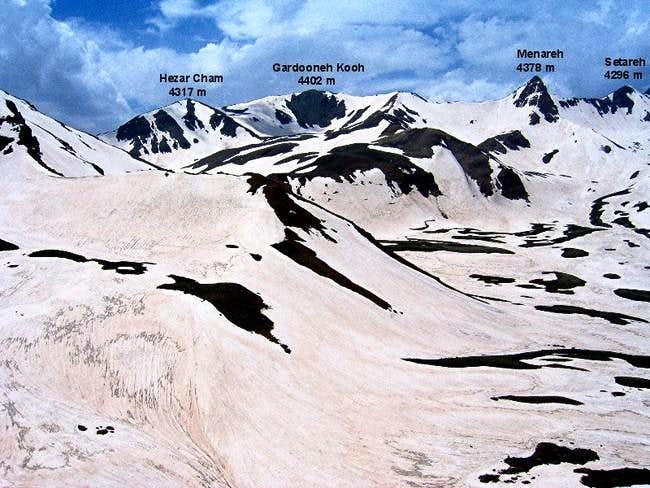 In summer, the weather is generally clear. Unexpected thunderstorms do occur frequently. Precipitation at higher elevations will almost always be in the form of snow/hail. 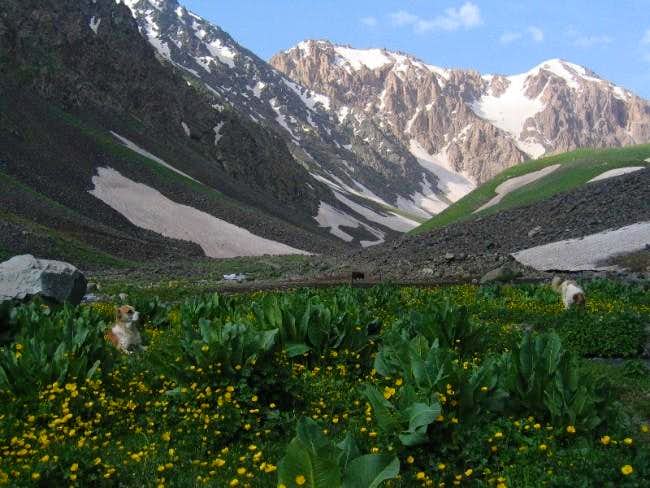 
MAPS:
1) The most accurate topographical maps of the area are those with a scale of 1:50 000 (contour lines of 20 m) provided by the Iranian Armed Forces. You will need sheet #6162 I "Shahrestanak" for Gardooneh Kooh and Alam Kooh (To fully cover the entire Takhte Soleyman Massif, you will also need sheet #6262 IV "Rudbarak"). These maps are available in Tehran at the Geographical Office of the Armed Forces on Moalem St. (98 21 8408088) for the equivalent of $3 per sheet (in 2004). Outside of Iran, the same maps can be purchased at www.cartographic.com for the exorbitant price of $150 per sheet (in 2003). These maps are in Farsi. While they give the exact elevation of most of the peaks, they do not give the names of the individual peaks.