Chikamin and Lemah Peaks at dusk from Spectacle Lake

Chikamin Peak is the first Cascade mountain north of Mount Rainier to reach over 7000 feet in elevation. It is also the highest peak of what many regard as the Snoqualmie Pass Peaks (those peaks easily accessible from Snoqualmie Pass in a day). The view of Chikamin Peak is quite impressive while driving on I-90 east of Snoqualmie Pass and looking north up Gold Creek Valley. From this vantage point, Chikamin appears as a rock horn sitting on top of a ridge whose southern face is a near-vertical wall. Appearances are deceiving. The Pacific Crest Trail (PCT) crosses this face, which consists of numerous gullies which can be used to gain access to Chikamin's summit.

Accordingly, Chikamin Peak can be accessed from a variety of approaches. The shortest approach and the only route feasible as a day trip is by way of Mineral Creek Park (about 7 miles each way), although this is a very rough trail and will feel much longer. Chikamin can alternatively be reached via the PCT from Snoqualmie Pass and via the Cooper River trail from the east. Both of these latter approaches are about 14 miles each way, however, and are impractical as a day trip.

This will be some of the finest country you will ever encounter. Chikamin is in the heart of the Alpine Lakes Wilderness, and is surrounded by some of the most beautiful lakes and rugged peaks anywhere in the Northwest. This mountain, whether done as an overnighter, or in a day, is a real gem. From its summit, you will have great views of Thompson, Lemah, Hinman, Daniel, and other great peaks of the Alpine Lakes Wilderness area.

Getting There: Mineral Creek Park

Traversing to the north of Chikamin, looking down on Chikamin Lake.

The Four Brothers above Glacier Lake. Be sure to hit Chikamin Ridge to the North of this formation.

Drive I-90 to Exit 80 (Salmon La Sac exit). Take a left off of the ramp and head through the towns of Roslyn and Ronald. After driving 15 miles, take a left from the Cle Elum River Road onto the Cooper River road #46 and drive 4.7 miles to the Cooper River Junction. Turn right onto the Cooper Lake Road #4616. At Cooper Lake, keep left at Road #4600 and climb over Cooper Pass. At about 11 miles from the Cle Elum River Road, find the trailhead, elevation 2400 feet.

Hike good trail at first, making a difficult stream crossing in about 2 miles. Once past the creek crossing, the trail becomes rocky and rough, and you will never really be able to see your boots due to all of the thick undergrowth which surrounds both sides of the trail. At 4 miles, finally break into forest and leave the rough trail behind. At 5 miles, reach Upper Park Lake, elevation 4700 feet.

From Upper Park Lake, continue on the Mineral Creek Park trail to a junction with the PCT in about 1/2 mile. Turn left (south) at the junction, and reach Chikamin Pass in another 1/2 mile.

From this point, two options are possible. Just about 1/4 mile before reaching Chikamin Pass, you will pass an unmarked but very well defined trail heading off to your right. If you follow this trail, it will take you cross-country to Glacier Lake, one of the truly spectacular settings in all of the Cascades. Unfortunately, you will also be losing about 600 feet in the process. The view of Chikamin from Glacier Lake is amazing. Hike along the right side (due to the cliffs of Chikamin Ridge, it will be impossible to hike up the left side) of the lake up a draw to the top of the cliffs surrounding Glacier Lake. At this point, it is imperative to turn left (west) over broken talus and slabs and traverse to the top of Chikamin Ridge. If you make the mistake of continuing up the draw, you will be prevented from reaching Chikamin by a huge cliff.

Once on top of Chikamin Ridge, it is an easy Class 2 scramble up a broad gully to the summit horn, where a narrower gully and a short Class 3 scramble will take you to the summit.

If you choose not to go to Glacier Lake, you can take the PCT south from Chikamin Pass about 1/3 mile, where very steep grassy slopes will eventually lead you to any number of gully systems that will reach the top of Chikamin Ridge. Be sure to go at least 1/3 mile south of the pass, as if you ascend Chikamin Ridge near Chikamin Pass, you will be doing so in the middle of the Four Brothers, four cliffy points which will present very difficult (and technical) obstacles on reaching Chikamin Peak.

Getting There: From Snoqualmie Pass

Chikamin from the PCT

Chikamin from the PCT at Chikamin Pass

From Snoqualmie Pass, climbing Chikamin Peak via the PCT in a day is not feasible for mere mortals. Drive I-90 52 miles east of Seattle, exiting at Exit 52 (Snoqualmie Summit). Take a left at the ramp and go under the freeway, finding the PCT access road almost immediatley after passing under I-90. Park at the PCT trailhead, elevation 3000 feet.

Hike the PCT 5.5 miles to the Kendall Katwalk and beyond. At around 9 miles, you will need to lose 600 feet near Joe Lake, regaining those feet under Huckleberry Mountain. Pass under Huckleberry Mountain as the trail levels off at the Huckleberry-Chikamin Saddle (10.25 miles from Snoqualmie Pass).  At 13.5 miles from Snoqualmie Pass and 1/2 mile before Chikamin Pass, find the grassy slopes and gullies that one can access to the summit ridge, and complete the climb as described above.

Distance: 28 miles round trip: Difficulty: Class 2-3. Elevation Gain: Over 5000 feet with lots of ups and downs.

Getting There: Cooper River Trail

Looking down Chikamin Ridge from near the summit

Chikamin from the top of Chikamin Ridge

Drive I-90 to Exit 80 (Salmon La Sac exit). Take a left off of the ramp and head through the towns of Roslyn and Ronald. After driving 15 miles, take a left from the Cle Elum River Road onto the Cooper River road #46 and drive 4.7 miles to the Cooper River Junction. Turn right onto the Cooper Lake Road #4616. Turn left onto Road #113 a fnal mile to the trailhead, elevation 2800 feet.

Hike the Cooper River trail a flat five miles to Pete Lake. From Pete Lake, continue another two miles, crossing two creeks. Beyond these creeks, join the PCT. Continue south on the PCT for two miles, finding the steep access trail to Spectacle Lake. While only 1/2 mile in length, this trail is mighty steep, gaining access to the outlet of Spectacle Lake. Continue along the very difficult southwest (left) shore of Spectacle Lake, reaching a stream going into Spectacle Lake. This creek is coming from Glacier Lake. Follow this creek uphill through not-too-difficult open forest to reach Glacier Lake (no established trail). Ascend Chikamin via Chikamin Ridge as described above.

Owing to the length of the approach, a day climb is only feasible from early to mid-July through late October. A strong snowshoeing party with good navigational skills could conceivably make the climb in winter, although 26 miles of deep snow on slide-prone slopes are probably prohibitive.

Chikamin Peak lies within the Alpine Lakes Wilderness. Self-service permits are required and available at all trailheads. Northwest Trail Parking Pass ($5/daily, $30/year) is required to park at any of the trailheads. You can also obtain an interagency pass which is good at all Forest Service trailheads and US National Parks ($80/year).

Any approach on Chikamin Peak offers amazing camping possibilites. From Mineral Creek Park, camping is possible at Upper Park Lakes. From the PCT, camping is available at Ridge Lake. From Cooper River, camping is fantastic and spectacular at the aptly named Spectacle Lake. No permits other than the Wilderness permit are required to camp. Be aware that, due to the preponderance of lakes and standing water, this area is renowned for mosquitos. Bring a tent and lots and lots of DEET. Don't rely on a tarp on this one. You'll be eaten alive, especially near at the stream crossings after Pete Lake. 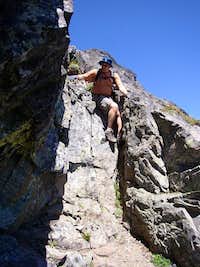 Also, webcams are available from the Washington State Department of Transportation at:
Snoqualmie Pass Web Cam