The area of Súľovské skaly sits in the vicinity of Žilina, which is very easily accessible from every corner of Slovakia by highway or railroad. From Žilina, head for Bytča, where you turn left in the direction of Súľov (8-10 km from the main road; 15 minutes by bus from the railway station).

The Sulov conglomerate can be compared to concrete (in fact, it is kind of limestone) dotted with stones of various size and holes where the stones have dropped out. Rock climbers marvel at the excellent friction, characteristic of these crags. Nearly all of the routes are bolted, the typical length is 20 to 40 meters (there are also routes which have a length of 10 or 50 meters).

As the beginning of climbing in Súľovské skaly one can consider the time of World War II. The first climbers were German soldiers who made a route to the summit of Brada. Other routes were created on Mních, Sokolia veža, Veža nad Ohniskom, Budkova veža, Jazdec etc. By the 1960's, all the major towers, needles and chimneys had been climbed and Súľovské skaly were largely abandoned. In the 1970's Súľovské skaly were re-discovered by the local climbers. The next generation started using different techniques and protection and more difficult routes were made. In the beginning of 1990's, climbing reached the UIAA grade X- (10-) in terms of difficulty.

There are two main climbing areas, located near each other, about three quarters of an hour's walk from Súľov via the red trail and Lúka pod hradom (Meadow under the Castle): Javor and Hrad. 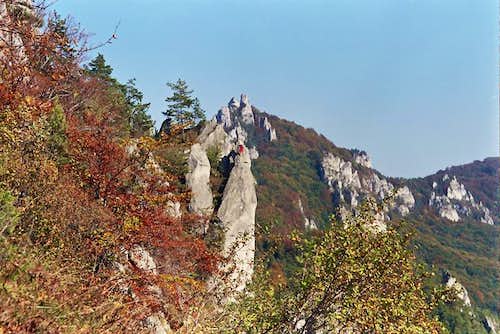 Just past Rapsódia v modrom, Brada in the background - photo by Bocian

! In order to protect endangered bird species, such as falcons and the black stork, rock climbing in the area of Brada – possible until quite recently - has been banned. Not all routes listed below may currently be available. Also, the number of routes one is allowed to climb is always much bigger throughout the second half of the year. (Please see the Red Tape chapter.)

Some of the Routes (and UIAA grades):

Talking of the non-technical, hiking objectives, the route not to be missed is the following (see the online map in the Maps chapter):

Gorge of the Hradnianka-Lúka pod hradom (green marks, 1.25 h):
The (interpretive) trail leads past the 13-meter-tall Gothic Gate, then climbs to the summit of Hrad, where a medieval castle stood of which hardly anything has survived to this day. (There are several interesting, better preserved constructions, on hilltops around Súľovské vrchy, such as Lietava or Považský castles.) The summit offers an interesting, westerly view of the narrow ridge, beyond the Hradnianka gorge, towards the Strážovské vrchy proper. The easterly view is pretty as well. 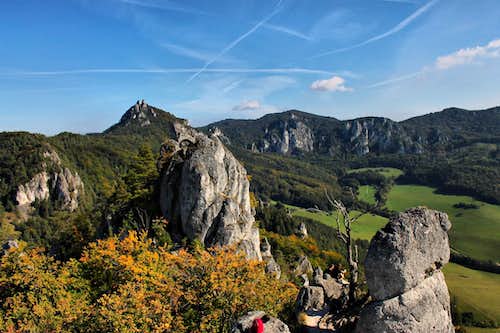 On the summit of Hrad: Looking east.

then
Lúka pod hradom-Brada-Roháč (red marks, 1.25 h):
Lúka pod hradom is a little clearing from which the red marks run through the forest to excellent vantage points, such as Stefanikova vyhliadka on the edge of the cliff under the summit crag of Brada, inaccessible for the hiker. The next vantage points offering views like that will be found near the summit of Roháč. Brada and Roháč rise just above 800 meters a.s.l., which – considering the village of Súľov sits at about 400 m – gives the net elevation gain of a little more than 400 m. In fact, the top of Roháč does not have much to offer so instead of climbing it, it may be a better idea to pick the green marks at the Roháč-Čiakov Saddle before Roháč, so as to continue along the cliff at least to the next vantage point nearby (or perhaps even as far as the pass named Sedlo pod Roháčom, where there is a modest cross by the trail and several rows of benches in front of it, and an excellent view point close to it). Anyhow, so as not to miss some of the key karst wonders, you turn back to Roháč-Čiakov

then descend
Roháč-Súľov (yellow marks, 1.5 h):
From the intersection of the trails at the pass called Roháč-Ciakov follow the yellow marks heading downslope south-west, back into the basin of Súľov. On the way there will be really interesting rock formations, including the largest of Súľov's "gates", namely Obrovská brana. After nearly half an hour's descent, there is a cul-de-sac leading to a cave called Šarkania diera (Dragon's Hole).

Altogether: 4-4.5 hours
The Arches known as the Gates
The Slovak word brána translates as "gate". Of the Sulov gates Obrovská brána (literally the Huge Gate) is the largest whereas Goticka brána is both the tallest (13m) and the most popular.


Below you will find the basics about the waymarked trails running out of the village of Súľov.

The area this pages focuses on lies within a nature reserve in which you are only allowed to walk along the marked trails.

Rock climbing is for members of UIAA only, and it is restricted to a few areas. The number of routes available can be disappointing unless you come in the second half of the year. Compare these two maps from 2008 (outdated - valid lists below) for the Hrad and Javor areas:
Drytooling, climbing at and after dusk and bivouacking are forbidden. Chalk, nuts and cams are OK.


Unfortunately, the guidebook is out of print and is no longer available in the shops. Here are some topos from a Slovak climbing association. You will also find the basics about most of the routes painted on the wall at the base of the crag.

online map on hiking.sk
A paper map can be purchased online or practically anywhere in Slovakia.

In Súľov, there is a campsite and a range of guesthouses to choose from, and there are many more options in the neighborhoods, for example in the valley of Rajčanka which you will definitely like to visit/stay in if you like swimming. In the valley there is the old spa of Rajecké Teplice but the town of Rajec has a much better, less crowded swimming pool inside a little water park, built a few years ago and named Veronika.(However, although it sits just 10 km SE of Súľov, you will have to drive nearly an hour to get there, so it seems that going by bike may be more fun.)


Images On Other Websites