East from the Bucegi Mountains, in the Carpathian Bend, part of the Eastern Carpathians, extends a series of lower mountain ranges, none of which rises over 2,000m. Their ridgelines are rather monotonous, wavy or undulating, covered with either woods or pastures. The borders between particular ranges, some of which are known under more than one name, are far from obvious. The Ciucaş Mountains stand out from their surroundings in that they are a few hundred metres higher and boast spectacular, peculiar rock formations, thus resembling a medieval fortress. These mountains sit between the Grohotiş Mountains in the southwest and the Siriu Mountains in the east. From the north they are bounded by the Întorsurii Mountains. The Ciucaş Mountains embrace the Tesla and Dungu massifs, situated west and northwest, respectively, of Vf. Ciucaş, i.e. Ciucaş Peak.

The highpoint of the Ciucaş Mountains has the same name as the mountain range. At 1954m, it stands near the north end of the Bratocea Ridge, which runs from the southwest, from the pass named Bratocea (the national road Braşov-Cheia). The Bratocea Ridge forms the western part of the main ridge of the Ciucaş Mountains. At Ciucaş Peak what is thought to be the main ridge takes a sharp turn right, drops a couple of hundred metres and runs ESE to connect to the other, eastern part of the main ridge, which is called Zăganu. 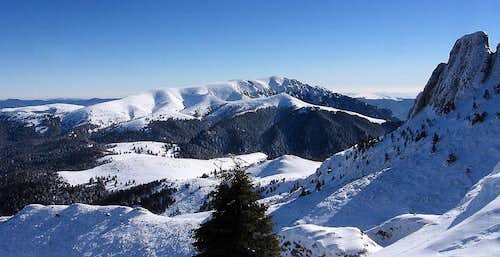 Junction between Bratocea and Zăganu (background) ridges, Ciucaş Hut to its right

The Zăganu Ridge, whose highest summit is Gropşoare at 1883m, runs from NNW to SSE. From its north stretch it sends a remarkable lateral ridge to the southwest, known as Muntele Roşu (1765m), whose extension reaches the resort of Cheia. 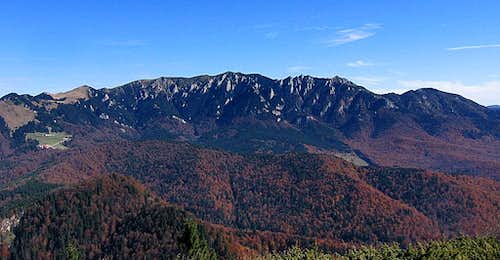 The bizarre, unique shapes of the groups of rock formations are the hallmark of the Ciucaş Mountains. The association of towers, needles, sugar loaves, mushrooms, anthropomorphic and zoomorphic rocks, etc. is a result of differential weathering of the rock material they are formed of, namely Zăganu-Ceahlău conglomerate, which is a type of sedimentary rock that consists of plethora of boulders and pebbles embedded in sandstone or calcareous matrix. The rock formations carved in the conglomerate tend to have characteristic, rounded tops, whereas the sharper spires and cliff edges can indicate limestone rather than conglomerate. All landforms are undergoing a relatively rapid evolution due to the harsh mountain climate.

The table below lists the highest summits and the most spectacular rock formations.

The Ciucaş Mountains, covering an area of just 200 square km, present an extraordinarily rich relief. This wonder of nature is a paradise for trekkers, also for those who prefer winter adventures, day hikers, photographers, for anyone inclined to marvel at pretty wild, fairy scenery. 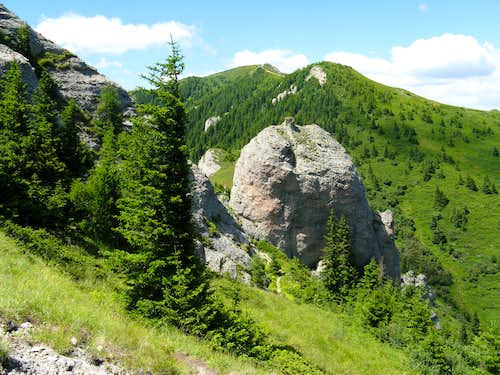 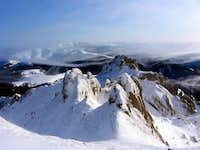 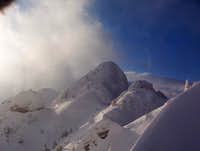 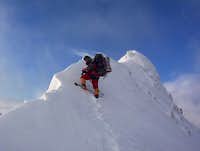 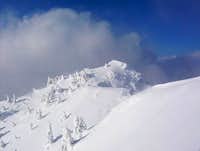 While in summer the loop over the main ridge Cheia-Zăganu-Gropşoarele-Ciucaş Hut-Ciucaş Peak-Bratocea-Cheia can be covered (without a heavy pack) within one long day, in winter it requires two full days. Only experienced mountaineers can walk along the main ridge. This route can be divided like this: - Cheia-Zaganu Ridge-Ciucaş Hut or Ţigăile Mari Pass - Ciucaş Hut-Ciucaş Peak-Bratocea ridge-national road 1A route (Pasul Bratocea to Cheia) The most difficult part of the route is the Zăganu Ridge but all route is difficult because of the snow, navigation problems (attention on foggy days) and long distances. In some winters the wind blows at 130km/h. Equipment required: ice axe, crampons, ski poles, solid tent, winter gear, winter boots (plastic type for example). Skis could be very useful on the non-rocky parts of the ridge. The most used bivouac places are: - sheepfold called Zăganu - just below the summit of Gropşoarele - Şaua Chiruşca (Chiruşca Pass) - the Ciucaş Hut - sheepfold called Bratocea You can also descend to the Muntele Roşu Hut at the end of the first day and ascend the ridge back in the morning of the second day. But it will take extra 2h (descent) plus 3h (ascent). Avalanches occur just below the Zăganu Ridge (from the sheepfold to the ridge) and in all of the zone below the summit of Ciucaş and along the Bratocea ridge. List of rock climbing routes and detailed info

The village of Cheia at the foot of the Ciucaş Mountains can be accessed from the city of Braşov via Săcele or from the south, from Bucharest via Ploieşti and Valenii de Munte (DN, i.e. national road, 1A).

The Muntele Roşu Hut is accessible by formerly asphalted road (this 3.3 km road is in VERY bad condition!)which forks 1 km off Cheia village (the overall distance from Cheia to Muntele Roşu Hut is 7,7 km). Vama Buzăului offering access from the north is connected with Întorsura Buzăului, which is a town accessible from Braşov (national road 10) There is no railroad connection with the nearby villages. The closest major railway stations are in Braşov and Ploieşti. The closest minor railway stations are in Dârste, Măneciu and Întorsura Buzăului. You can arrive by car or by bus. Unfortunately, there is no bus connection from Braşov to Cheia. Timetable in direction Sacele - Brasov. (You should add 30 min. to the departure hours given in the table, to find out the departure hours from Brașov (Poienelor). There are buses from Sacele to Bradet: Mo - Fr at 7:30 a. m. Sa - Su at 8:00 a. m.

Virtualy none. You may pitch the tent everywhere, although the Ciucaş Massif boasts a few nature reserves remarkable for their landscape and unique features: 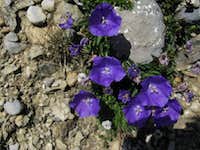 In Cheia a range of hotels and guesthouses. Three mountain huts:

1. The German name is Krähenstein (DE): http://www.ebay.de/itm/AK-Siebenbuergische-Karpathen-Kraehenstein-Jaenner-1917-/310896367621?clk_rvr_id=635837796177&nma=true&si=WMNnl5YqfHF50U67mPp8vVnIl50%253D&orig_cvip=true&rt=nc&_trksid=p2047675.l2557 2. Best online free downloadable resources (Guidebook - Romanian - 2 vols. & Map): https://sites.google.com/site/romanianatura7/home/carpatii-meridionali/ciucas/ghid-muntii-ciucas 3. Latest (2009) paper 1:30 000 map: http://www.himalaya.ro/en/produs/harta-muntii-ciucas-belalpin--1292/ 4. The distance from Cheia to Muntele Rosu hut is 7.7 km: 4.4 km on DN 1A and 3.3 km on a road that WAS asphalted (this 3.3 km road is VERY bad now!): http://www.jeka.ro/Distanta-Cheia_Muntele%20rosu.aspx 5. There are buses from Brașov (Poienelor) to Săcele (Garaj): http://autobuze.blogspot.ro/p/sacele.html You should add 30 min. to the departure hours given in the table, to find out the departure hours from Brașov (Poienelor). 6. The closest railway stations are in Dârste, Măneciu and Întorsura Buzăului. 7. Best weather forecast for Ciucaș: http://freemeteo.ro/weather/ciucas/7-days/list/?gid=681487&language=english&country=romania 8. Babarunca on the national road 1A Braşov-Cheia, at 908 m.

ad1. Are you sure? http://de.wikipedia.org/wiki/Krähenstein Please have a look here:http://www.mountex.sk/produkt/80101-065-0/_konigstein_-_bucegi_-_schuller_grossstein_-_tschukasch But your contribution is very precious. I´ve submitted it as an External link... ad2. Thanks a lot for these extremely interesting links. Are you able to translate the most important infos? It would be great:D BTW: I didn't know about Capatini de Zahar - a peculiar needle, part of Tigaile Mari... ad3. Now have a look at Chapter 2 (also very precious contribution) ad4. Added. ad5. Link to this timetable submitted. ad6. Done. ad7. Added. ad8. Repaired Thanks a million for your great effort in improving this page. Please, check it again... Salut!

1. Look here, official newspaper of german minority in RO: http://www.adz.ro/artikel/artikel/wandern-der-kraehenstein/ 2. It's huge information to transate from here: https://sites.google.com/site/romanianatura7/home/carpatii-meridionali/ciucas/ghid-muntii-ciucas (By the way - The link provided by You in the article has an error!) My english is quite poor. If You really need some information to be translated, please try to be more specific. Thanx! 3. More information about 1:30 000 BEL ALPIN map: http://www.karpatia.ro/ (search: ciucas)