While not identified by the Board of Geographic Names, the Mount Sneffels massif and its satellite peaks as viewed from highways 62 and 145 are often referred to locally and abroad as the "Sneffels Range". For objective purposes, the scope of the range has been defined here using key saddles as the criteria to determine range boundaries. Thus, the range is here defined as the continuous area higher than and west of Red Mountain Pass (Mount Sneffels' saddle) and north of Ophir Pass (Vermilion Peak's saddle). Mount Sneffels at 14,150' is 27th highest in the state, is the highest peak in Ouray County.

Mount Sneffels is also the parent peak of San Juan County's highest, Vermilion Peak 13,894', to the south. Three of Colorado's highest 100 ranked peaks are included in this range, two of them being technical (easy 5th class). The range is host to 37 ranked 13ers (peaks with at least 300' rise), with a select few "easy" hikes. The opportunities for scrambling and hiking in the area are exceptional and views on clear days are always top-notch.

Due to its composition, most of the rock in the area is very rotten and many approaches involve extremely loose scree traverses (approaches to Mears Peak and Teakettle Mountain among the worst). The rock is often very colorful and the high mineral content also influences the color of the lakes in the area, such as the famous Blue Lakes. The northern flank of the range on the west side of Mount Sneffels contains several peaks named with the prefix "S " followed by an ascending number from southeast to northwest, ending with "S 10". The "S" represents an abbreviation for "Sneffels". Similarly, peaks flanking the east side Telluride have a prefix "T ", starting with "T 0" and ending with "T 11" going north to south, where the "T" represents an abbreviation for "Telluride".

Fall Color in the Sneffels Range - photo by yorksman

"S 4" may challenge your notion of loose rock sidehilling.

Nice views to be had in any direction - Gilpin Peak and Blocktops from "S 4".

Colorful approach to "S 5" from the east.

Flora
The San Juan Range is host to an amazing variety and quantity of alpine wildflowers, proliferating high basins between July and August. The Sneffels Range in particular is lined with vast fields of flowers that often compete for attention with the incredible peaks in the area.

Stunning Saint Sophia Ridge is a chossy approach followed by easiest route of 5.7 - photo by RyanS

At least four peaks in the Sneffels Range require 5th class moves to reach the summit, the most popular being the two centennial 13ers Dallas Peak and Teakettle Mountain. "Coffeepot" serves as a nice companion piece to a climb of Teakettle. Seldom visited, gendarme-infested Saint Sophia Ridge (South Ridge of Mount Emma) is the most difficult summit to reach listed here. Mount Sneffels itself has several 5th class possibilities, including the Snake Couloir. Several variations also exist for a more difficult ascent Dallas Peak.

For infomation on Dallas Peak, see this page

For infomation on Teakettle Mountain, see this page

For infomation on "Coffeepot", see this page

For infomation on Mount Sneffels, see this page

For brief information on Saint Sophia Ridge, see this page 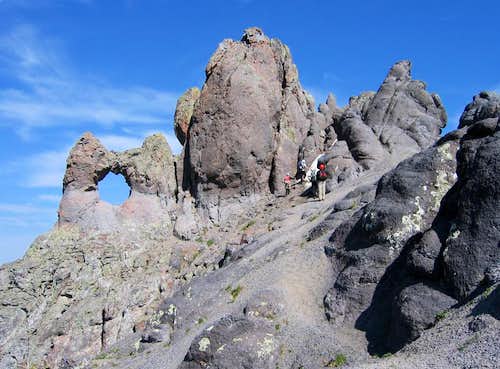 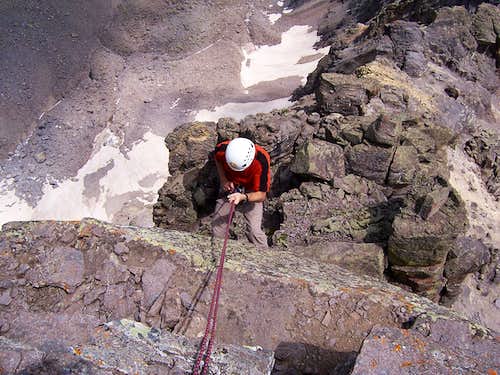 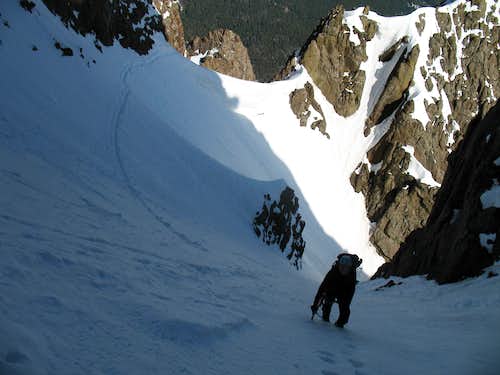 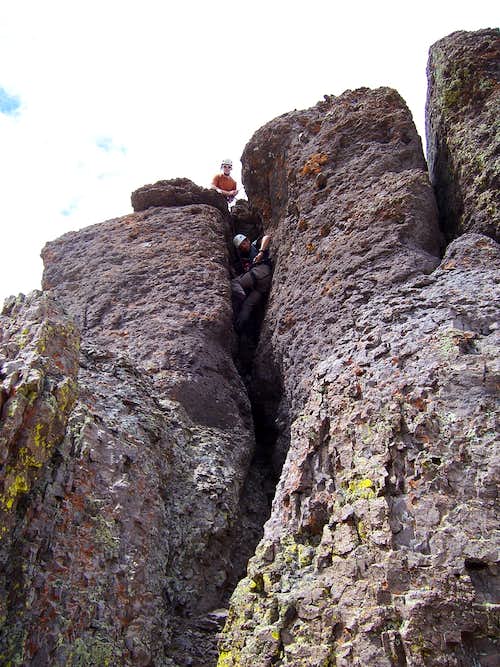 Stemming up the chimney on "Coffeepot" - photo by skasgaard

Three popular towns are situated near the Sneffels Range: Ouray, Telluride, and Ridgway. These are best accessed using highway 550 from Montrose (or Durango if approaching from the south). Ouray is famous for its ice climbing and sits in a valley very similar to towns of Switzerland, and thus carries the nickname "Switzerland of America". There are many places to stay in Ouray, and like Silverton, retains the qualities of a quaint an old mining town. Ouray provides great access to Yankee Boy Basin (often used for Sneffels, Teakettle, Potosi, Whitehouse, Corbett, Gilpin, Emma) and Blue Lakes Basin (used for "T 0", "S 4", "S 5" and "S 6", as well as Sneffels).

Red Mountain Pass is another access point used for the eastern portion of the range south of Imogene Pass. Telluride is more famous for its skiing, and real estate has the prices to prove it. Telluride also retains a mining town feel to a lesser extent. Telluride provides a great access point for the northern flanks of the range west of Sneffels, including Mears, and "S 7" through "S 10" as well as the southern end of the range including Wasatch Peak, La Junta Peak, and Silver Mountain B. Ridgway is a bit further north than Ouray, and thus further from the range, but offers nice camping nearby.

The San Juan Range in general and particularly the Sneffels range melt out late.
Current Snowpack