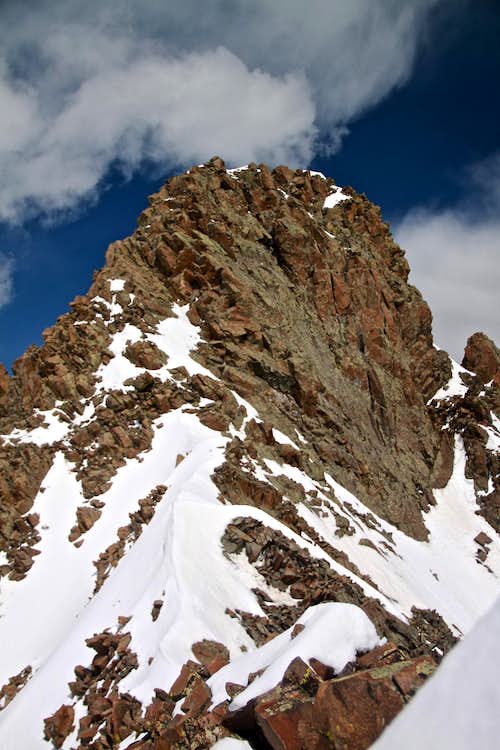 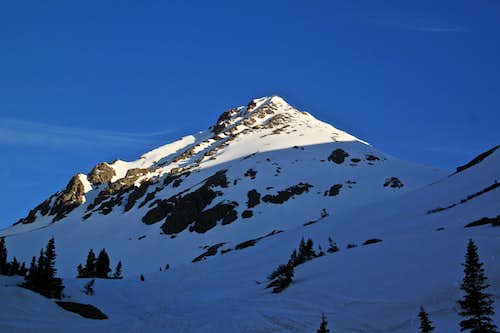 Kismet as seen from the approach to Yankee Boy Basin
Kismet is an unranked 13er located in Yankee Boy Basin. It is a rarely climbed peak, and the actual highest point is hard to identify unless you know where to go. (The true summit is not visible from Yankee Boy Basin).
Kismet is more like a cluster of points with very loose rock, several deep couloirs, and tons of scree (very loose scree).
When approaching Yankee Boy Basin, Kismet comes nicely into a view (see photo on the right) and many people confuse it with Mt. Sneffels, which is hiding behind this peak. Nowadays, there is a nice trail leading towards Sneffels, and people have guidebooks, on-line information, so the confusion does not happen + Kismet has nasty looking scree and does not look very inviting after the snow melt.
Unranked Peak - the most widely accepted rule for whether a peak is ranked or unranked is the "300 foot" rule. Under 300 foot rule a peak or mountain must rise at least 300 feet above the saddle that connects the peak or mountain to its closest higher neighboring peak to be an official peak.
Kismet is separated from Mt. Sneffels to the west by Scree Col (Lavender) Col and Cirque Mountain to the east by Dike Col. Dyke Col is 13,060 feet only, but Lavender Col is 13,500 feet. Still I believe the peak is complicated especially when approached from Lavender Col, it should deserve more considerations.

My personal experiences with Kismet

My first attempt: we started from the Lavender Col (the Col between Mt. Sneffels and Kismet), which was a wrong choice. We scrambled around, and by the time we figured out our way, we had to leave. (we were rushing for a wedding in Montrose that evening). Participants: Duchess, my boss from work Tom Wiard and Michael Covington. Basically the route to Lavender Col is easy, well traveled path which most people take to summit Mt. Sneffels, even reaching the first few points of Kismet is easy, but then to get over to the main summit, you have to down climb several gullies filled with very loose scree. I would not recommend this approach. The views of climbers on Mt. Sneffels from here are amazing.

My 2nd attempt was to ski this peak since the scree is pretty bad. But we chose the wrong snow couloir and by the time we reached the top, it was too late to change. The snow became too soft, and we were burying our legs up to our thighs in a deep wet snow when trying to cross over. We were also running out of time for prime conditions to ski the couloir. We could cross over on some corniced thin ridge towards the highest point and then climb, but skiing became priority number one at that moment. The couloir we took up is a relatively wide one starting straight up from Mt. Sneffels Wilderness sign. Do not underestimate this peak (much more difficult compared to neighboring fourteener Mt. Sneffels.) Participants: Dan There is a more narrow and steeper couloir west from the one we skied, that one would take you directly below the main summit block.

Guide to the Colorado Mountains does not give much description. Kismet is the cluster of points directly north of Wrights Lake and 0.5 miles east-southeast of Sneffels on the range crest. From the top of Dyke Col, climb west over and around a couple of false summits to the base of the main needle. The SJM (=San Juan Mountaineers) also suggested a route straight north from Wrights Lake, directly to the southeast side of the summit. There is a likelihood of rope protection being needed on top.
This is copied from the above book. I believe that the route from Dyke Col is very complicated one. I have been to Dyke Col, and up to that point it is very easy, but going over the "couple of false summits" requires a lot of exposure on a very loose rock.
Third time is the charm. I went up directly from Wright's Lake, past the informative Mt. Wilderness signs. Lake was still covered with snow and not obvious at all. I left ski low down since the snow was covered with ice blocks and did not look very appealing for skiing. The snow was iced up and crampons needed (brought only very lightweight aluminum ones, strap on ones - not good for final rock climbing section). The summit block offered more challenge that I was hoping for, perhaps my solitude made me more cautious, the exposure. I found an internet description claiming 5.2 route, other people say fourth class. The San Juan Mountains by Robert Rosebrough shows a picture of guys giving each other a shoulder stand to get up there. Anyway, I removed my ski boots and climbed the final block in socks. Could not reach the final 3-4 feet because did not want to stand there in a deep snow just in socks. I did not explore too much around the summit block, there was a lot of snow. Views are spectacular, especially towards Gilpin Peak, Dallas Peak and far beyond.

Images from the first scramble starting from Lavender Col - not recommended