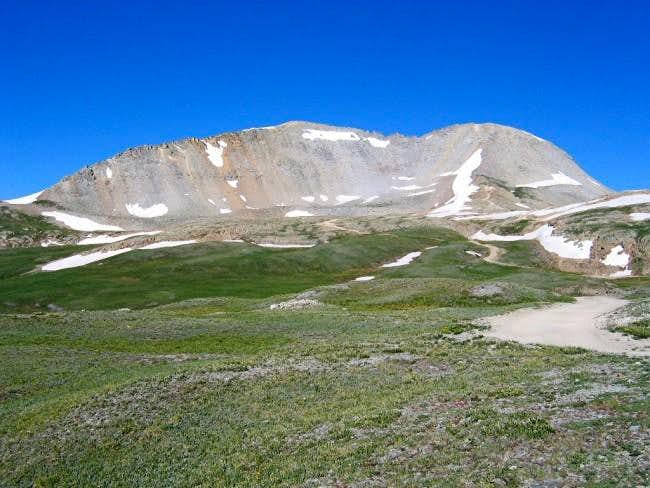 With its beautiful double summit, Peak 13477 is one of the most interesting peaks of the San Juan mountain range. Despite that, this mountain remains unnamed (it has been reffered to as T10).

The shortest way to reach the northwest summit of 13477 is via Black Bear Pass(Please note that I have not tried this route) which separates 13477 from Trico Peak (for information on Black Bear Pass Road, see Trico Peak). The southeast summit is accessed via Porphyry Gulch Road which is a rough and narrow four wheel drive road that starts on Route 550 near the Red Mountain Pass and goes up to an elevation of 12300 ft. From there, you can hike along the banks of a stream that cuts a small channel through a series of cliffs to gain access to Porphyry Basin.

Porphyry Basin is a large and fairly flat area that sits at an elevation of 12600-12800 ft. It is partly covered by what looks like "glacially smoothened rock". The rest of it is littered by countless ponds and their interconnecting streams. Three Needles and the southeast summit of 13477 loom above Porphyry Basin. With its impressive summit wall, Three Needles can probably provide excellent rock climbing opportunities.

From the summit of 13477, you will have great views of Mt. Sneffels and the jagged peaks around it as well as many other peaks of the San Juan range. Although the town of Telluride can not be seen, you will be able to see the valley in which the town is located just behind Ballard Mountain.

Peak 13477 can not be seen from route 550, however if at the Red Mountain Pass you turn east on the dirt road that goes toward Red Mountain #3 and drive a short distance (no 4WD required to this spot), you will get a spectacular view of the Double-Summit rising above a waterfall on Mineral Creek. 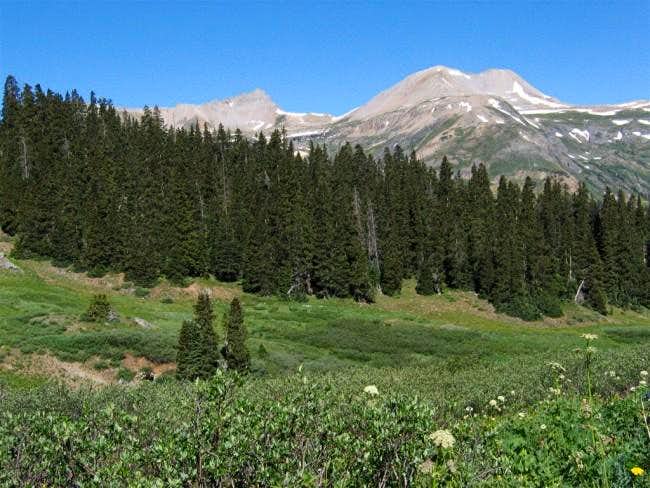 
Getting There (Porphyry Basin to southeast summit) 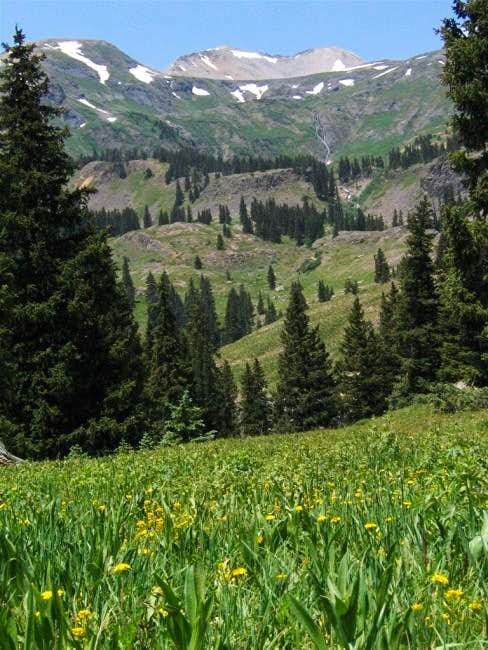 From Silverton, drive 12 miles north (or 11 miles south from Ouray) on Route 550 to the Red Mountain Pass (11018 ft). A few hundred feet south of the pass, on the west side of the road, you will see the Black Bear Pass Road. You can gain access to Porphyry Gulch Road from Black Bear Pass Road but I have not tried this route.

Continue south on Route 550 a short distance until you see a second road on the west. This is Porphyry Gulch Road (aka Bullion King Road). Turn west onto this road. Please note that Porphyry Gulch Road is a rough and narrow road that requires a Jeep or other high clearance 4WD vehicle. In some places, the road becomes very narrow and you may have a hard time passing any oncoming vehicles should you come across one (you are likely not to see anyone).

Drive Porphyry Gulch Road up a series of switchbacks through a sparse forest of Pines on grassy slopes. You will have great views of the mountains to the east of Route 550. After 1.7 miles, you will reach a connecting road on the right that goes to Black Bear Pass Road.

Continue up the main road on a sectinon of narrow shelf road with steep drop-offs. You will soon get a view of a waterfall to the left. At 2.6 miles from Route 550, the road crosses a stream. This is your trailhead (elevation 12300 ft). You can see a flattened cabin nearby. The southeast summit of 13477 will be visible to the northwest.

The road does continue a short distance from the stream. I did attempt to drive farther but the road became too scary for me. I eventually had to make a "million point U-turn"in a very narrow area to go back to the stream. Traverse between the two summits

Lodging, camping and Jeep rental available in Ouray and Silverton.

There are several really beautiful camping spots on the way to Porphyry Gulch. Nice private turn offs from the dirt road with great views of surrounding mountains and still some trees around. These are primitive undeveloped campsites, free of charge. You do need a 4WD to access these camping sites. The traverse between the both summits of T 10 has some class 3 sections. It is a nice trip to come up via the East Ridge and descend down towards the Black Bear pass.