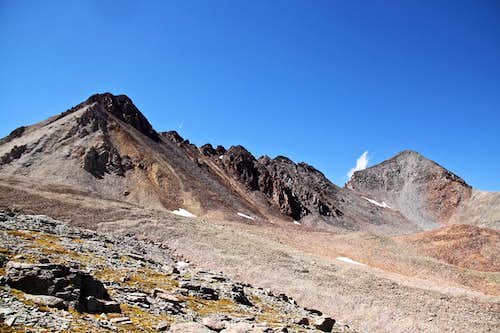 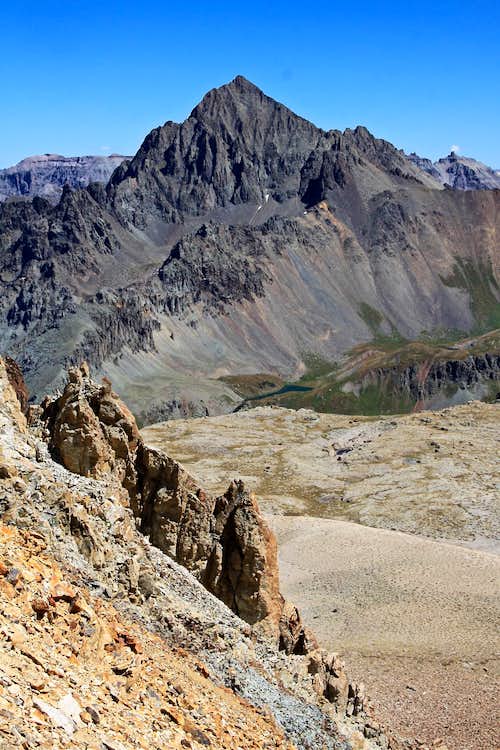 Scree slopes on S 3. Mount Sneffels in the background
S 3 or "S 3" is an unranked 13er located within Mount Sneffels Wilderness of San Juan Mountains. The peak is accessible from upper Blue Lake/East Dallas Creek. While the mountains of east Mount Sneffels range are well known and often hiked, the western peaks are more unexplored and isolated. Most of the peaks are lower 13ers and hikers completing lists of centennial and bicentennial peaks (=highest 100 and 200 in Colorado) overlook these peaks.
I chose S 3 because I wanted a solitude and also was exploring the area with the idea of scouting out new routes, e.g. West Dallas from Upper Blue Lakes (scree, scree - will wait for the snow). S 3 gave me also a great overview of routes up Mears Peak from Deep Creek Drainage, S 4 and S 5. Expect off trail hiking and a lot of scree higher up. The views of Mount Sneffels from this tour are amazing! and you get to hike the popular Blue Lakes Trail.
What is up with those names? There are many summits that have unofficial names that have sprung up because of local usage or traditional agreement in climbing community. Examples of these are some of the "T" or "S" names in San Juans. Even though these names typically do not appear on the USGS topographic maps or in other official sources, those names are used in books, websites (13ers.com and List of John) etc.
S 1 is a little protruding knob between Teakettle and Potosi Peak. It is more known under the name of Coffeepot.
S 2 is the older name of Mount Ridgway.
And the S peaks continue up to S 9.
Guide to Colorado Mountains with Robert Ormes (sort of a bible of Colorado mountains) provides only a very brief mention: "Accessible from the upper cirque 1.2 miles west of lower Blue Lake, S 3 (13,410) and S 5 (13,360) rise on the divide crest".
Nearby Peaks: 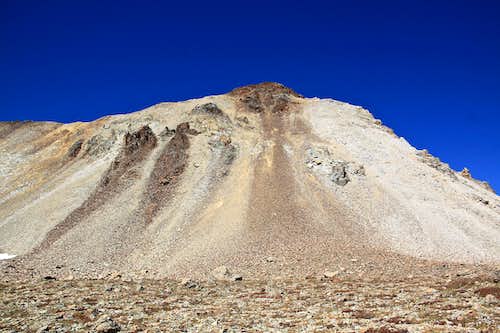 S 3 and the loose scree on its slopes 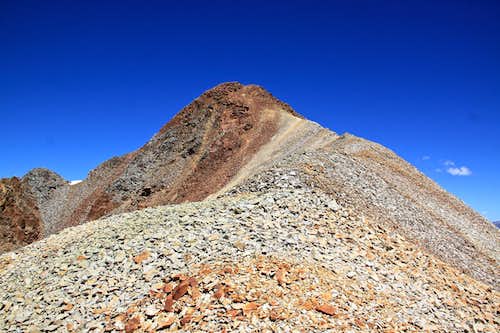 South ridge up S 3
Elevation: 13,410
Rise: 270 feet (almost a ranked peak, 300 feet is the Colorado rule)
Saddle: 13,140 feet
Parent Lineage: "T 0"
Class: 2
I ascended the loose scree between S 3 and T 0 ridge (much closer to S 3). Find the easiest path and go up. I have caused a few little rock slides since the terrain is unstable. Once you reach the ridge the walking is easy - see photo on your right.
I did not see any route which could avoid the scree.The summit had a small cairn. There was no sign in register.

There is no red tape. Hiking the popular Blue Lakes trail, camping, and exploring the area are free.
There are some prohibitions listed in Mount Sneffels Wilderness website: 1. Entering the area with more than 15 people per group and maximum combination of people and stock not to exceed 25 per group.
2. Camping within 100 feet of any lake.
3. Building a fire within 100 feet of any lake or trail and above treeline.
4. Storing equipment, personal property, or supplies for longer than 7 days. 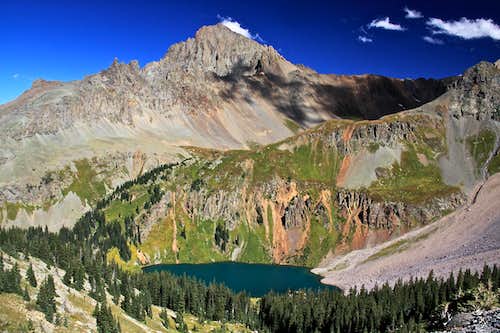 Any time is good, but the road to Blue Lakes Trailhead is closed in the winter. Summer is the easiest. Early summer may be better since the upper slopes will be covered with snow and you can snow climb instead of scree hike.

Any time is good, but the road to Blue Lakes Trailhead is closed in the winter. Summer is the easiest. Early summer may be better since the upper slopes will be covered with snow and you can snow climb instead of scree hike.