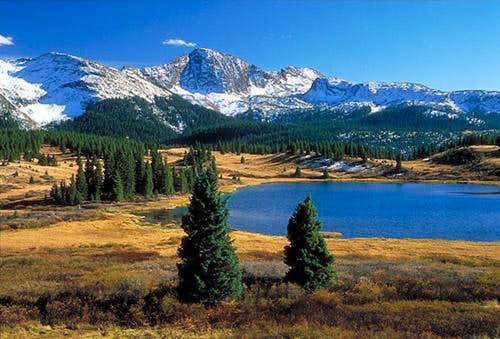 Located in the West Needles Group of the San Juan Range, less than an hour from Durango, Colorado, Snowdon Peak is a fun mountain that is very accessible and can easily be climbed in a day. Although it does not have quite the magnificent relief of its more famous neighbor to the Southwest, Engineer Mountain, Snowdon is an impressive peak that yields incredible views of the rest of the San Juans, including the remote 14ers Mount Eolus, Windom Peak, and Sunlight Mountain to the South. From the summit you can also see the beautiful town of Silverton and the Animas River Gorge, thousands of feet below the summit. Total elevation gain from the trailhead is about 2,330 feet. The easier Northeast Ridge Route involves 6.4 miles of hiking round trip, with the West Buttress route being a mile or two shorter.

Perhaps the most appealing point of Snowdon is its ease of access and proximity to Durango. The routes are easily visible from HWY 550 and can be accessed in an hour or so from the parking lot at Andrews Lake. This means that you can get an early start in Durango, head up 550 and bag the summit of Snowdon before afternoon thunderstorms become a threat, and be back in Durango enjoying nachos and beer by late afternoon.

There are two esablished routes on Snowdon, the the Northeast Ridge ,an easier third class route (see below) and the West Buttress, a more difficult third to fourth class route. There is also an inviting coloiur that cleaves the mountain below and left of its summit proper ( See "Naked Lady Couloir" Route).

Snowdon is not a talus heap like many mountains in the area, but is actually composed of fairly solid rock that yields the buttresses and "roofs" seen in the middle of the mountain below the summit. However, the routes of this mountain traverse many areas of loose rock, which is fairly typical for mountains in the San Juans.

Snowdon shares a roadhead with numerous other peaks, including the Twilight Group and West Needle Mountain, which form the popular backdrop for Purgatory/Durango Ski Resort. If you have some time in the area, a tour of Snowdon, the Twilights and Engineer is a great way to spend a few days in this beautiful area of Colorado.

A decent guide for the mountains in this area is The San Juan Moutains: a Climbing and Hiking Guide by Robert Rosebrough. Although the route descriptions are a little spartan, this guide is a great introduction to all of the classic routes in the area, particularly those not covered in the more famous guides to Coloroado's Fourteeners. 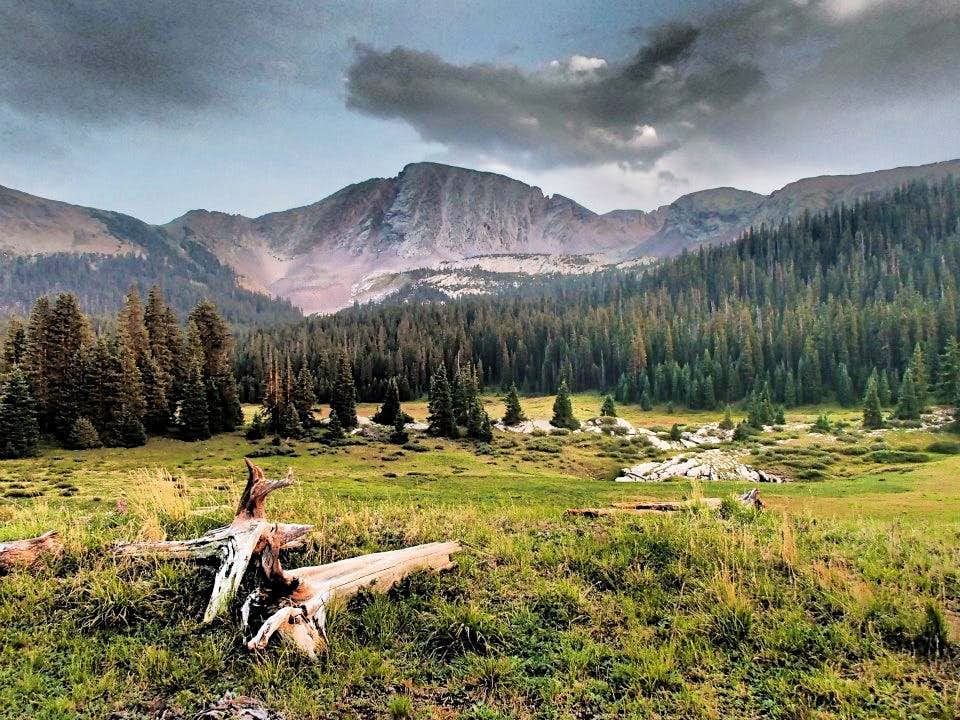 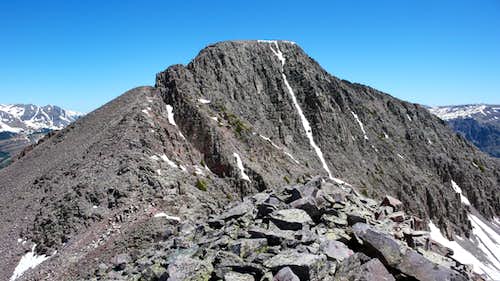 From Durango take US HWY 550 north for about forty miles to just south of Molas Pass, which is the second pass you encounter on the way from Durango to Silverton. Turn off of 550 onto the paved road to the East that heads to Andrews Lake. Follow the road for a quarter of a mile or so and park at the paved lot near the lake. Here you will find restroom facilities and a dock for fishing.

The trail starts just south of the lake. The road from 550 to Andrews Lake is impassible in winter but is used as a cross-country ski trail. If you come here during winter, park on the shoulder of 550 and follow the trail to Andrews Lake. 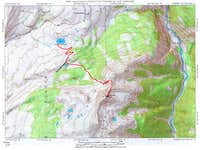 At the Andrews lake parking area, go on the trail that follows the periphery of the lake. You can go in either direction but going to the right (west/south) side of the lake may be shorter. Leave the peripheral trail and get on the trail to Crater Lake. This trail makes a number of switchbacks going up a pine forest. After 1.1 miles, you will reach a relatively flat area. Depending on the season, two ponds may be seen here. I did not see any signs but there was a well established trail that branched off of the Crater Lake Trail at a 90 degree angle. Make a left turn onto this trail. You will note a big meadow with a great view of Snowdon. 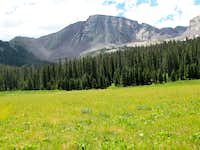 The trail crosses the meadow and goes into another growth of pine trees. You will now be close to the northwest face of Snowdon. Naked Lady Couloir will also be well visible 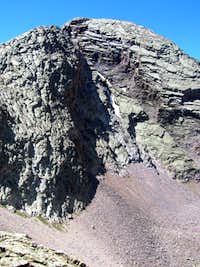 As you get near the treeline, you will note a steep grassy slope that goes up to a 12340 ft saddle between Snowdon and Point 12628 ft. The trail sometimes makes switchbacks and at other times goes directly up this steep slope.

At the 12340 ft saddle, I turned south and followed the crest of a rocky ridge over a small high point to reach a flat area at the base of the peak (To avoid hiking the crest of the rocky area, you could follow a beaten path just below the crest of the ridgeline on the west side of it). 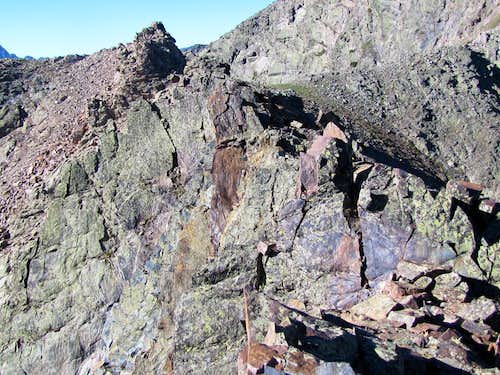 You can now hike up the rocky northeast ridgeline of Snowdon Peak.

As you get close to the summit, the going becomes more difficult. Cairns lead you to the east of the crest of the ridgeline and then up steep rocky slopes on the east side to reach the summit. There is significant exposure here but in my opinion the climbing does not exceed Class III (what may be no big deal to one person, may appear as a very difficult and dangerous climb to another, this last part is a real "climb" and not a hike, use your judgement).

The summit of Snowdon Peak is large and flat. It gives you great views of the nearby mountains. The most dramatic site in my opinion, is that of The Needles. 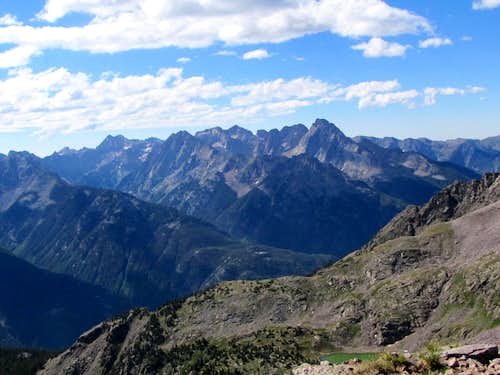 The Needles from the summit of Snowdon Peak

No permits or fees are required. Parking is usually adequate, but this can be a popular spot on weekends. 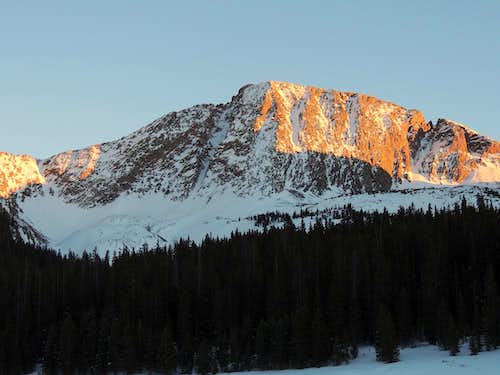 June through September are generally best. Winter and Spring ascents are possible, but be prepared for massive amounts of snow and possible avalanche danger.

As with almost any moutain in this part of the country, beware of afternoon thunderstorms that can develop in minutes and unleash a fury on you. One is very exposed to lightning on this mountain and the rock would be very slick in the rain.

An overnight stay is not necessary for this peak, especially when the bars of nearby Durango beckon. The town of Silverton, about 20 miles to the North, also has limited lodging. Nevertheless, abundant camping can be found in the area around Snowdon Peak and Engineer Peak. Camping is apparantly allowed at the trailhead. Good backcountry camping can be found in the beautiful meadow next to Crater Lake, which is situated about five miles in from the trailhead on a high, broad plateau below Snowdon Peak.

Snowdon Pk. is awesome, I climbed it as a memorial to my Father one day after he passed, on June 13th, 2004. I have lots of high 8 footage, but no pics or I would post them...
I ascended the N/W couloir, which starts out on snow at about 40 degrees. about midway up it was 50 degrees, and tops out near 60 degrees. It was really solid up high, but not quite ice, an exciting finish... I left the trailhead at 8:30, and topped out at 10:45. I downclimbed the extremely fun N/E ridge, rated third class, which I would liken to Ellingwoods S/W ridge, solid and sheer, with just a tad bit more route finding needed than Ellingwood...
There is another route (West Buttress/ 4th class) described in Rosebrough's 'Climbing Colorados San Juan Mountains', which I have not enjoyed. There are long, smooth slabs on the North side of this Buttress which overhang the N/W couloir, making it more dangerous than it is in itself. I would say that I got a later start than is advisable for my route choice, as melting snow was sliding off of these slabs landing all around, and scaring the crap out of me... I never climbed so fast... I think I shot up 800' in about 25 minutes. That's about twice my average ascent speed.
Certainly, this is one of Colorado's finest moderate peaks, with several challenging routes to choose from.

Start at the Andrew's Lake trailhead and follow the well established trail through the switchbacks into the forest south of the lake. On my way up the trail at about 1.2 miles there is a metal trailhead registration box where you take a left. If you continue without turning left you hike out to Crater Lake. Turn left at the registration box and proceed past the small ponds into the meadow and continue in a south east heading towards Snowden Peak. The trail continues into the forest and passes a waterfall just prior to getting into steeper terrain. Stay on the trail and continue past the boulder field and proceed up the steeper trail to the top of the left saddle. There is a cairn marking where you turn right to begin climbing the rocks that follow the spine of Snowden. There is a trail that is just off to the right side of the beginning of the spine that takes you to the obvious light brown dirt saddle before the hands on section. Once past the light brown saddle, continue up onto the larger Class 2 and 3 rock and work your way up on the left side of the spine. There are cairns that are fairly easy to follow up to the summit and no snow at all this date.