The Praying Monk is a feature on Camelback Mountain that has become a Phoenix icon. It is a 100-odd foot tall formation that is in the shape of a monk who is praying. It has multiple routes, and great views from the summit.

To reach the Praying Monk, drive to the Echo Canyon parking lot in Phoenix, near the intersection of 44th Street and McDonald Dr. From here turn onto McDonald, and go 100 m to a roundabout which is the parking lot entry. Parking is often a problem at the small lot here. Recently the parking lot was rebuilt but it is still constantly full.

If you cannot find parking, parking can be found in neighborhoods, and in the shopping center parking lot at 44th Street and Camelback. I like to park at the Northeast corner of 44th and Lincoln in the Barry Goldwater Memorial Park, which adds 1.2 km each way to the hike. But, be warned that police cruise the areas around the Monk, and there are lots of no-parking areas that they'd ticket you in.
Hike up the Echo canyon trail to a saddle with a bench, and then turn to the right, along a small path. There should be a wall on your left. If you hike too far you will see fences and rails, and you will be hiking under a big wall. If so, turn back.

From the base of the first wall, there are several routes. I prefer a bolted Class IV pitch, which is quickest and has the best rock (which is not saying much). There is also a 5.4 R rappel gully that one could climb, though it has no bolts until the top (hence the "R" rating). Just right of the rappel gully there is a 5.4 bolted route that others prefer. 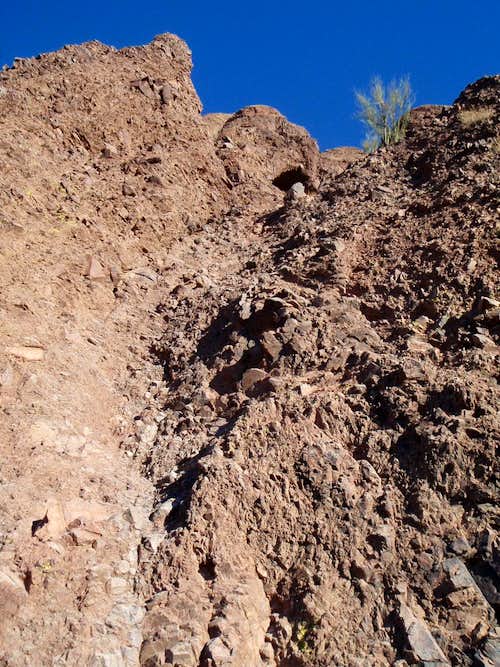 The first pitch
(For the Class IV Pitch) It can be done with a 60 meter rope. There are belay bolts at the top of the pitch, and 5 bolts before then. Quickdraws will do, but a 60 cm runner is nice. From there, walk to the base of the monk, to the SE corner. A boulder meets the monk at the South side, and the start to the best route is at this corner. It is a 5.7. The route has 6-8 bolts depending how many you wish to bolt on the corner. A runner or two is helpful, but quickdraws will suffice.
Another option to avoid the first 5.7 moves is to walk into the cave formed by the boulder leaning on the Monk. There is a ledge, and you traverse that ledge to get onto the corner of the East Face. The two routes meet, and there is a single bolt that is used only for the 5.7 route. The first step on the 5.3 route is awkward and a fall from the corner would most likely be a 20 foot ground fall. There is a 5.10 route that ascends the Monk via the South Face, and has a roof and overhang, but the author has not climbed it. 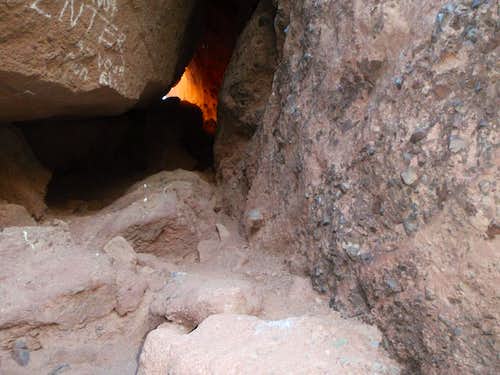 The Boulder at the start 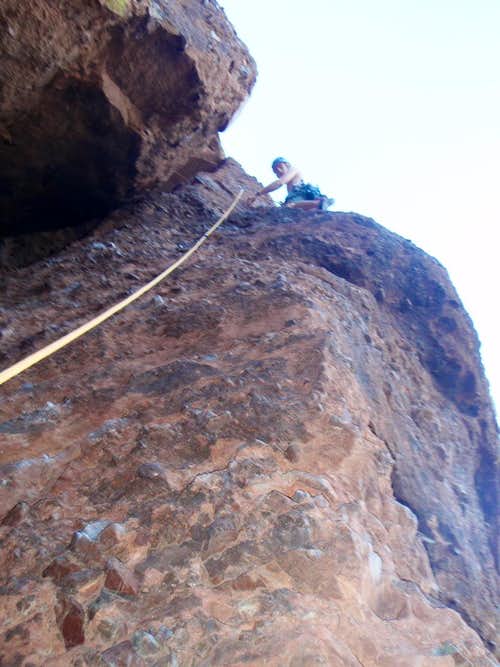 The 5.7 start
Most of the (relatively) difficult moves are at the start. Climb up, and a rappel can be done off the South face with a 60 meter rope. 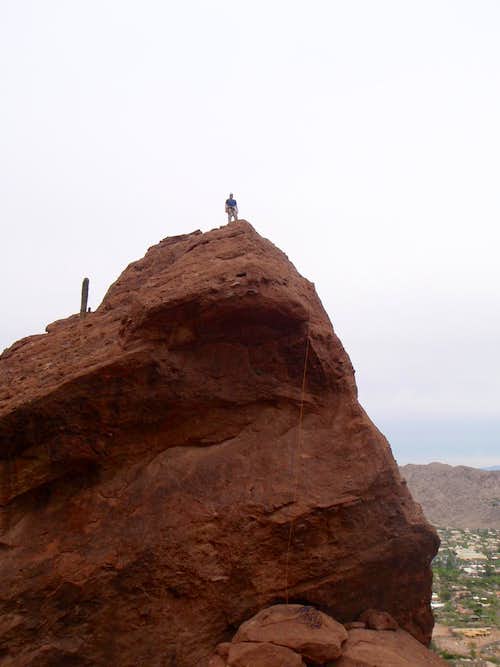 The South Face rappel
Rappel down the rappel gully, 50 feet to the right of the first pitch. 50 meter rope is enough for the rappel.

I have a couple trip reports from my blog that may be helpful as well:
https://adventuretraveling.wordpress.com/2011/11/20/third-times-the-charm/

This is a big city, so there is no real camping. The gates are locked to the Echo Canyon parking lot at night, but there is an AJ's parking lot nearby and lots of other places to park a car and crash. Up in Cave Creek (at Seven Springs) there are campsites. But, that is 1.5 hours away.
There are also tons of hotels.

None. The park is closed at night, but people climb The Monk at night, and the occasional ranger can't get up to the Monk anyway. So no worries except for the parking lot being closed at night.