I became interested in the Grenadier Range after I moved to western Colorado. I started to look up information and noticed that many peaks (including Arrow Peak) used to have SP site, which was transferred to other owners, and all information regarding these peaks was erased. This site had only photos, and comments. No text at all. I read all comments on Arrow Peak SP web page, and understand that it used to be a well done and informative source. I will try to do my best to update it and bring new information in. Thank you.

Arrow Peak lies within the Grenadier Range of San Juan Mountains. The peaks of Grenadier range offer some of the finest mountaineering in Colorado. The high quality of the rock has earned a reputation for fine rock climbs; everything from classic Wham Ridge, to a demanding 18-pitch climb of Silex's east face. If you travel to this country, bring rope and friends you trust.

Historically, the peak has been climbed by William Cooper and John Hubbard on July 15, 1908, the same day they made the first ascent of Vestal Peak. Roof of the Rockies, page 169.
The second summit of Arrow was made on August 11, 1932 by Carleton Long and John Nelson from Arrow Lake, on the south side of the peak. Their difficult ascent line, via the Greystone-Arrow saddle, was not recommended for future climbers. This ascent, believed by Long and Nelson to be the first on Arrow Peak, was recorded in Trail and Timberline, Number 169, November 1932.

No one who has ever made the long backpacking approach will doubt that this is one of the least-accessible ranges in Colorado. It is also one of the most rewarding climbing areas with unique geological features creating stunning landscapes.


The Grenadiers are absent of past mining operations, and hence the numerous paths and roads those activities created. The result is an isolated wilderness, devoid of maintained trails, appropriate for these rugged peaks and valleys. The north faces of the peaks in this range are particularly beautiful. The most popular climbs are from a camp around Vestal Lake. The south side approaches from Balsam Lake are less remarkable, generally long pulls up talus and scree. 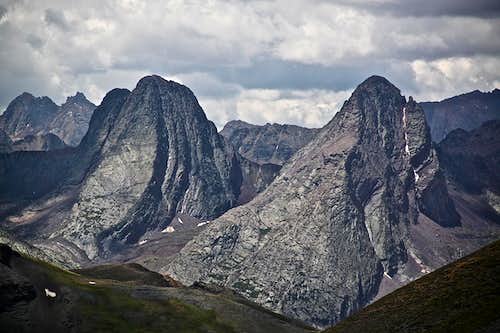 Probably one the best views into Grenadiers one can get - Vestal (left) and Arrow Peak (right). 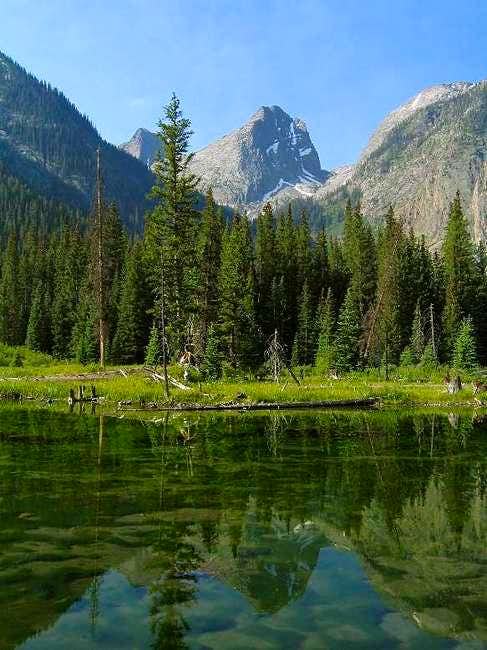 If you take the train from Durango, exit the train at Elk Park. Walk east for 100 yards to the start of the Elk Trail. Follow the Elk Creek Trail north up the hill for a short distance to where it meets the Colorado Trail.

If you elect to hike in from Molas Pass, drive to the trailhead, 1.1 miles north of the pass and 5.4 miles south of Silverton on U.S. 550 (the Million Dollar Highway). Trailhead parking is on the east side of the highway, a short distance off the road. The road to the parking area is signed to Molas Lake and the Molas Trail.

Cross to the south side of the parking area where the trail takes off. After 200 yards, the trail becomes the Colorado Trail, marked by an information board and sign-in register. The excellent trail drops 1,700 feet to the Animas River in 3.3 miles, something to look forward to on the way out.
Cross the bridge across Animas River and walk 0.1 mile southeast along the railroad tracks, where the trail leaves the tracks and heads up the hill to join the trail coming up from the Elk Park stop.

From here, the route is the same, no matter how you got to this point. Follow the Colorado Trail as it heads into the Weminuche Wilderness, and go up Elk Creek for 2.8 miles. The unmaintained trail up Vestal Creek takes off from the far east end of the beaver ponds. The view of Arrow and Vestal from here is hard to ignore.

Follow the faint trail south, past the ponds and into a clearing with a few campsites. The trail re-enters the trees and drops sharply down the banks of Elk Creek. Find a spot to cross the creek. Cross to the south side of the creek and regain the trail. The trail up Vestal Creek isn't difficult to follow from here, but downed timber makes it a bit challenging to stay on it the whole way. In general, the trail stays well above the creek on its east side until 11,000 feet, where you follow the creek as it turns southeast and climbs into the lower meadow at 11,400. This meadow is a good camping spot.

Round trip distance 18 miles from Molas Pass Trailhead or 10.2 miles from Elk Park

Northeast Face (Rosenbrough calls it Northeast Rib): Although certainly no walk up, this is the easiest route on Arrow. From the meadow at 11,400 feet, take the climber's trail southwest to the relatively flat basin between Arrow and Vestal peaks at about 12,150 feet. The route can be seen in its entirety from this spot. It follows either of two prominent ribs (the larger eastern rib is frequently blocked by a large snowbank early in the season).
A faint climber's trail will help you get started. Head up to a grassy area, and work your way onto the large, sweeping ramp. Continue up the ramp, either frictioning up the ramp proper or on more moderate terrain on its left (east) side. As the ramp becomes steeper, the ramp divides into two levels. Work your way onto the upper (right-hand) level, and continue past its east (left hand) margin as it narrows into a rib of rock.
As this rib becomes steeper, it may be necessary to make a short diversion onto its left (east) side, but immediately regain the top of the rib.
The ramp narrows and steepens as you near the low point of the north ridge. Just before reaching the ridge, look for a cairned route on your left (east) that leads to the summit, or choose a slightly more difficult route closer to the ridge.
To descent, carefully retrace your steps.
This route is not the place to be during a rainstorm. The quartzite slabs, so much fun when dry, can become your worst nightmare when wet. The view of Wham Ridge on Vestal from this route is amazing.
Northwest Face - The October 1969 Trail and Timberline reports a climb of the northwest face via the Arrowhead pinnacle on Arrow's west shoulder. The route starts at the lowest point at the base of the west face and climbs eleven or twelve pitches to the top of the pinnacle. From the pinnacle a 60 foot rappel into the notch is followed by 150 feet of scrambling to the main summit. The route is rated as III 5.7.
East Face - The east face is cut diagonally by two "parabolic appearing curves". The route, as reported in the June 1963 Trail and Timberline, starts on the lower or southern ramp and traverses right to a ledge and gully system which parallels the ramp. Ascend the ledges and gully system for two or three leads and traverse right to a crack system for two pitches to a sloping  grass-filled crack. Traverse left to a large platform. The last pitch climbs slightly right to the easy summit slopes. There are a total of 8 pitches of lower fifth class climbing.
North Ridge - Michael Covington reports that Arrow's north ridge is a good fifth class climb. From the lower meadows camping area, the north ridge can be seen rising from the canyon below. At an elevation equal to that of the lower meadow is a band of trees diagonally from left to right, leading onto the ridge. Although the climbing amongst the trees is easy, a slip would be disastrous. After climbing 3 rope pitches up through the trees, you reach the upper band of trees leading out onto the north ridge. Once on the ridge, five pitches ranging from fourth class to 5.6 on excellent rock are followed by two loose, fourth class pitches. After the two fourth class pitches, scramble hundreds of feet to the final summit ridge. All belays were on good ledges or stances.

Marmots are a genus, Marmota, of squirrels, so generally they are large ground squirrels. They live in mountainous areas. Marmots live in burrows, and hibernate there through winter. Most are highly social, and use loud whistles to communicate with one another, especially when alarmed.
Marmots mainly eat greens and many types of grasses, berries, lichens, mosses, roots, and flowers.