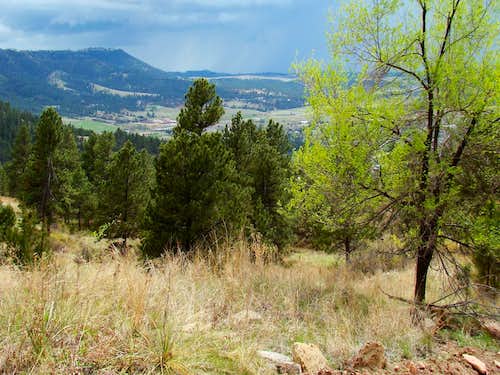 In ancient times, Battle Mountain was used by Native Americans for flint to create arrowheads. According to legend, the thermal springs of the Fall River valley became popular to Native Americans, ultimately leading to a battle in 1869 between the Cheyenne and Sioux tribes for control of the springs, hence the name “Battle Mountain”. Battle Mountain is located in the Black Hills region called the Dakota Hogback which is a ridge composed of steep rock strata protruding from the surrounding area. The Dakota Hogback ridge was formed from Dakota Sandstone that was thrust upward by a granite intrusion, when the Black Hills were formed. It is interesting to note that the Dakota Sandstone Hogback spans an area from northeastern Wyoming to northwestern South Dakota as an elliptical dome that encircles the Black Hills. 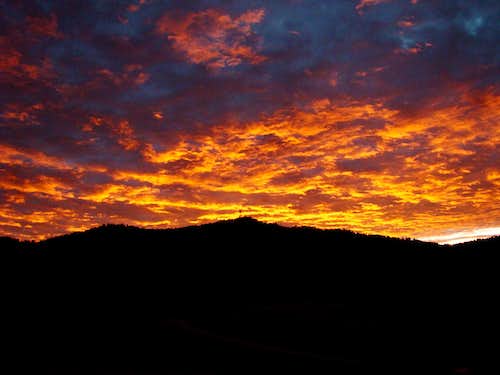 A favorite of local hikers and geocachers, this mountain rises from the Fall River in Hot Springs nearly one thousand feet. The summit of Battle Mountain is the site of several radio and other communications towers. Unfortunately, in a few places this obscures an otherwise commanding view of Hot Springs, the Black Hills and the plains on the southern edge of the Black Hills. Nevertheless, one can still see many of the peaks to the north, the Seven Sisters Range to the south and Angostura Lake at the southeastern edge of the Black Hills. The nearby city of Hot Springs is an Old West resort town, dating back to the late 1800's, where people have long enjoyed the refreshing mineral waters, heated by nature. Besides the many things to see and do in Hot Springs, nearby Wind Cave National Park and Custer State Park offer additional camping, hiking, climbing, and nature viewing opportunities. The old ghost town of Cascade Falls is not far south of Battle Mountain, and the actual falls have long been a favorite place to swim. Many Hot Springs residents like to stay in town and soak their feet in the mineral waters of the Fall River. Most summer days will see children playing in the river. The Evans Plunge in Hot Springs is built over several 87-degree thermal springs that feed the swimming pool with over 300,000 gallons an hour, effectively flushing the pool every 90 minutes. Angostura Reservoir is just 20 minutes southeast and is one of the largest recreational lakes in the Black Hills region. 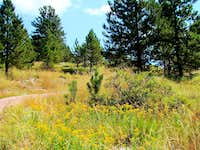 Wildflowers along the trail 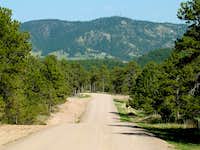 Since Battle Mountain sits right at the northeast edge of Hot Springs, finding your way to the summit is not difficult. Unless you can obtain permission to bushwhack your way to the summit, the only route up is just off Highway 385. Turn east on Thompson Road. Two blocks east, you will come to Battle Mountain Road, which is often a high clearance or 4-wheel drive road. This is your route to the summit. You can park anywhere along the road where you will not obstruct traffic.

The condition of Battle Mountain Road is often not good and generally gets worse as you ascend the mountain. Unfortunately responsibility for care of the road seems to be a point of political contention with the result that the road maintenance gets neglected. Following heavy rains or spring runoff, the road can get very rough, making it tough for all but 4-wheel drive vehicles to get through. The advantage of the rough condition of the road means that as you hike, it will be unlikely you will encounter any vehicle traffic. 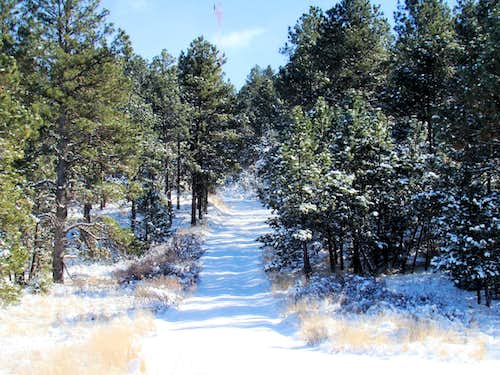 Just a few hundred yards past the GPS boundary sign, there will be a branch in the road. You should stay to the right and continue up the mountain. A short way beyond that junction, you will see a steep branch to the right. If you follow that, it will take you between two rocky cones. The east cone is obviously the higher and the true summit. The radio towers are fenced in and clearly marked "Do Not Trespass". But, you can still find plenty of great views without trespassing. The elevation gain from the trailhead to the summit is about 900 feet and the distance is 1.4 miles. Battle Mountain lies in the Hot Springs USGS Quad. Good maps for the Battle Mountain area include the Black Hills South map by National Geographic and the National Forest Service Black Hills map. 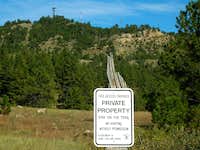 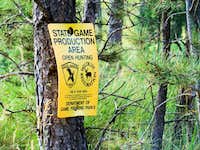 There are no permits needed to hike to trail. Please resist any temptation to ignore the "No Trespassing" signs. Camping and fires are not allowed on the mountain, since the some of the land belongs to the State Department of Fish & Game and the rest is private property. There is a road that branches off the road/trail to the summit. It veers to the north near the summit, and winds around to the northeast for just over two miles. It takes you around the north side of the mountain, down into a valley, up the side of a canyon, through more forest, and out into a meadow before it ends near Friendshuh Mountain. This whole 5,000-acre area along this road belongs to the state of South Dakota and is managed by the state Department of Fish & Game. It is known as the Battle Mountain – Friendshuh Game Production Area. It is OK to hike here, but be aware the local population likes to hunt in season here. It is a wise precaution to wear bright orange while hiking in this area. 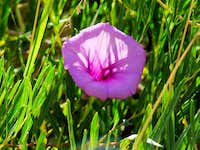 Battle Mountain may be climbed year around, except during emergency conditions. Because of the grade and lack of maintenance, winter ice and deep snow can be prohibitive. Summer lightning and hail also tend to discourage most visitors. For the latest weather forecast and conditions, check out the link below: Battle Mountain – Hot Springs Weather Forecast & Conditions During hunting seasons, the summit area is popular with area hunters. For more information on when that occurs, check out the link below: South Dakota Hunting Season Information 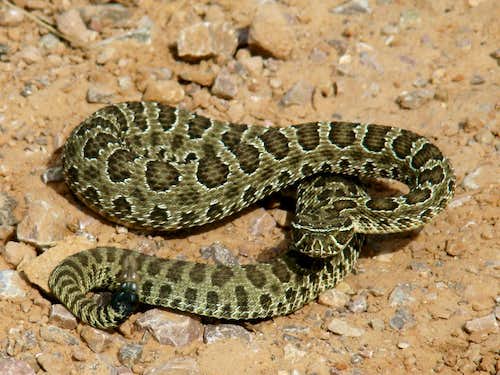 Watch where you step! 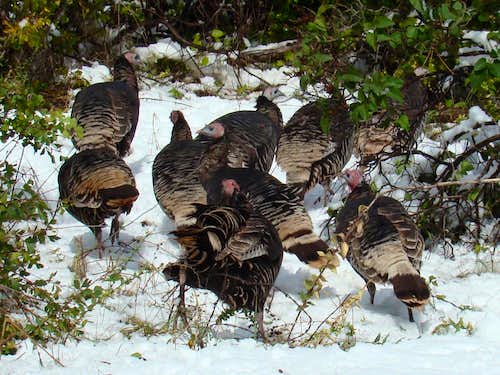 A small flock of wild turkeys

While most of the mountain is covered with ponderosa pine forest, some aspen can be found. The forest on Battle Mountain is home to a variety of wildlife. 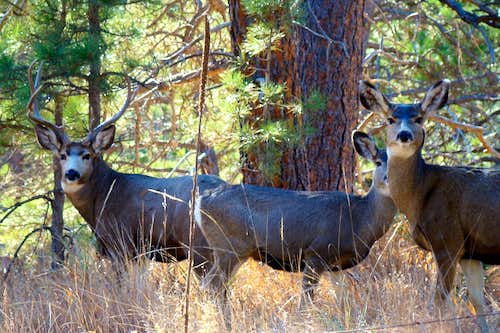 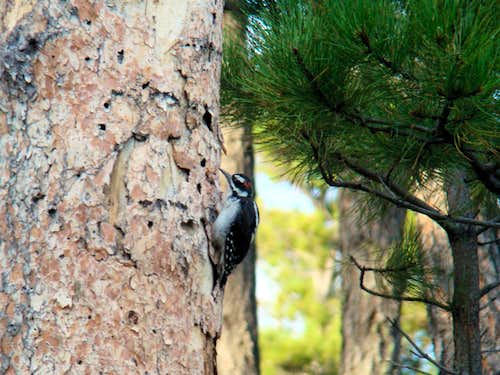 The most common wildlife seen there are deer and pronghorn antelope. But, other species include elk, mountain lions, coyotes, porcupines, foxes, and an abundance of rabbits. Like the entire Black Hills region, there is an abundance of bird species, though wild turkeys seem to make themselves the most apparent at times. There is a rattlesnake population there, so be careful please! 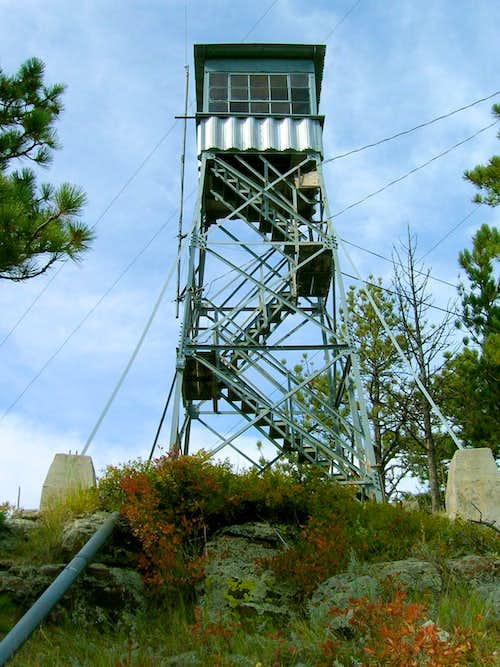 The fire tower at the summit of Battle Mountain 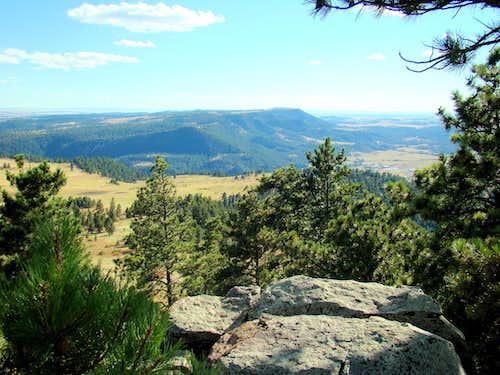