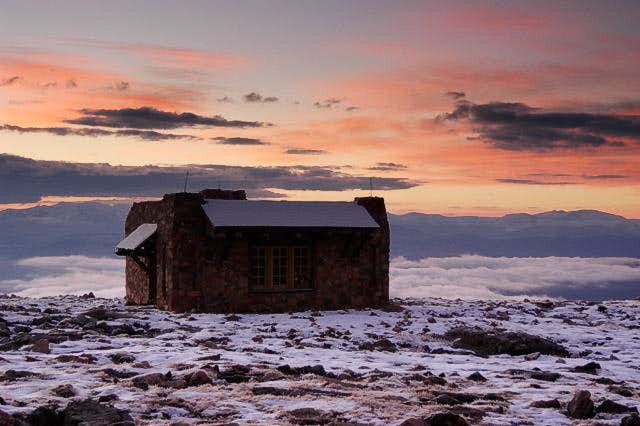 The Notch Mountain Shelter
Photo by Jack B

Rising to 13,237 feet although not a ranked Thirteener, Notch Mountain holds the dubious distinction of being the mountain that blocks the view of Mount of the Holy Cross and its namesake snow cross. However for this same reason, Notch Mountain is the perfect place from which to view Holy Cross. Notch Mountain’s higher, yet in a way more humble, southern neighbor, UN 13,248 is ranked. Suspended high in the Rocky Mountain air and part of a long mu (μ)-shaped system of ridges, Notch Mtn. and UN 13,248 are important parts of the famed Halo Route on Holy Cross Ridge 13,831 and Mount of the Holy Cross. Come and walk the highway in the sky, but beware of the weather!

In the mid nineteenth century, as the high country of Colorado was being explored, reports of a peak with a cross on its side began to circulate. A while later, it became clear that there was a high mountain with a large cross on its side formed out of snow. Finally in the August of 1873, a survey party led by Dr. Ferdinand Hayden, and including the photographer William H. Jackson, ventured into the wilderness above the Eagle River and located Mount of the Holy Cross. On August 24, two parties set off in different directions, the first to attempt to climb Mount of the Holy Cross, and the second, which included Jackson, to climb Notch Mountain and hopefully photograph the cross. Both parties were successful that day; one making the first known accent of Mount of the Holy Cross, and the other reaching the top of Notch Mountain, where Jackson took his famous picture of Holy Cross and its namesake cross. In the decades that followed, the area became a popular destination for religious pilgrimages. In the mid-1920’s a stone cabin was erected on top of the southern ridge of Notch Mountain to accommodate visitors. Due to the popularity of the area, in 1929, the area was declared a national monument by Congress. In 1950, the national monument status was rescinded. 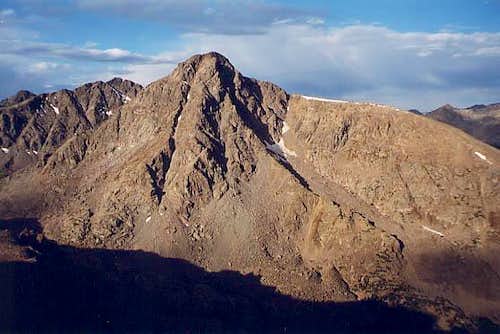 From the Denver area, take Interstate 70 west past Vail. Roughly a mile and a half past the end of West Vail, you will come to Exit 171. At this point, leave 1-70 and take Highway 24 south. After about 2 miles you will arrive at the town of Minturn. From the center of Minturn, continue south for about 2.8 miles until you come to a turnoff to the right that is signed "Tigiwon Road (FS 707)" (this turnoff is .2 miles before (north of) the bridge that crosses the Eagle River). Turn right here and follow the Tigiwon Road for 8.2 miles to the Half Moon Campground and Trailhead.

Tigiwon Road is rough. 4-wheel drive is not needed, but a vehicle with a fair amount of clearance should be used. Any stock pickup truck or SUV will have no problem. You probably could drive any (within reason) passenger car up the road, but you would have to be extra careful along the rougher stretches. This being said, you may come to regret it.

Individuals or groups going on any overnight excursion into the Holy Cross Wilderness are required to have a free wilderness use permit. The permits are available at the trailhead. The permit has two parts, the filled out white part goes into the box, and the yellow tag is kept in possession of the hiker.

July through September are the prime months for visiting the area. Late spring through early summer may also be a good time to venture into the area if you want to play in the snow. Be aware of avalanche danger and carry the appropriate gear for travel and any possible emergencies.

In winter, the route from Halfmoon Pass and the North Ridge is usually safe from avalanches, and is the recommended winter route. Under certain conditions, the slopes below Halfmoon Pass might slide, so use caution, but you can usually avoid all the danger by staying in the trees below the pass. The ridge itself is usually blown pretty clean of snow.

Tigiwon Road is closed in the winter, but is maintained as a groomed snowmobile track. While this makes for faster hiking, be aware that instead of one track along the road, there are several groomed snowmobile tracks which can make navigation difficult. This is especially true on the return. Whatever you do, don't take the first right on the return trip, unless you want to backtrack with an extra two miles and 1000 feet elevation gain.

You can camp at the Half Moon Campground. A fee is charged (probably $12-13.00 per night). Camping is allowed in the Holy Cross Wilderness. For more info see the Mount of the Holy Cross page. 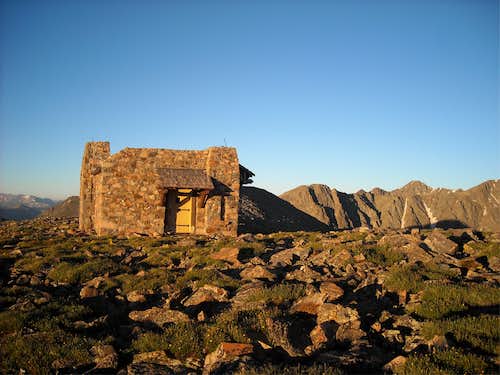 In 1924 (or 1934, depending on who you talk to), the Notch Mountain Shelter was erected to accommodate the hundreds of people who hiked up the Notch Mountain Trail on pilgrimages to view Mt. of the Holy Cross.  The shelter is a stone cabin with a concrete floor, with a window that faces Holy Cross, a fireplace, and a stout picnic table.  In recent years some work has been done to the shelter, including replacing the window that had for many years been broken (and the open hole plugged with a stack of rocks).
It used to be possible to sleep in the shelter.  However, the Forest Service has since prohibited this practice.  This change in regulations was made in an effort to preserve the historic building.  You are allowed, however, to utilize the shelter as refuge from lightning storms, as it is equipped with a lightning rod.


The following information has been preserved for informational purposes:

Sleeping in the shelter would only require a sleeping bag and pad. Be warned that there are mice in the shelter. Make sure that you hang up everything that they might want to eat or chew on: food and things with salt on them (including boots). A length of cord comes in handy for hanging packs and other items from the rafters.

Here are a few winter notes/obseravtions that may be of use to this page.

1. The Tigiwon Road is a groomed snowmobile track in the winter. While this makes for faster hiking, be aware that instead of one track along the road, there are several groomed snowmobile tracks which can make navigation difficult. This is especially true on the return. Whatever you do, don't take the first right on the return trip, unless you wamt to backtrack with an extra two miles and 1000 feet elevation gain.

2. In winter, the route from Halfmoon Pass and the North Ridge is usually safe from avalanches, and is the recommended winter route. Under certain conditions, the slopes below Halfmoon Pass might slide, so use caution, but you can usually avoid all the danger by staying in the trees below the pass. The ridge itself is usually blown pretty clean of snow.

Use Trail from Halfmoon Pass