Horseshoe Mountain sits in the heart of the rugged Lost River Range in central Idaho. 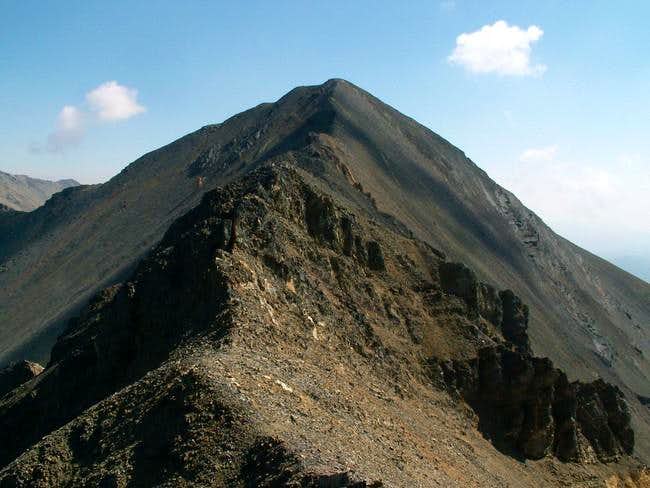 Horseshoe Mountain is a massive pile of precipitous talus and unpleasant scree. The summit region is extremely steep and especially impressive when viewed from the east. Its western face is made up of a series of complicated, yet beautiful, series of ridges and towers. Horseshoe Mountain's northwest face sits at the head of a an unnamed drainage and consists of an 1,800 foot wall of loose, impassable rock.


Geographically Horseshoe Mountain sits in the exact center of the Lost River Spine, just to the south of Doublespring Pass. Just as many other obscure, yet impressive mountains in the Lost River Range, Horseshoe Peak is seldomly visited.

Thousands of years ago the Lost River Range was located beneath an inland sea. This is evinced along the slopes of Horseshoe Mountain as the remains of ancient sea critters have left their marks in a remarkable display of fossilization on the barren slopes of the peak.

It has been reported that Rick Baugher, a famous Idaho mountain pioneer, made the first ascent in 1993 and placed a horseshoe, rock cairn, and summit register in the form of a peanut box, which is now empty, on the summit, therefore giving the name Horseshoe Mountain. However, during my exploration of this peak and its subsidary ridges, I discovered a dishoveled USGS marger scattered in the scree slopes marking a 1924 ascent, so the it remains a question to whom really summited it first.

To access the West Ridge Route, drive on this improved gravel road for about 5.5 miles, or to the roughly to the point where the road crosses the 7,400' contour line on the TOPO maps.

To access the East Ridge Route, drive over Doublespring Pass and turn onto Horsehaven Pass Road keeping right at two forks at .3 miles, and 1.9 miles, respecively. At this point, a four-wheel drive vehicle is required. Continue 8 slow more miles until reaching Mahogany Creek Road. Follow this short and rough road for access to the East Ridge Route.

This route, albeit short in mileage, is a great adventure, leading through thick brush, pleasent forests, horrible scree, and difficult scrambling.