Doublespring Peak is located in the Lost River Range of central Idaho. 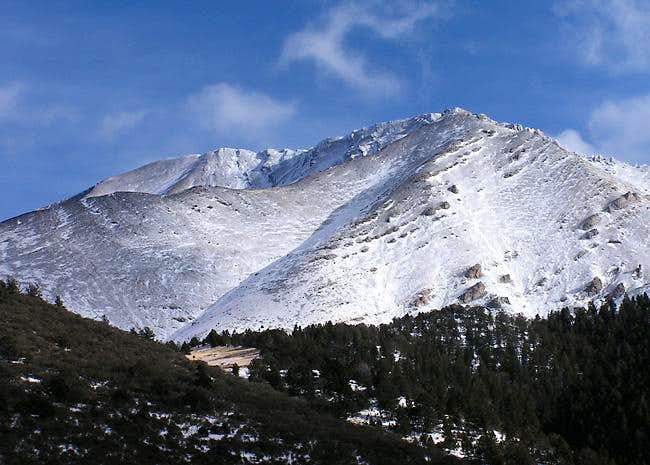 Doublespring Peak, Idaho's 38th highest summit, is elusive mountain as its true summit is not easily seen from any direction. It is a complex mountain made up of a complicated series of ridges and drainages. Unlike many other Lost River Peaks, Doublespring Mountain's terrain , although quite steep, is, for the most part, gentle in nature.

Doublespring Peak, nicknamed for which the pass it towers over, has a half-mile long summit ridge that runs southwest to northeast. The highest point is found near the eastern end of it. The peak is quite large and has several impressive faces that drop steeply into the winding drainages below. And, for those who are interested in chasing peaks with great prominence, Doublespring Peak has over 2,000' of it as it is the highpoint in a small cluster of peaks located between Mount Borah to the south and the Pahsimeroi Subrange to the north. Several other attractive peaks are located in this area.

Because of Doublespring Peak's close location to the most popular state highpoint Mount Borah, and the fact there are vitually no services around, only a handful of people have climbed this mountain. The mountain was reportedly first climbed by R. Baugher in 1991, however, during my party's ascent we found a USGS Benchmark near the summit challenging the statement of the first ascent. Whoever made the first ascent doesn't matter as it was Baugher who first reported several routes reach the top.

Although the terrain isn't as unforgiving as other sections of the Lost Rivers, don't claim this peak is an easy climb. Its summit is blocked from most directions by massive, impassable, and classic, rotten talus fields. The easiest route is a class II climb from the north. The rolling high valley above tree-line is reminiscent of climbs in Colorado.

To access the Cayuse Canyon Route from the nearest major airport in Hailey Idaho, is no easy task. Accessing requires driving over three rugged mountain passes on dirt roads.

Drive north from Hailey on Idaho 75 for 13 miles until reaching Ketchum. Turn right (east) on Sun Valley Road, which turns into Trail Creek Road and follow it 15 miles to Trail Creek Summit at 7,900'. The last few miles are on a good gravel road.

Follow Trail Creek Road down through upper reaches of the Big Lost River Valley for about 30 miles until reaching Highway 93 at the base of Mount Idaho. The last 10 miles are on pavement again.

From this point, a four-wheel drive vehicle is recommended. Follow the slowly deteriorating road 4 miles until reaching Horseheaven Summit at 7,900'. Either park here or drive a short distance up a single track road through the field to the mouth of Cayuse Canyon.

This is pure backcountry terrain, no gas, services, or other people will be there to help in need. Make sure to have all necessary equipment.

All of the back country roads are closed during winter in this area.

The Lost Rivers are consequently in the rain shadow of ranges to the west, therefore they do not recieve as much snow as their counterpart ranges and have a slightly longer climbing season. There has never been a recorded winter ascent of Doublespring Peak but one would imagine in a dry year it may not be too difficult with a class II approach.

The snow free months, depending on which year it is, run roughly from late-June throug October.

There are no established campgrounds in the area.

Car camping is highly recommended as most of the terrain on this mountain is highly exposed to the elements.