White Cap Peak, or Mount Obsession as some people know it, stands as Idaho's 17th highest mountain. Although its feature's aren't nearly as impressive as some of its higher neighbors, this is an outstanding mountain and a classic climb. 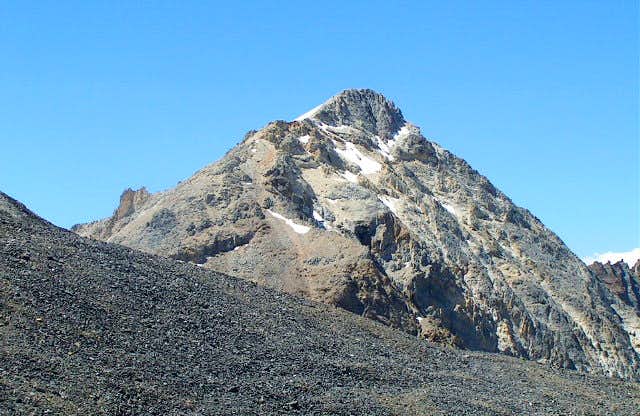 This mountain's appearences are as different as day night depending on which direction it is being viewed. White Cap's southwestern slopes are broad and steep but without many obstacles, rising nearly 6,000 vertical feet above the Big Lost River Valley. While its rarely viewed north face plunges nearly vertically 2,000' below to Pass Lake.

White Cap Peak is rarely, if ever climbed for several reasons: the Lost River Range is remote, containing rough roads and barely maintainted trails, (except of course for the popular state highpoint, Borah,) White Cap Peak is among some of the highest peaks in the state, and is often overlooked by people wishing to complete the Idaho 12ers, and and its difficult, nearly trailess approach.

Named by homesteaders for the bright, white quartzite summit, and long lasting snowfields, this mountain includes a numer off class 3 climbs, and one class 2.

The first winter ascent was made in 1975 by W. March and R. Albano from the west ridge.

The primary approach is via the south ridge from Sawmill Gulch.

From Mackay, drive 13.1 miles northwest on Highway 93. Look for a sign saying Sawmill Gulch and a road the cuts up the alluvial fan to your right. Take this turn.

The Sawmill Gulch road is a tough one indeed. The topo map indicates the road stopping at Coyote Spring. The road was extended much further after the maps were created for mining purposes. After 2.7 miles of car crushing road, Sawmill Gulch "road" then becomes impassable for even the toughest cars. Park in a small pullout on the left.

From the parking area, you have two options to gain the south ridge of White Cap Peak.


Option 1 From the parking area head due north and bushwhack your way onto the ridge above. Once you have gained the ridge, turn northeasterly and head for Pt. 11,045. Just before reaching the unnamed point, a steep, class 3 boulder field awaits you. Climb up and over Pt. 11,045 after crossing the field and continue on the ridge.

Option 2 The second option is a little more easy and scenic. From the pullout continue treading up Sawmill Gulch Road. The road, after passing through some talus fields, will switchback up the ridge. At this swtichback look for a faint trail in the trees that continues up the gulch. This reaching Sawmill Pass in two steep miles and offers unbelievable views of Leatherman Peak. 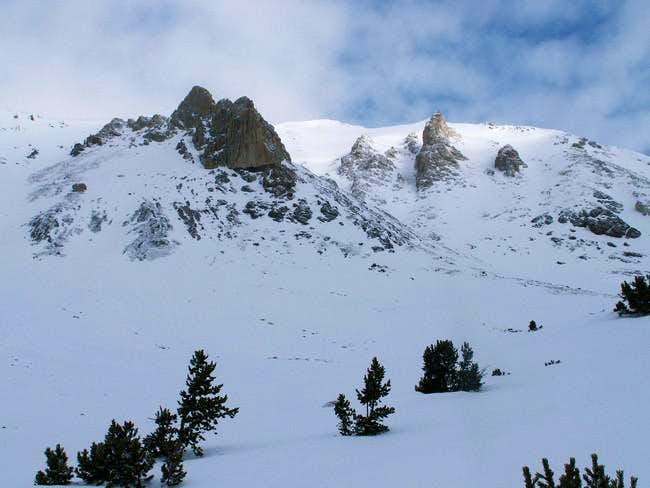 From here, it is an easy walk up the scenic ridge of White Cap Peak.

This terrain is wide open and free, no red tape to be found here.

Because of White Cap Peak's relative closeness to a highway, an approach anytime of the year would be feasible. Winter conditions would only be moderately difficult because of the open nature of the south and west ridges.

Camping is possible anywhere from the turnoff for Sawmill Gulch Road to Leatherman Pass or Sawmill Pass. Chances you will see some one else are slim to none.

Again, this is high and wild country, be prepared for surprise thunderstorms, snowstorms, or cold weather. 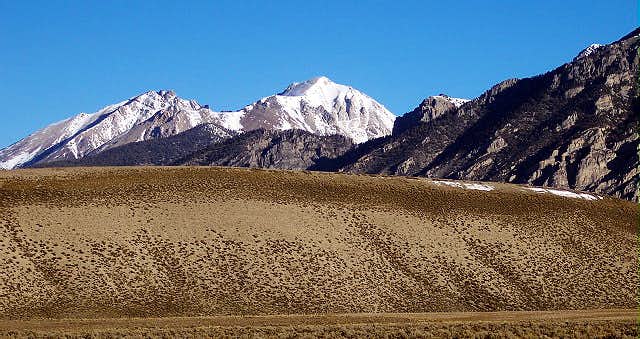