”In my opinion, the two most rugged mountain ranges in Colorado are the Gore Range northwest of Dillon Reservoir and the Needles Range in the remote San Juan Mountains.” -John Fielder-famous Colorado Landscape photographer. The Gores are more of a range consisting of 12-13,000-ft ridges, rather than separated peaks. A few of the more prominent ridges actually have names like, Zodiac Spires, Rockinghorse Ridge, Ripsaw Ridge and the Grand Traverse. With 50 peaks over 12,000-ft, none attain the magic 14,000-ft mark, which is the primary reason for the Gores obscurity. This is one of Colorado’ most rugged mountain ranges and the rock quality is generally good. Only 60 miles from Denver, Colorado the Gore Range as a whole is relatively inaccessible due to the lack of mining roads that normally criss-cross other Colorado mountain ranges. The Gores also have a reputation for a lot of trailhead access red tape, due in large part to private property. Hikers and climbers not interested in long approaches and heavy vertical might want to look elsewhere for their adventure. Overall, the west side of the Gore Range is more accessible than the east. Approaches that start from the east are few because of private property, in return, expect even longer approaches and expect a poor network of trail systems. Precise planning and execution are of paramount importance when selecting routes in this range. Armed with a loaded backpack and good maps, many of these quiet summits can be climbed without a rope. Major faces and long jagged ridges provide unlimited technical climbing opportunities as well. An ice axe is highly recommended on any early season climbs. Officially named peaks in the Gore Range are hard to come by, only a few of the Gore highpoints have official names. Differentiating the highpoints on a map or while hiking has challenged all of us at some point. Thankfully we have the CMC to make sense of all of that rugged terrain. In 1932, CMC members Carl Erickson and Edmund Cooper used letters to assign summits in the obscure Black Creek Basin and the CMC subsequently tended and expanded the system (Jacobs & Ormes- Guide to Colorado Mountains.) The lettering system for naming peaks has frustrated many casual visitors over the years, however Gore Range enthusiasts, or "Gore-cores" seem to embrace the system.

In the spirit of exploration, my SP pages representing the eastern peaks of the Gore Range will intentionally leave you with some homework to do. My route descriptions will be in guidebook form and may seem vague. I will not submit a topographic map. However, I will give you the standard route beta you need to climb the peaks. If you need a topo, e-mail me and I will be happy to send one your way. I spent 2 years meticulously studying updated area TOPO maps. I climbed 22 peaks residing on the western aspect of the range before adventuring the east. During that span I was very fortunate; I lucked out in locating the right people willing to share route beta for these peaks. I intend to honor the idea of keeping the eastern peaks as pristine as possible for those who are willing to put in the time researching the area. My forthcoming pages and route description should be used with a good map. 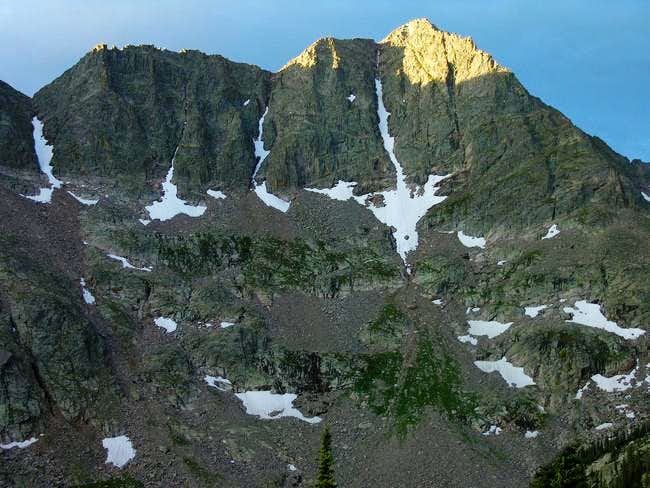 The North Face of Peak R

In 2002 the USGS unofficially added 5 feet of elevation to all of Colorado’s mountains. The great Peak R or “Mount Bledsoe" was one of five peaks that tiptoed over that magic 13,000-ft benchmark. Prior to 2002, Peak R topped out at 12,995-ft. Going forward, Peak R is a superstar 13er at 13,000-ft. Anyway you look at it, the new recognition never moved Peak R away from the remote Upper Slate Creek area. Peak R is still a long way away from anywhere. Standing in the cold shadow of Peak R’s huge north face, for me, life suddenly took on a simple but overwhelming perspective. In this place, I am nothing. Undoubtedly, I was in the shadow of greatness. I should have been down on my knees and paying homage to the great Gods of erosion and commending their fine handiwork. I seized that moment and will never forget it. Peak R is an absolutely stunning mountain. Its greatness resides just east of another great mountain Peak Q/ “Prisoner Peak”, and just south of a slightly greater mountain, Peak L/”Necklace Peak.” Together, these three mountains team-up to form the inspiring backdrop of Upper Slate Lake. Like Peak L and Q, you have to really want Peak R to visit its summit. Most climb Peak Q and R together. Be prepared for a 23 mile RT to get both peaks. The trail system above Upper Slate Lake is basically void. The bushwhacking above and beyond the lake is as tough as is gets. There is “tough bushwhacking” and there is “tough Gore Range bushwhacking,” be prepared for the Gore Range kind. It will be dense and likely wet. I highly recommend climbing the tougher Peak Q first, and using its view to locate the tricky route up Peak R. From below, Peak R looks more technical than it really is and locating the exact line above the cliffs from Peak Q will expedite your day.

Because of private property, access to the east side of the Gore Range and to the Gore Range Trail is limited. There are three potential trailheads for this climb. All three will get you to the Gore Range Trail, a trail that runs north/south allowing access to the different drainages located on the eastern side of the Gores. The following RT and Vertical Gain statistics are for the approach to Upper Slate Lake only. Most climbers like the public accessible Brush Creek TH (9,050-ft) and some like the Rock Creek TH (9,490-ft.) I will describe the lesser known of the three, the Boulder Creek TH (9,470-ft.) This one requires a bike ride, but it will save you 3 miles RT and 650-ft over the Rock Creek TH, and 2 miles and 400-ft from over Brush Creek TH. BTW, you need a 4-wheel drive to get to the Brush Creek TH. I will add directions to the Brush Creek TH in time. The Boulder Creek TH is located on private property, however the owners allow access to the Boulder Creek Trail from the trailhead. Here is the kicker; you cannot park at the trailhead. This is where a bicycle comes in handy. From I-70, exit CO 9 at Silverthorne and drive 9.1 miles and exit left on Boulder Creek Road. Locate the public parking area at the junction of both roads, it is signed. Boulder Creek Road is an improved dirt road; there is no need for high clearance. Drive 1.7 miles to the end of the road where it is fenced off and there is a private residence on the left. Unload your climbing companions and gear. There is no sign for the Boulder Creek TH. Return 1.7 miles to the parking area and bike back to your climbing buddies. This should take around 30-40 minutes.