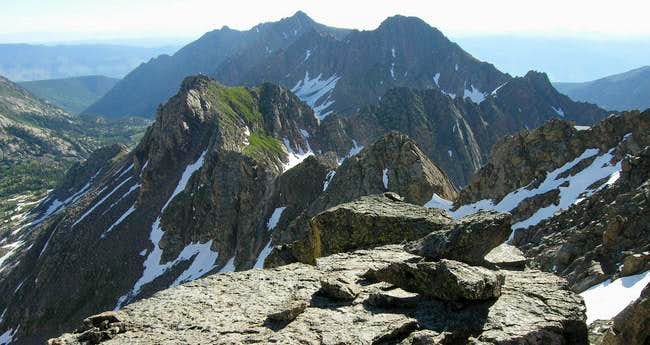 The main spine of Colorado's Gore Range
”In my opinion, the two most rugged mountain ranges in Colorado are the Gore Range northwest of Dillon Reservoir and the Needles Range in the remote San Juan Mountains.” -John Fielder-famous Colorado Landscape photographer.

Peak V or the unofficially named “East Partner Peak” (13,057-ft) is undoubtedly the trophy peak of the Pitkin Creek Drainage, a popular hiking area near Vail, Colorado. It’s classic pyramidal shape and fierce southwest face pack a serious punch in the “scenery” category. From any perspective "East Partner" shows like a perfect pyramid; and combined with Peak U “West Partner Peak,” (13,047-ft) and one rugged connecting ridge, the two “Partners” form the awesome backdrop to the picturesque Pitkin Lake Basin. Even if you’re not a climber, the high Pitkin Lake Basin makes for a perfect place to visit in the cool months of spring and summer.

“East Partner Peak” resides within typical central Gore Range terrain, which includes some of Colorado’s most beautiful mountains. Its summit is part of the main, and central spine of the Gore Range which runs from Eagles Nest Mountain southeast to Red Buffalo Pass, just north of Demming Mouuntain. Geologically, "East Partner” is mostly made of gneiss which accounts for the fractured and slabby nature of the summit pyramid. Other notable nearby summits include Peak W, Peak X, the Solitude Massif, and “Outpost
Peak.”

"East Partner Peak" has a reputation for being a tough climb in part because of the lack of current route beta. "East Partners" story says something about exposed class 4 climbing. However, with proper route finding the easiest route is more like steep and solid class 3. So, maybe “East Partner” isn’t as tough as advertised, but don’t be fooled by my report, the mountain is relentlessly steep. Be prepared to for 2000 vertical-ft of climbing in the last mile!

Locating the Pitkin Lake Trailhead is easy. From Denver, take I-70 west, past the Eisenhower Tunnel and on to the popular ski towns of Dillon and Silverthorne. Continue past Copper Mountain Ski Resort and on to Vail Pass. From Vail Pass, descend down to the city of Vail, Colorado and take exit 180, your first Vail exit on the right. Turn right and quickly make another right and drive about .2 mile east. Look for the trailhead on the left next to some private condos.