Pitkin Drainage
Only 60 miles from Denver, Colorado the Gore Range as a whole is relatively inaccessible due to the lack of mining roads that normally criss-cross other Colorado mountain ranges. The Gores also have a rep for a lot of trailhead access red tape, due in large part to private property. Hikers and climbers not interested in long approaches and heavy vertical might want to look elsewhere for their adventure. Overall, the west side of the Gore Range is more accessible than the east. Approaches that start from the east are few because of private property, in return, expect even longer approaches and expect a poor network of trail systems. Precise planning and execution are of paramount importance when selecting routes in this range. Armed with a loaded backpack and good maps, many of these quiet summits can be climbed without a rope. Major faces and long jagged ridges provide unlimited technical climbing opportunities as well. An ice axe is highly recommended on any early season climbs. 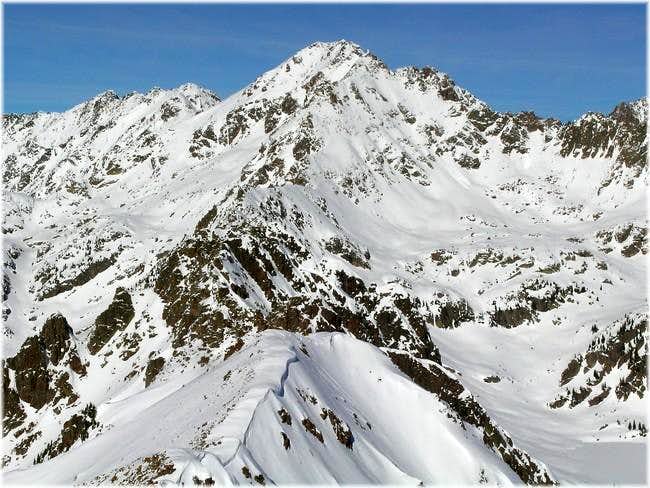 Pitkin Lake Basin is home to five unnamed 13ers, all with local or unofficial names; Mount Solitude, Climbers Point, Vista Peak, East Partner/Peak V and West Partner Peak/Peak U; the latter two being named by the Colorado Mountain Club for their close proximity. The pyramid shaped East Partner (13,057-ft) and the bulky and rugged West Partner dominate the beautiful Pitkin Drainage and clearly lord everything else around.

West Partner is a complex and rugged mountain generally made of good rock. The mountain is encompassed by four major drainages which include the Pitkin Lake, Piney Lake, Booth Lake and the remote South Slate Lake Drainage. The connecting ridge to East Partner harbors constant class 4 and 5 terrian. The ridge from West Partner to Peak P is sometimes refered to as "Rockinghorse Ridge" and is mostly unexplored. To the south resides Outpost Peak (12,362-ft) which marks the end of a two-mile extension of West Partner’s rugged south ridge. West Partner's summit view is extensive given its central proximity within the Gore Range. The view of massive Peak Q or Prisoner Peak (13,234-ft) is inspiring, to say the least.

It is difficult to know which of two reasonable routes to the summit may be the standard route. I'm assuming the standard would be the South Ridge which starts at Pitkin Lake Drainage. However the different Booth Lake approach seems an appropriate alternative. The recently published Colorado Scrambles written by Dave Cooper suggests the south ridge from Pitkin as the best approach and route.

First, when viewing West Partner from Pitkin Lake you cannot see the true summit, what you see is nice rock outcropping and part of the craggy South Ridge Route. The true summit lies about .15 miles north.

The route begins at the low point/saddle between West Partner and Outpost Peak. From here it's long mile of mostly class 2+ and class 3 scrambling, with more than a few class 4 moves to the summit. There is some exposure but the rock is delightfully solid. When possible it is best to stay directly on the ridge crest. Bypassing and traversing towers is occasionally an option.

The word “Green” will forever come to mind when I think of my two days in the Pitkin Lake Drainage. True to its Gore-like Spring reputation, this drainage is as wet and lush a place that I have ever been and easily makes my top ten “most beautiful places” list.

Complete with marshy meadows laced with running streams and waterfalls, countless wildflowers, crystal clear tarns, and shapely mountains that ooze flowing sheets of vertical rock. And directly in the middle of all this beauty rests the glistening, emerald green Pitkin Lake. But with all of this grand scenery comes a steep price to pay, mosquitos! Don’t forget to bring some DEET for it won’t matter how nice the scenery may be for you could be stuck in your tent all day. 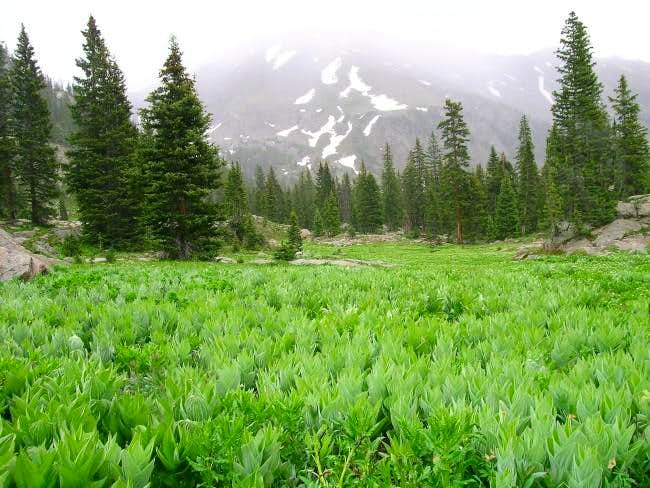 Locating the Pitkin Lake Trailhead is easy. From Denver, take I-70 west to Vail and exit 180, your first exit on the right. Turn right and make another right and drive about .2 mile east. Look for the trailhead on the left next to some private condos. Plenty of parking available. Two night max stay.