”In my opinion, the two most rugged mountain ranges in Colorado are the Gore Range northwest of Dillon Reservoir and the Needles Range in the remote San Juan Mountains.” -John Fielder-famous Colorado Landscape photographer. The Gores are more of a range consisting of 12-13,000-ft ridges, rather than separated peaks. A few of the more prominent ridges actually have names like, Zodiac Spires, Rockinghorse Ridge, Ripsaw Ridge and the Grand Traverse. With 50 peaks over 12,000-ft, none attain the magic 14,000-ft mark, which is the primary reason for the Gores obscurity. This is one of Colorado’ most rugged mountain ranges and the rock quality is generally good. Only 60 miles from Denver, Colorado the Gore Range as a whole is relatively inaccessible due to the lack of mining roads that normally criss-cross other Colorado mountain ranges. The Gores also have a reputation for a lot of trailhead access red tape, due in large part to private property. Hikers and climbers not interested in long approaches and heavy vertical might want to look elsewhere for their adventure. Overall, the west side of the Gore Range is more accessible than the east. Approaches that start from the east are few because of private property, in return, expect even longer approaches and expect a poor network of trail systems. Precise planning and execution are of paramount importance when selecting routes in this range. Armed with a loaded backpack and good maps, many of these quiet summits can be climbed without a rope. Major faces and long jagged ridges provide unlimited technical climbing opportunities as well. An ice axe is highly recommended on any early season climbs. Officially named peaks in the Gore Range are hard to come by, only a few of the Gore highpoints have official names. Differentiating the highpoints on a map or while hiking has challenged all of us at some point. Thankfully we have the CMC to make sense of all of that rugged terrain. In 1932, CMC members Carl Erickson and Edmund Cooper used letters to assign summits in the obscure Black Creek Basin and the CMC subsequently tended and expanded the system (Jacobs & Ormes- Guide to Colorado Mountains.) The lettering system for naming peaks has frustrated many casual visitors over the years, however Gore Range enthusiasts seem to embrace the system. It won’t be going away anytime soon. 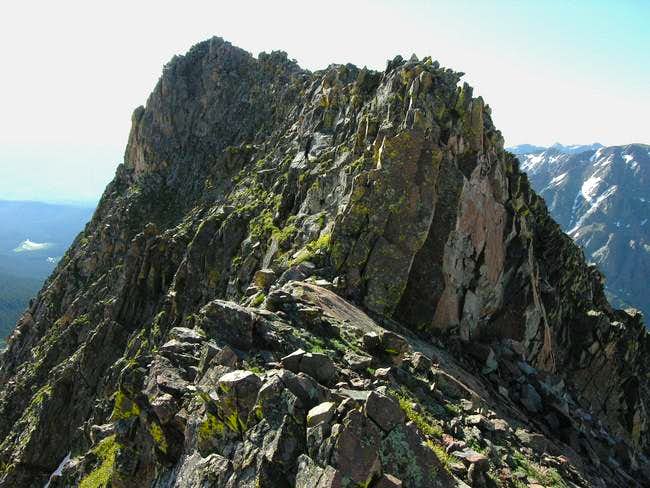 Located about 1.5 mile northeast from the main spine of the Central Gore Range, Peak Z-Prime (12,980-ft) and Z (13,245-ft ) or “Gorgeous Peak” anchors the very rugged ridge of highpoints (Peaks X,Y and Z) that separate the Boulder Creek Drainage and the South Slate Lake Drainage. Both drainages rarely see visitors due to the lack any maintained trail network. Expect pristine wilderness at its best. Upper Boulder Creek is a quiet and lonely place, where only wildlife frequent and the feeling of remoteness and solitude made me nervous. In retrospect, Peak Z-Prime and Z are bad mountains to wait out for a mountain rescue, so stick to your planned route in the area. Peak Z-Prime is not officially ranked, but it views prominent from a few vantages thus the appointed unofficial CMC name. In reality Peak Z-Prime is Peak Z’s most elegant feature as well as its monstrous southeast ridge. Peak Z is the officially ranked 5th highest mountain in the Gore Range and the highest mountain residing between Peak G and the Willow Massif. The south slopes route is a long one. Expect some exposed class 3 climbing (Peak Z-Prime) and 6,700-ft of vertical gain and 15 miles round trip.

Locating the Pitkin Lake Trailhead is easy. From Denver, take I-70 west, past the Eisenhower Tunnel and on to the popular ski towns of Dillon and Silverthorne. Continue past Copper Mountain Ski Resort and on to Vail Pass. From Vail Pass, descend down to the city of Vail, Colorado and take exit 180, your first Vail exit on the right. Turn right and quickly make another right and drive about .2 mile east. Look for the trailhead on the left next to some private condos.

“Red Tape” per attm No permits or fees are required. Like all wilderness areas no mechanized or motorized vehicles are permitted within the Eagles Nest boundaries. Wilderness is land set aside as part of wild America, where man can be a visitor. The natural environment has not been disturbed. Travel is restricted to foot or horseback. No mechanized equipment is allowed. For more information, contact the U.S. Forest Service at the # below: Additional Resources: Eastern Portion of the Wilderness: Dillon Ranger District 680 River Parkway Silverthorne, CO 80498 970-468-5400 or Western Portion of the Wilderness: Holy Cross Ranger District P.O. Box 190, 24747 US HWY 24 Minturn, CO, 81645, Phone: 970-827-5715